Fathom > June 2018 > Israel70 | Young Voices: We must heal our divisions to redeem the world

Israel70 | Young Voices: We must heal our divisions to redeem the world

by Daniel HaLevi
BACK 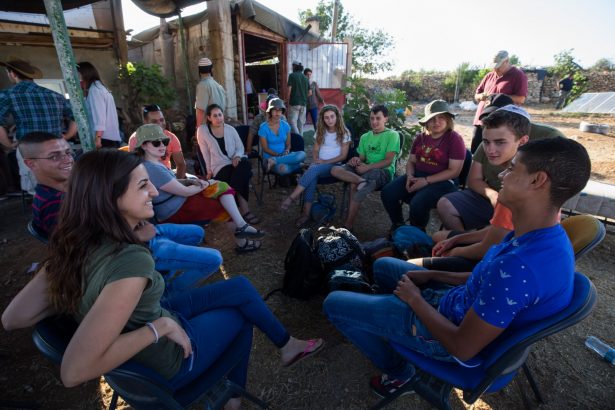 Israeli Jewish and Palestinian youth sitting and talking to each other during a weekly meeting organised by Ali Abu Awwad, a Palestinian from the West Bank.

Daniel HaLevi is the director of a pre-military academy. He suggests that a guide to Israel’s best future can be found in the mantra of his teacher Rabbi Menachem Froman: ‘Peace between man and woman, peace between Right and Left, peace between Arab and Jew.’

As I pass out the song sheets in class –the old Israeli songs of the Second Aliya and the pioneers, which I grew up on – the students look at each other in despair: their eyes say ‘when will we ever finish these songs from Biblical times and listen to Ed Sheeran on our smartphones?’

That’s the reality of being a director of a pre-military academy. In a certain sense your role is to turn back the wheels of progress; to return to the good old days of Zionism and pioneering in an attempt to transmit Zionist values and ‘love of the land’ to the next generation.

My students no longer walk the trails of the Biblical Land of Israel singing the Hora. Their domain is between Hollywood and Alibaba.com. The ethics of the macho warrior and the example of the pioneers’ self-sacrifice for their country doesn’t speak to them as it did to earlier generations. Many define themselves as post-Zionists, and are looking past their army job to the world of hi-tech, which they hope will set them up for a successful future career.

This collapse of values through the encounter with the ‘new world’ is what brought Israel to establish pre-military academies and leadership programs for high school graduates a decade ago; to shape a future generation of citizens ready to contribute, sacrifice and take responsibility.

But the attempt to rewind the film of history and restore the old values can seem hopeless. Our youth are seeking something else, and when youth seek, it is often because something is lacking.

‘Imagine there’s no countries,’ sang John Lennon. Today, in our post-national zeitgeist, his utopian wish can seem more of a reality than he could have imagined. Yet will post-nationalism really bring peace, equality and unity as the song promises? Or will it just awaken a counter-spirit; populist uprisings against the attempts to erase national and collective identities? The election of Trump and right wing parties, increased extremism in the Muslim world, Israeli voters who chant ‘Bibi, King of Israel!’ election after election – to the despair of the liberal media – surely tell us that is a real possibility?

It’s been 70 years since the status quo was set down by Ben-Gurion regarding whether the State of Israel is more Jewish or more democratic; 50 years since the great waves of immigration from Europe and the Arab countries; and the settling of Judea and Samaria is also celebrating its Jubilee. But remarkably, anyone who tries to sketch the political and social map of Israel today will find exactly the same three divisions across society as were present at the founding of the state: the ethnic division (Ashkenazi/Sephardi), the religious-secular division; and the division over the question of settling the land.

Yes. Now, the divisions have become overlapping. Most of those supporting settlements will be religiously traditional Sephardim, while their opponents will often be secular and Ashkenazi.

So where is our society going?

‘Backwards and forwards You formed me, and placed upon me Your hand,’ says King David. ‘Backwards or forwards’ in Hebrew also means eastwards or westwards. And this is the core question of the Zionist endeavour. Should our future face westwards? Did we come home to build a high-tech powerhouse with our neighbours west of the sea? Will we be satisfied with a developed and progressive democracy? Or, is the State of Israel at its core a return to our land, to our past, to our roots, to the land of our ancestors and the Biblical hills east of the green line?

In a speech last January, Abu Mazen claimed that ‘Israel is a colonial project with no connection to the Jews’ adding that ‘they wanted to bring European Jews here in order to protect European interests in the region.’ He repeated these claims to the PLO National Council meeting in April 2018. Despite the pointed historical inaccuracies, it seems that some Israeli Jews who mourn the loss of Jewish identity in the state would agree that modern Israel is too European – it acts as a Western country bereft of identity and authentic roots. But Abu Mazen’s words also conceal within them the question of the Arabs within Israel: Should they meld within Israeli society – in academia, the free market and in the pleasantries of progress? Or should they see Israel as a colonialist, occupying and dangerous force that threatens the values and traditions of Islam – against which they should struggle with all force?

If we could find a protest where both Palestinians and Israeli extremists could walk hand in hand they would be the protests against the separation barrier. Palestinians would protest the intent to disconnect them from the western part of the Israel, while the Israeli right would protest the against being cut off from the eastern part of the Land.

The secular left has already agreed to a Palestinian state, and like them, the educated and moderate camps within the Arab world are ready to recognise an Israeli state in the region.

But the religious Arab world seeks total war against the Zionist idea, which it vows to treat as an illegitimate Western and non-Muslim implant to be extirpated. Similarly the vision of the Israeli religious right, which sees the state as the manifestation of the redemption of the greater Land of Israel, cannot tolerate an Arab state here.

Therefore, rather than a conflict between two nations, there is rather a titanic collision beyond seemingly incommensurable world-views, identities and narratives.

A small land hosting a large conflict – not between two nations but between two forces; one that seeks roots, tradition, and connection to the soil of the Land; while another seeks progress and global unity.

When the Jewish sages referred to the Land of Israel as the ‘middle of the earth’, they didn’t just mean it geographically. Rather they saw the Land as being a microcosm of what takes place across the globe, of Israel as a connector between continents and between cultures, or a place where the world’s troubles begin. And it thus makes sense that from this place there are calls to seek the solution.

2000 years have passed since the times of the Sages, yet here again the Israeli-Palestinian conflict returns to awaken the world from its slumber and face the pressing and urgent issues – questions between East and West; between those seeking progress and those seeking roots; between nationalism and globalisation.

With all its pain, it is the Israeli-Palestinian conflict which reminds the ‘nation which dwells in Zion’ of its past and its roots; roots without which it will be unable to survive in this environment of enmity. It is a conflict that teaches us that even a hi-tech nation needs roots. It is the conflict that exposes ethical issues of human rights, sensitivity to minorities and understanding of the other; and the same conflict that reminds us of the importance of democracy and citizens’ rights. It is the conflict – which ultimately involves a small strip of land – which reminds the technology-driven human of the future that even in the era of the screen we need land.

The need for Israel to maintain its military strength has created a generation that knows to develop one of the strongest armies in the world. But we need also to increase our power to seek peace.

The next generation of Israelis I come across seek to create a more balanced world: between past and future, between tradition and progress, between tribalism and family ties to international unity, between equality and faith in human spirit and a love of the homeland.

It is a long and poignant process. But if it succeeds, it will bring with it blessing and peace to the world.

The mantra of my teacher Rabbi Menachem Froman was often ‘Peace between man and woman, peace between Right and Left, peace between Arab and Jew.’ Yet Rav Menachem, who was one of the most striking activists for peace based on religious encounters in the Middle East, saw within this ‘meeting of opposites’ the purpose of redemption in the world. As he described mystical texts, Rav Menachem would draw his right hand to his left. And would add one other line: ‘Peace between the part of me that loves my people and the part of me that loves all people.’

So simple, yet so demanding.