by Gabriel Noah Brahm
BACK 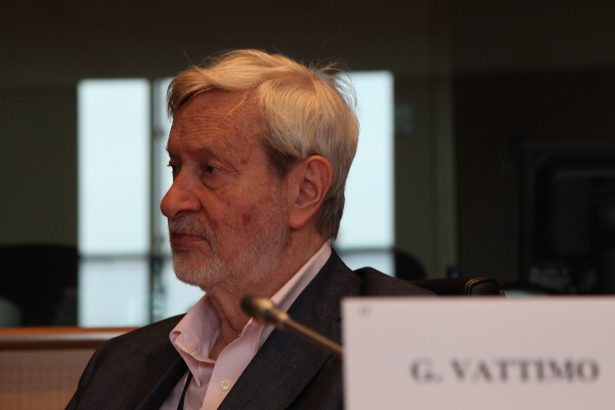 A leading European philosopher has declared for killing ‘Zionists’ and arming Hamas. Gabriel Brahm asks what it all means.

The Haaretz headline says it all: ‘Well-known Italian Philosopher: “I’d like to shoot those Zionist bastards”’. Gianni Vattimo is Italy’s ‘most famous philosopher’ according to Haaretz’s reporter in Milan, Anna Momigliano. And now the world knows he is also a bigot and a supporter of terrorism. Indeed, as I argued in Fathom in June, Vattimo ‘has earned the right to be known as one of academia’s leading anti-Semites.’

At the time, I based my confident assertion on nothing more (or less) than a reading of his vile anthology of today’s ‘post-metaphysical’ philosophy (co-edited with Michael Marder, and including in its pages such luminaries of contemporary thought as Judith Butler, Slavoj Zizek, and Luce Irigaray), Deconstructing Zionism: A Critique of Political Metaphysics. I claimed the book ought to have been better titled ‘Reconstructing Anti-Semitism’. I was right. For, since then, we have learned (from Momigliano and others) that Italy’s celebrated philosopher has openly called for military aid to Hamas – something illegal under laws banning material assistance to terrorists – and expressed the wish to personally ‘shoot Zionists’ if he could, on an Italian radio program. Make no mistake: By Zionists he means Jewish Israelis – as the term has unambiguously come to signify in the devious vocabulary of today’s ‘new anti-Semitism’, which barely hides under this tired, cynical and transparent verbal trick.

So, what does this say about the current state of philosophy – and the world – given that this is what passes for ‘cutting edge’ thought in so many of our elite universities, where so-called ‘postmodern nihilism’ (as Vattimo calls his philosophy) reigns as the ‘avant-garde’ of Western consciousness? It says at least two things.

First, it proves that – if there ever really was any serious doubt that anti-Zionism just is anti-Semitism, the form Jew-hatred takes today – there can now be no doubt about the equivalence between anti-Zionism and anti-Semitism in practice among those who, like Vattimo, unabashedly call for an end to the Jewish state and Jewish sovereignty. In spite – or because of – the genocidal implications of such scenarios, people like Vattimo, Butler, Zizek, and others featured in Deconstructing Zionism, all call for not a two-state compromise in the name of peace but, with Iran and Hamas, a ‘one-state solution’ to the problem of the Islamist refusal to accept Israel’s existence under any conditions. Indeed, in the name of such a ‘solution’, Marc H. Ellis (another contributor to Vattimo’s book) welcomes the idea of a ‘mass exodus’ of Jews from Israel to Europe, in a grotesque parodic inversion of aliyah (Deconstructing Zionism, 108).

Moreover, Vattimo himself expresses – in the name of a philosophical conception of ‘Being’ derived from, of all places, the work of National Socialism’s premier thinker, Martin Heidegger – in print, in a volume of academic scholarship aimed at a university educated readership – unabashed admiration for Iranian theocratic elimimationist anti-Zionism. In fact, as I pointed out a couple of months ago – and take the liberty of reiterating now for emphasis under the circumstances of the current crisis – this is what he says:

For good reasons of international stability, one never dares – or almost never, except in the case of Islamic heads of state like Ahmadinejad – to question the very legitimacy of Israel’s existence…. When Ahmadinejad invokes the end of the State of Israel, he merely expresses a demand that should be more explicitly shared by the democratic countries that instead consider him an enemy (emphasis added, 19).

It wasn’t just a rhetorical flourish, either (but then, why would it ever be tolerated as such, from a leading academician, by those who apparently read such vitriol without batting an eye?).

More recently, the very same ‘famous philosopher’ merely expresses a demand that democratic Europe send brigades of guerrilla fighters and better ordnance to Gaza, in order to assist Hamas terrorists in bombing Israeli civilian populations And why not, when, as yet another famous philosopher, Judith Butler (also one of Vattimo’s authors, recall) long ago instructed (and why didn’t more take her seriously at the time?) we ought to understand ‘Hamas [and] Hezbollah as social movements that are progressive, that are on the left, that are part of a global left.’ Lest one miss the point – she means it, as he does – Butler underlines, for good measure: ‘this is very important’ (see Alan Johnson, ‘Europe’s Left in Crisis’).

And indeed, it is. It is very important indeed to recognise something else – and that’s the second thing revealed by Gianni Vattimo, et al, in light of the current crisis in Gaza/Israel: Philosophy as a discipline has lost its mind.

Come to think of it, a third thing is revealed, too: The large audience for such authors has lost its mind.

By David Hirsh
In the first half of the 20th century, most Jews failed to find their way... Read more > Spring 2014