Fathom > Summer 2015 > Fathom eBook | Two States for Two Peoples – 20 Years after Oslo II: How to renew the peace process between Israel and the Palestinians

Fathom eBook | Two States for Two Peoples – 20 Years after Oslo II: How to renew the peace process between Israel and the Palestinians 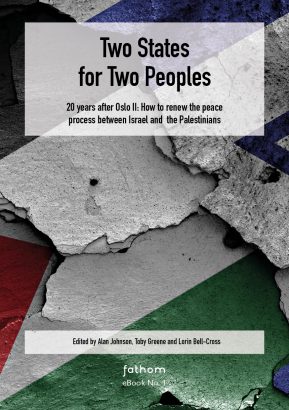 To mark the 20th anniversary of the Oslo II agreement, Fathom has published an eBook – Two States for Two Peoples – a collection of  essays and interviews drawn from the pages of Fathom focused on the two-state solution and how to reinvigorate it.

When Israeli Prime Minister Yitzhak Rabin and PLO Chairman Yasser Arafat signed the ‘Interim Agreement’ at the White House on 28 September 1995, it was the high point of the Oslo Process. Two years after the initial Oslo Agreement, Oslo II was a key milestone, empowering the Palestinian Authority to govern all the large Palestinian population centres in the West Bank, and creating the division of powers according to Areas A, B and C that exists to this day.

The basic ingredients of the conflict remain the same now as they were 20 years ago: two entirely distinct national groups, both with legitimate claims to national self-determination in the same piece of land. The question we must ask ourselves now is, “Where does the peace process stand 20 years after Oslo II, and what must be done to keep it alive?”

The essays in this eBook offer thinking about the conflict orientated to understanding its complexity and how it can be resolved within a framework of recognition of rights on both sides. They reflect the following principles.