by Meir Kraus
BACK 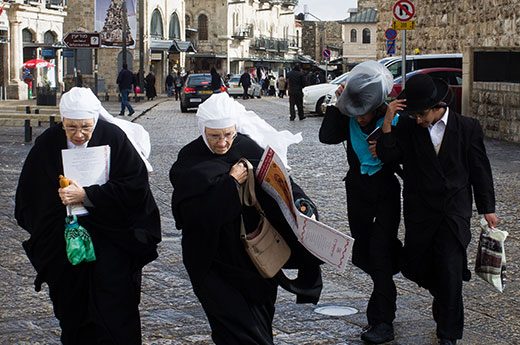 Two Christian nuns and two Jewish Orthodox men lean forward against the wind and rain as they exit the Old City through the Jaffa Gate, Jerusalem 2012. Nir Alon / Demotix / PA.

The Arab League decision to create a $1bn fund to ‘maintain the Arab and Islamic character’ of Jerusalem exemplifies the way all sides compete to shape the city according to their own agenda. Meir Kraus argues for a radically different vision.

To see Jerusalem only through the prism of the Israeli-Palestinian conflict ignores the present-day needs and desires of those who live the city on a daily basis, and prevents us from realising its potential to become a flourishing world centre by virtue of its extraordinary historical and spiritual legacy. Modern Jerusalem is only 160 years old and is home to some 800,000 people; 500,000 are Jewish, the remainder are Palestinian and almost half the population lives below the poverty line. These are the ones who suffer most from the city’s inability to capitalise on its strategic assets and become a world centre.

The on-going Israeli-Palestinian conflict harms the ability of Jerusalem’s administrators to plan for the future. The result is that Israelis and Palestinians, Jews of varying denominations, Muslims and Christians, are in competition for power and control over Jerusalem’s physical, social, spiritual and symbolic identity. This competition can be seen in the battle over planning and building, over investments, and in the struggle to mould the city’s character. Most of all there is a struggle of narratives, with each party trying to strengthen the case for its own historic tie to the city whilst denying that of others.

The Jerusalem municipality and other bodies do make a concerted effort to plan for tomorrow, even in the absence of a peace agreement. Advances in higher education, burgeoning local biotech, new media industries, and a drive to turn the city centre into a modern cultural hub are each important, but they do not come close to exploiting Jerusalem’s full potential.

Historical Jerusalem offers 3,000 years of culture; Jebusites, Israelites, Hellenists, Romans, Jews, Christians, Muslims,
Crusaders and Palestinians have all left their mark. ‘Heavenly Jerusalem’ is a source of profound inspiration for hundreds of millions of people across the globe, making the city a universal centre of spirituality unlike anywhere else in the world.

To stroll through Jerusalem’s streets is to be immersed in many cultures. There are synagogues, mosques and churches offering distinctive ideals, alongside myriad places of learning and enlightenment. Diverse communities from abroad, whether sovereign states or international organisations, have a presence through their envoys.

To see the city as a mosaic of the world’s identities, each with a stake in the city, just look at the map of land and property ownership or, better still, drill down into the history of particular buildings. Take, for example, the downtown Sergei Building, constructed in 1890 for Russian pilgrims, used by the British for public administration during the Mandate period, then, from Israel’s independence in 1948 until 2011, to house the Agriculture Ministry, only to be reclaimed by the Russian government recently.

Diversity should not be Jerusalem’s weakness but its source of strength, regarded as the city’s ‘infrastructure’ and the key to its prosperity. Strengthening and deepening Jerusalem as a universal centre of spirituality, valuing the unique emotional attraction Jerusalem has for so much of the world, could position the city as a place where people want to visit, build, invest and be inspired. While concrete thinking will be required to translate this vision of the city into practice, what matters for now is getting the broad principles right: partnership, dialogue and creative thinking.

First, it is imperative that all those who care about the city stop the competition to define Jerusalem as essentially Jewish or Muslim or Christian, and instead become partners in building the city’s future.

Second, it is vital to open a dialogue on this unique treasure even in the absence of a peace agreement, and before the on-going conflict further harms the city. If the State of Israel was to invite all stakeholders to the table to talk about Jerusalem, and they would embrace the opportunity, all sides would benefit. By creating a dialogue about the city that is framed in terms of universal collaboration we may generate new and creative ways of looking at the formal arrangements that can later be embodied in a political agreement. At the Jerusalem Institute for Israel Studies we explored possible scenarios for Jerusalem and found that progress might be made if we disconnect issues of sovereignty and management, at least for the Old City area, known as the holy basin.

Sovereignty is a concept created to define arrangements between people, between the countries they represent and their legal systems. Where Jerusalem is concerned, the zero-sum competition over sovereignty, reflecting national aspirations, may be to the detriment of the city’s ability to exploit its unique potential for the benefit of all its inhabitants, so we should try to be unfettered by overly formal and standardised terminology. Let us instead reflect on those biblical prophets who envisaged Jerusalem as belonging to all people. Isaiah said: ‘And it shall come to pass in the last days, that the mountain of the Lord’s house shall be established at the top of the mountains, and shall be exalted above the hills; and all nations shall flow unto it.’

Are we ready to change our conceptual thinking? Are we willing to think of Jerusalem as a universal centre of spirituality rather than fighting over control? Whatever we choose, Jerusalem will bear the consequences.

By Liam Hoare
Israel, as Amos Oz once observed, was born out of a spectrum of dreams and... Read more > Summer 2013

By Israel Bartal
Shlomo Sand’s political treatise, The Invention of the Land of Israel, is another link in... Read more > Summer 2013

By Eric Trager
In the decade following the 9/11 terrorist attacks, Western analysts’ search for a ‘moderate Islamist’... Read more > Summer 2013