Book Review: The Muslim Brotherhood: From Opposition to Power

by Eric Trager
BACK 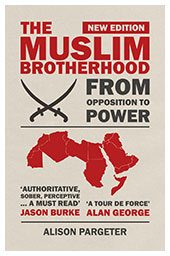 Assuming the Muslim Brotherhood is ‘democratic’ and ‘non-violent’ has left the international community unprepared for the very undemocratic and violent reality. Alison Pargeter is not so deluded.

In the decade following the 9/11 terrorist attacks, Western analysts’ search for a ‘moderate Islamist’ alternative to Al-Qaeda often brought them to the Muslim Brotherhood, whose rhetorical rejection of terrorism and embrace of electoral politics was seductive. Much of the resulting literature thus touted the Brotherhood’s supposedly ‘democratic’ and ‘non-violent’ nature, all of which left the international community wholly unprepared for the very undemocratic and violent reality now emerging in Brotherhood-ruled Egypt.

Thankfully, however, not all analysts were so deluded. In her excellent book, The Muslim Brotherhood: From Opposition to Power, Alison Pargeter offers a much-needed dose of realism, weighing the Brotherhood’s lofty assertions against its aggressive actions. Through her examination of the Brotherhood’s early history in Egypt and subsequent spread throughout the Middle East and Europe, Pargeter depicts an organisation that faces the constant dilemma of either widening its base through pragmatic outreach or solidifying its base through a more hardline approach. And, as Pargeter tells it, the Brotherhood has almost always embraced the latter, favouring its ‘conservative’ tendencies over its more ‘reformist’ ones.

This dilemma dates back to the early decades of the Brotherhood’s existence. According to Pargeter, founding Supreme Guide Hassan al-Banna, who established the Brotherhood in 1928, ‘struggled to strike a balance between engaging with [Egypt’s] establishment and appeasing his followers.’ In this vein, al-Banna’s various concessions to the authorities, such as his reluctant support for the 1936 Anglo-Egyptian Treaty that legitimised Britain’s presence in Egypt, greatly upset the Brotherhood’s most ardent members. So to keep them in the fold, al-Banna permitted the establishment of an internal paramilitary organisation known as the ‘secret apparatus,’ which represented the organisation’s commitment to jihad and participated in various acts of political violence. This decision, Pargeter correctly notes, challenges the common view of al-Banna as a ‘beacon of moderation,’ since ‘he was always willing to accommodate the more militant elements within his movement.’ It was also a fatal mistake: two months after a young Muslim Brother gunned down Prime Minister Mahmoud Nuqrashi, al-Banna was himself assassinated, in February 1949.

The story of Brotherhood radicals triumphing over reformists repeats itself constantly in Pargeter’s narrative, albeit in different forms. For example, in the 1950s, members of the ‘secret apparatus’ successfully thwarted second Supreme Guide Hassan al-Hodeibi’s attempt to dissolve the paramilitary unit. Its confrontational posture against the emerging Nasser regime, that ran counter to al-Hodeibi’s more conciliatory instincts, ultimately catalysed a broad crackdown in which many of the organisation’s top leaders were either jailed or exiled.

In the 1990s, hardline Brotherhood leaders, including many veterans of the ‘secret apparatus,’ resisted younger members’ calls for greater engagement with non-Islamists and more transparent internal election procedures. When these younger members ultimately responded by forming their own political party called al-Wasat, the Brotherhood banished them. Later, when Brotherhood reformists rejected a 2007 draft ‘platform’ that prohibited women and Copts from running for president, among other controversial provisions, the Brotherhood’s hardliners responded by removing one of the organisation’s foremost reformists from the Guidance Office and stacking its leadership with so-called ‘Qutbists’.

That is not to say that the radicals always prevailed. During the 1980s, Supreme Guide Omar al-Tilmisani acceded to reformists’ demand for participation in parliamentary elections, and the Brotherhood broke character by aligning with non-Islamist parties during the 1984 and 1987 races. However, as Pargeter notes, this period coincided with a Mubarak regime crackdown that sent many of the Brotherhood’s hardliners into exile. When these figures returned in the early 1990s, the Brotherhood quickly reverted to form.

While Pargeter accurately captures the ongoing struggle between the Brotherhood’s two competing impulses, the distinction between ‘reformist’ and ‘conservative’ is, in fact, more blurry than her narrative acknowledges. For example, while she describes former Supreme Guide Mehdi Akef as ‘more sympathetic to the reformist wing’ and current deputy supreme guide Mahmoud Izzat as a ‘senior traditionalist,’ the latter is the former’s son-in-law. Similarly, although Pargeter frequently describes current Brotherhood political leader Issam al-Ariyan as a ‘reformist’, she fails to reconcile this descriptor with al-Ariyan’s persistent rise within the organisation, despite the dominance of ‘conservatives’ in the Brotherhood’s leadership.

For the most part, these distinctions are blurry because, at their core, ‘reformists’ and ‘conservatives’ differ only in tactics. Indeed, in Pargeter’s narrative, the ‘reformists’ seek immediate political participation and desire engagement with non-Islamists to broaden their appeal; ‘conservatives,’ by contrast, fear that this approach will water down the Brotherhood’s Islamist authenticity and thus undermine organisational integrity. Yet both trends ultimately subscribe to the same ideological vision: they seek to Islamise society as a first step towards establishing an Islamic state, and ultimately creating a ‘global Islamic state,’ in the words of deputy supreme guide Khairat al-Shater. This is why even those young ‘reformists’ whom Brotherhood hardliners banished in 1996 for forming al-Wasat are now the Brotherhood’s closest parliamentary partners. The two groups merely disagreed on when the Brotherhood should form its own party, not on what that party’s goals should be.

And yet despite its eighty-five year existence, the Brotherhood’s ideology remains remarkably vague. As Pargeter correctly notes, the Brotherhood has produced only one ‘true scholar’ – the radical theorist Sayyid Qutb – while its supreme guides, al-Banna included, left a rather thin literary record. For the most part, this has been a tactical decision: ‘the absence of detail is a deliberate means of protecting the Brotherhood from factionalism,’ writes Pargeter.

Still, whenever circumstances have forced the Brotherhood to articulate specific positions, the Brotherhood has typically embraced extremes. As Pargeter observes, the Brotherhood has supported suicide bombings against Americans in Iraq and against Israelis, believes that religious law should precede individual freedoms, and promotes intolerance towards non-Muslims as well as Shiites. In other words, the Brotherhood’s ideological content, insofar as it exists, is a series of rabble-rousing reflexes, not an intellectual framework through which its stated goal of ‘implementing the sharia’ has ever been considered, let alone fleshed out.

To be sure, these reflexes allowed the Brotherhood to ‘posit itself as the authentic voice that can bring Islam to the core of every aspect of life,’ as Pargeter writes, and therefore win post-revolutionary elections in both Tunisia and Egypt. However, reflexes do not constitute a governing philosophy, much as the ability to win elections hardly implies the competence to rule. Meanwhile, the Brotherhood’s ultimately ‘conservative’ impulses remain unchanged: rather than embracing ‘reformist’ outreach, it has continued to prioritise the organisational prerogative of power consolidation. And, as much as this ‘conservative’ tendency has long catalysed dissent within the Brotherhood’s own ranks, it is now angering a broader society that is increasingly in rebellion against its reign.

By Benedetta Berti
Relations between Egypt and Hamas have improved under Morsi. But he has issued no blank... Read more > Summer 2013

By Alan Mendoza
One of the leading neoconservative intellectuals of the last half century, Richard Perle was Assistant... Read more > Summer 2013 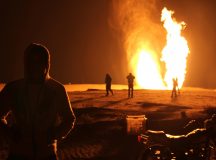 By Asher Susser
Israel used to fear the potential of Arab power. Now it must be wary of... Read more > Summer 2013

By Matthew Levitt
The radical Shiite Lebanese organisation Hezbollah may be best known for its armed activities, but... Read more > Summer 2013