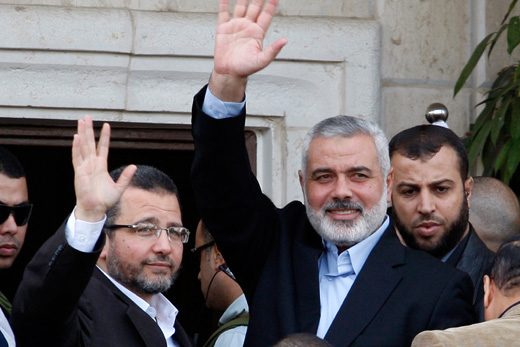 Relations between Egypt and Hamas have improved under Morsi. But he has issued no blank cheque and continuity is as evident as change.

The massive turmoil in the Middle East since the beginning of the so-called Arab Spring has forced Hamas to make significant strategic changes in order to adapt to the new security and political environment. One of the most important effects on Hamas has been the group’s realignment away from Syria towards Egypt. With the rise of the Muslim Brotherhood, Egyptian backing for Hamas has increased, strengthening the group’s legitimacy, domestically, in the context of the Arab-Israeli conflict, and regionally. However, the relationship between the two actors is more complex than meets the eye.

The strengthening of the bilateral relations between Egypt and Hamas has to be understood in the context of Hamas’ strategy with respect to the Arab Spring. The organisation has striven to adapt to the new political environment by aligning itself with the regional discourse of dissent and protest, by deflecting domestic opposition, and by redefining its regional alliances.

Hamas endorsed the early anti-government demonstrations in both Tunisia and Egypt, while emphasising the ideological continuity between its own struggle and that of the protesters. While supporting political opposition in the region, Hamas also focused on diffusing criticism at home. The May 2011 ‘unity deal’ announced between Hamas and Fatah was an attempt by both groups to minimise the chances of internal dissent within Gaza and the West Bank by responding to the public pressure for reconciliation. However, Hamas’ most important adaptation mechanism to cope with the Arab Spring has certainly been the group’s regional realignment.

Hamas has gradually drifted away from the Assad regime in Syria, its historical ally and host of the organisation’s political bureau. Caught between the warring parties, Hamas initially attempted to preserve its neutrality. But as the brutality of the Syrian government escalated, Hamas gradually and quietly began to distance itself from the regime, eventually relocating its political bureau away from Damascus. Since then, Hamas has become more vocal in its support for the Syrian opposition and its physical relocation away from Damascus has resulted in a weakening of its ties with Syria and, to a lesser extent, Iran. In parallel, the group has been strengthening its relations with countries like Egypt and Qatar.

The rapprochement with Egypt would certainly not have been possible without the demise of the Mubarak regime and the rise to power of the Muslim Brotherhood, which Hamas greeted with enthusiasm. Specifically, Hamas – itself born as the armed wing of the Gaza branch of the Muslim Brotherhood – likely hoped that the rise of political Islam in Egypt would lead to a deterioration in the bilateral relations with Israel; the strengthening of Hamas’ standing and legitimacy; greater support for the group’s ‘resistance’; and the opening of the border between Gaza and Egypt. A year on from Egypt’s parliamentary election, and more than six months on from the Presidential election, it is fair to assert that not all of Hamas’ expectations have been met.

Certainly from Hamas’ point of view, Morsi is an improvement from the Mubarak era. Egyptian-Israeli relations have certainly deteriorated, even if the peace agreement itself is not under discussion and Israeli-Egyptian security coordination has continued.

In addition, the new Egyptian political authorities have definitely reversed the previous ‘pro-Fatah bias’ of the Mubarak era, strengthening the standing of Hamas. In the period following his election, President Morsi met with both Hamas politburo leader Khaled Meshaal and Prime Minister Ismail Haniyeh, welcoming a ‘new era’ in the relationship between the two parties.

The frail state of Israeli-Egyptian relations and the strengthened ties with Hamas played a key role in shaping Egypt’s reaction to the round of hostilities between Hamas and Israel in November 2012. President Morsi’s response – which involved recalling the Egyptian Ambassador to Israel as well labelling the military operation an ‘unacceptable aggression’ – showed that Egypt had moved away from Mubarak’s ‘permissive’ attitude displayed during operation Cast Lead. Morsi also dispatched his prime minister, Hesham Kandil, to Gaza – a highly symbolic gesture.

Yet, Morsi’s condemnation of Israel’s military operation did not lead him to urge Hamas to continue its attacks. On the contrary, Egypt immediately assumed a leading role in attempting to broker a ceasefire, earning Morsi international recognition and legitimacy. This is a key illustration of Morsi’s foreign policy:a careful balance between ideology and pragmatism, whilst avoiding steps that would openly flout the international community’s ‘red lines’. Indeed, an increase in Egypt’s support for Hamas’ ‘resistance’ has by and large not materialised. Egypt has showed an interest in avoiding direct involvement in a confrontation with Israel, valuing both internal stability as well as the economic aid it receives from the US. As such, Egypt’s Muslim Brotherhood has not pushed Hamas towards further military confrontation, and has expressed agreement with the possibility of a two-state solution.

Finally, Egypt’s record has been mixed when it comes to one of Hamas’ most important demands: the relaxing of its grip on Gaza. In the months following the collapse of the Mubarak regime, Egypt continued, despite its rhetoric, to restrict movements across its border with Gaza. After his election, Morsi made clear that he intended to take concrete steps to change the situation and in July 2012 met with Haniyeh to discuss concrete measures, like opening the Rafah crossing 12 hours a day. However, the normalisation of the Egypt and Gaza border has proceeded at a glacial pace, partly due to significant security concerns, including the proliferation of weapons to and from Gaza, the problem of monitoring the underground tunnels and the impact of these issues on Sinai – Egypt’s security hotspot.

Less than two weeks after the Morsi-Haniyeh meeting, Sinai was yet again the target of a terrorist attack, when on 5 August 2012 a group of militants, some reportedly from Gaza, attacked an Egyptian security outpost near the border with Israel. Sixteen Egyptian soldiers were killed and the hijackers subsequently attempted to force their way into Israel in the stolen Egyptian military vehicles. The attack generated a huge pressure within Egypt to deal with the security vacuum in the Sinai, leading the government to immediately close the border with Gaza and to put pressure on Hamas to boost its border security and close the underground tunnels used for smuggling between Gaza and Sinai. Despite denying any connection between the attack and Gaza, Hamas complied, declaring its willingness to coordinate its security with Egypt. Despite these assurances, the terrorist attack in Sinai revealed a potential source of friction between Hamas and Egypt. While both parties share an interest in cracking down on Salafi-jihadist activism on both sides of the border, Hamas has an economic interest in keeping the underground tunnels open. Egypt, on the other hand, would rather see them closed, as they are difficult to monitor and complicate the already daunting task of securing the Sinai.

In the months following November’s hostilities between Hamas and Israel, the issue of the normalisation of the Egypt-Gaza border has remained high on the agenda. However, since the end of Operation Pillar of Defence the process has been carried out in the broader context of the ceasefire between Hamas and Israel. As part of the agreement that ended hostilities, Israel committed to indirect talks with Hamas on the Gaza border crossings. These talks are taking place under Egyptian mediation, confirming the crucial role the country has come to play in brokering relations between Hamas and Israel. Egypt’s handling of the talks also shows that it remains interested in getting Israel to relax its border restrictions, whilst not allowing itself to become the main access point for Gaza or becoming responsible for the territory’s overall welfare. Brothers they may be, but Egypt remains wary of its neighbour.

By Eric Trager
In the decade following the 9/11 terrorist attacks, Western analysts’ search for a ‘moderate Islamist’... Read more > Spring 2013