by Emily B. Landau
BACK 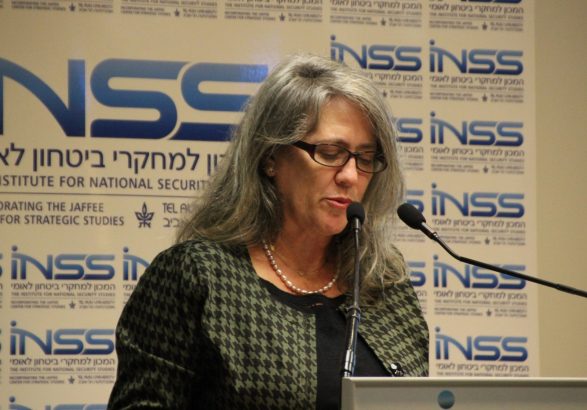 Toby Greene: We’ve been speaking to a range of experts about how to bring a substantial long-term change to the status quo with the Gaza Strip, linking reconstruction in the Gaza Strip to demilitarisation of the armed groups there. We’ve been using as a starting point a paper on this theme by your colleagues at the Institute for National Security Studies (INSS) in Tel Aviv, Udi Dekel and Shlomo Brom. So to begin with, what is your general response to this approach?

Emily Landau: I think Udi Dekel and Shlomo Brom took the debate that was emerging in Israel on this topic as a hook to formulate their piece. There has been a broader debate on that issue in Israel from maybe the second week of Operation Protective Edge. It’s an idea that has been circulating and they gave a formulation to it, locking in to a wider debate.

It sounds good to say ‘reconstruction for demilitarisation’ but we have to be very clear about the fact that this is an unequal equation. If I can comment on the specific article, I think it reflects this problem. There’s a lot more analysis of the ‘reconstruction’ part than of the ‘demilitarisation’ part for this very reason: they say that the conditions are ‘right for Israel to impose demilitarisation in principle, even if implementation proves limited.’ They say it should be backed by a UN Security Council resolution; they say Egypt have to will have a role; they propose an international expert monitoring mechanism with Arab League guarantees. But the question is what these things mean, and what kind of teeth they will have?

An international expert monitoring mechanism with Arab League guarantees sounds good in theory but how do you break that down into specific mechanisms that have a chance of actually being able to achieve the goal of demilitarisation? So that would be my general comment on it. The interests of all parties in the two sides of the equation are not the same.

TG: At the early stages of the conflict, there were some comparisons or suggestions drawn to the disarming of Syria’s chemical weapons in the context of the civil war in Syria. But from what you’re suggesting the Gaza Strip does not present that kind of an opportunity. What are the kind of practical differences and difficulties involved?

EL: Generally speaking we can think about what different models, for demilitarisation or for disarmament, what has worked, what hasn’t worked and why.

I would even start with an older example of demilitarisation. Take the example of Sinai and the agreements after the Yom Kippur War between Israel and Egypt for the demilitarisation of Sinai. This model worked because both Israel and Egypt had a very strong interest – especially after the Yom Kippur War – in coming to these confidence-building agreements. They both had an interest in lowering the prospects of another war breaking out between them; after the Yom Kippur War they both developed an interest in moving the direction of what ultimately became the peace agreement between them. But it happened because the Yom Kippur War drove home to both sides that war was not a good option for either side to get what they want from the other, and the most important message was to Egypt. It realised that it could not achieve its objectives through fighting, and therefore had an interest to move in a different direction with Israel. So the demilitarisation of Sinai was one step on the way to creating a basis for a peace agreement, there was a mutual interest there, and it worked.

If we take the model of just the UN Security Council resolution, we have the example of Lebanon after the Second Lebanon War (2006) and Resolution 1701 with regard to all the rockets and missiles in the hands of Hezbollah. That model has proven to be an utter failure, with Hezbollah having many times more missiles and rockets than they did even on the eve of the Second Lebanon War. So a UN Security resolution is not going to work.

The ‘Syrian model’ that you mentioned was raised by many. But again, this is a problematic model for two reasons. First of all, it related to an existing treaty: the Chemical Weapons Convention (CWC). In other words, the norm was already there, and the objective was just to get Syria to adhere to that norm. Why is that important? Because the CWC has the mechanisms for ensuring the disarmament with regard to chemical weapons; the Organisation for the Prohibition of Chemical Weapons (OPCW), has experience with many states, disarming them, they had teams of inspectors that come in and do the work.

The second element that’s missing in Gaza is the presence of a strong power (or powers) which got a message across to Assad that he’d better make the decision to join the CWC; otherwise his continued power might be in real danger. How did that come about? It was the US threat to use military force, which some, especially here in Israel, didn’t view as necessarily a very strong threat. However, it was enough of a threat to at least have convinced Putin that there was a chance military force would be used; I think Putin took Assad aside for a very focused conversation, explaining to him that there is a chance that the Obama administration might actually use military force and that this could have all kinds of consequences for Syria and Assad might lose his seat in power. All those factors came together to create the ‘Syrian model’.

What will be needed for Gaza to achieve the goal of demilitarisation will have to be something new. It will have to take into account the fact that Hamas has absolutely no interest in demilitarisation – their total rejection of this notion – therefore pressure will be a crucial element in any kind of plan or model for demilitarisation. There’s military pressure and there’s political pressure. Israel has already used military pressure throughout Operation Protective Edge, but there’s going to have to be real pressure from regional – and more importantly international actors – to get the message across to Hamas that not adhering to this will put Hamas’s continued role in Gaza in danger. I’m afraid that absent that kind of message to Hamas, the different plans for demilitarisation are not going to work. State interests in upholding arms control and disarmament agreements are crucial. If the state or the entity does not have an interest in upholding an arms control agreement, that agreement will be in danger.

TG: Given that the local regional and global challenges, what do you think is the best possible outcome from the current round of hostilities?

EL: The best outcome is that kind of a deal.

Israel has an interest in the situation in Gaza improving. A plan for reconstruction – if it was purely civilian and really directed to improving the lives of the Palestinian citizens, rather than all these plans that are abused by Hamas for their own ends – would be the best possible outcome together with demilitarisation. Ensuring not only that Hamas is demilitarised, but that you stop all of the elements that might be helping Iran to rebuild their military power.

This equation – if it could be achieved – is probably the best equation that we have for Gaza right now. But I think it’s going to have to go through some kind of mechanism that gets a message across to Hamas that if it doesn’t move in the direction of demilitarisation then its continued role in Gaza is in real danger. Without that message, we’re not going to get the necessary Hamas interest in demilitarisation and any plan that is devised; any international expert monitoring mechanism with Arab League guarantees is not going to work. It won’t be worth the paper that it’s written on if the clear message to Hamas is not delivered.