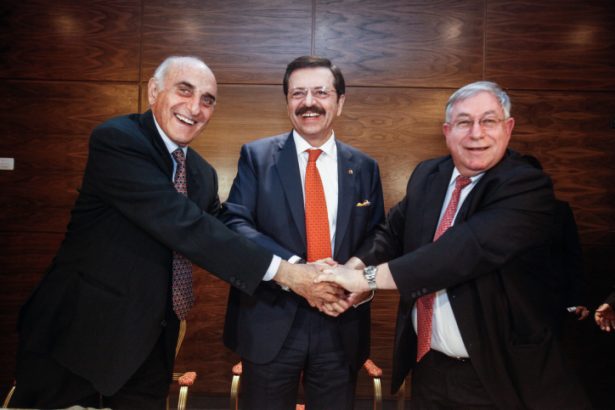 Rifat Hisarcıklıoğlu (C) Oren Shachor (R) and Munib al-Masri at a ceremony for a new institution for commercial arbitration between Israel and the Palestinian Authority in Turkish mediation. Jerusalem, March 24, 2013. FLASH90.

According to the Portland Trust, the respected non-for-profit British foundation committed to encouraging peace and stability between Palestinians and Israelis through economic development, ‘the overarching economic lesson from Bosnia and Herzegovina is that the structure of the political settlement controls the nature of the post-conflict economy.’ The Trust points out that it is vital the political solution ‘is structured in a way that encourages optimal economic development’ because ‘a strong post-conflict economy is essential for keeping the peace’. Conversely, ‘economic disparities and poor financial prospects endanger a fragile peace accord’. Economic divisions between the Republic Srpska and the Federation of Bosnia Herzegovina, the Trust notes, have stifled economic growth and entrenched ethnic divisions.[1] The lesson for Israel-Palestine is plain: severing economic ties risks perpetuating political conflict.

BDS will only worsen the economic disparities between Israelis and Palestinians that have the potential to endanger a peaceful settlement. The Palestinian economy suffers from a number of structural weaknesses in addition to the considerable economic impediments created by the occupation. These include the weakness of the law and court system, susceptibility to undue political influence, low productivity, low foreign direct investment, weak competitiveness (though this is inextricably linked to the heavy Israeli security apparatus) and dependence on foreign aid.[2]

In the pre-Second Intifada years (1998-September 2000), there were 150,000 – 200,000 Palestinians working in Israel and the settlements, constituting approximately 20 per cent of total Palestinian employment.[3] The monthly salaries of these people averaged NIS 4000-5000.[4] Jobs in in the Palestinian territories, on the other hand, typically paid NIS 1500 per month.[5] The surge in unemployment, from 10-15 per cent in the pre-intifada years to 20-25 per cent in the post-intifada years (2005 onwards), stems largely from the sharp decline in Palestinian employment in Israel.[6] Indeed, the value of the gap created by the decline in Palestinian labour exports and remittances amounted to $500 million per year or 13 per cent of Palestinian GDP in 2005–2006.[7] At present, work in Israel still contributes more than one quarter of all wage income in the West Bank.[8] Moreover, ‘it should be noted that if not for the work in Israel, the unemployment rate in the West Bank would have been as high as in Gaza: 30-35 per cent.’[9] In short, Palestinian labour in Israel is crucial to the sustenance of the Palestinian economy.

Palestinians need a multifaceted economic strategy and the academic consensus is that export-driven growth is essential for job creation. However, the AIX Group — a France-based partnership of Israeli, Palestinian, and international economists –  has pointed out that ‘even if internal restrictions are removed and the border regime between Israel and the Occupied Palestinian Territories is improved, a 20 per cent hike in exports cannot offset the economic gap left by continuing restrictions on Palestinian labour in Israel.’[10] This finding clarifies that an immediate end to the occupation would not quickly remedy the under-development of the Palestinian economy. Improving the labour flow into Israel will be necessary in the short to medium term to alleviate Palestinian economic difficulties. Current demographic trends in the Palestinian territories (the working-age population is currently growing at a rate of 100,000 per annum) are also expected to place increasing pressure on the Palestinian labour market.[11] According to estimates based on the 2010 Palestinian Labour Force Survey, the Palestinian economy needs to more than double the number of available jobs this decade to merely maintain an unemployment rate of 30 per cent.[12] This further demonstrates why easing Palestinian access to the Israeli labour market is so important. Positively, the number of Palestinians with work permits in Israel has started to recover from the post-intifada slump.[13]

When the BDS movement opposes all economic ties between Israel and the Palestinians as a ‘normalisation’ of the conflict, it does not even represent the views of the Palestinian people. According to a poll commissioned by the Washington Institute for Near East Policy, 72.9 per cent of Gazans answered ‘definitely yes’ or ‘probably yes’ to the question ‘Would you like to see Israel allow more Palestinians to work inside Israel?’[14]

While Israeli settlement construction in the West Bank should be opposed because it obstructs a two-state solution, boycotts of settlement products would only damage the Palestinian economy, exacerbating the peace-threatening economic disparities. The settlements are the biggest employer of Palestinians in the territories, providing work for some 25,000 Palestinians who, on average, earn over twice as much those employed in the Palestinian Authority.[15] Officially, these Palestinians get the same employment benefits as Israeli workers. Settlement boycotts will impact their families (100,000-200,000 people) and force the withdrawal of Israeli investment from the territory. Boycotts also have the potential to fracture successful Israeli-Palestinian partnerships. Examples of this include co-operation in agriculture in the Jordan Valley[16] and Israeli investment in Palestinian technology firms near Ramallah.[17] Economic unity that builds trust and prosperity across the Green Line can only be constructive. A boycott will also place immense pressure on the Palestinian Authority to find new jobs for the newly unemployed at a time when it is trying to reduce the public sector wage bill.[18] The strain on local social services would also be significant and– given the correlation between economic distress and the rise of political extremism – that risks endangering peace efforts. Hamas is known to have gained popularity amongst Palestinians for its extensive social welfare provision. Damaging an already fragile and volatile Palestinian economic situation via BDS risks making such anti-peace organisations more attractive.

Liberalising the Gazan import and export regime is fundamental to enhancing Palestinian socio-economic welfare. Moreover, re-establishing trading routes between the Palestinian territories as well as easing the constraints on the employment of Gazans in Israel are possibilities that merit urgent attention. Such moves to boost Palestinian trade would also develop Palestinian economic independence. The construction of a sea port and airport in Gaza, under international trusteeship, could be adopted on a similar platform. Implementing an international taskforce to prevent an influx of weaponry perhaps offers the best way of addressing Israeli security concerns.

Reviving and developing the Paris Protocol – the framework for economic relations between Israel and the Palestinian Authority signed in April 1994 – offers a mechanism to boost economic co-operation, develop financial and physical infrastructure in Palestine, increase trade, improve training and incentivise entrepreneurship. Boycotts and divestment, however, will contribute nothing to the development of Palestinian economic sovereignty. Calling for Israel’s economic strangulation will not only inevitably harm Palestinian economic interests but will also undermine the process of economic development necessary to secure an enduring peace. Ironically, it is the advancement of economic ties promoting peaceful co-existence, not BDS, which will make the termination of the military occupation more likely.

[3] The AIX Group (2013). Twenty Years after Oslo and the Paris Protocol. Changing Course, Averting Crisis – From Dependency to Economic Sovereignty: Proposed Modifications to the Protocol on Economic Relations between Israel, Aix Group publication.

[7] M. Eljafari, M. Boughzala, and M. Kouni, (2012). Determinants and Impacts of Migration and Remittances: The Case of Palestine and Tunisia, Femise Research Programme

[17] Richard. Behar (2013). Peace Through Profits? Inside The Secret Tech Ventures That Are Reshaping The Israeli-Arab-Palestinian World. Forbes   Magazine, 12 August.

By Alex Brummer
From reforming the banks to the crisis in the Eurozone, from increasing Haredi employment to... Read more > Autumn 2014

By Liam Byrne
We are entering a new urban age, so let’s build world class partnerships between the... Read more > Autumn 2014

By Hitham Kayali
The one-state solution is a mirage. Only the two state solution can meet the national... Read more > Autumn 2014

By Joshua Muravchik
'Israel Apartheid Week’ is looming on campuses worldwide. In fact,  as this edited extract from... Read more > Autumn 2014