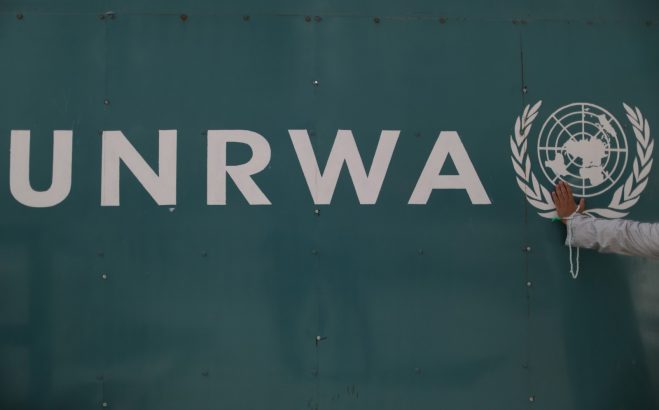 A Palestinian man waits outside of the UN headquarters building in Gaza City on 6 April 2013. Wissam Nassar / FLASH90.

For the sake of peace, reform of the United Nations Relief and Works Agency (UNRWA) is urgently needed, argues Einat Wilf.

One of the greatest obstacles to peace, and certainly the least acknowledged, is the perpetuation of the Palestinian refugee problem and the inflation of its scale by the United Nations Relief and Works Agency (UNRWA). Whereas the actual number of Arabs who could still claim to be refugees as a result of the Arab-Israeli war of 1947-1949 is today no more than several tens of thousands, the number of those registered as refugees is reaching 5 million, with millions more claiming to have that status.

Since the Second World War the UN High Commissioner for Refugees has been responsible for the welfare of all refugees in the world and has assisted in their resettlement and relocation – so that nearly all of them are no longer refugees – with one exception: the Arabs from Palestine. By contrast, UNRWA, the organisation created specifically to handle the Arab refugees from Palestine from the 1947-1949 Arab-Israel war, has collaborated with the Arab refusal to resettle the refugees in the areas where they reside, or to relocate them to third countries. Worse, UNRWA has ensured that the refugee issue only grows larger by automatically registering descendants of the original refugees from the war as refugees themselves in perpetuity, For Palestinians, uniquely, refugeeness is an hereditary trait.

For several decades UNRWA has been engaging in an act of bureaucratic self-aggrandisement, inflating the numbers of those in its care, ensuring the growth of its budget. If the descendants of the Arab refugees from the Arab-Israeli war were treated like all other refugees, including the Jewish ones, they would not quality for refugee status because almost all of them (upward of 80 per cent) are either citizens of a third country, such as Jordan, or they live in the places where they were born and expect to have a future such as Gaza and the West Bank. The Palestinians born in the West Bank and Gaza are not fleeing war and are not seeking refuge. They are considered citizens of Palestine by the Palestinian Authority itself, just like all other Palestinians born in these territories. No other people in the world are registered as refugees while being citizens of another country or territory. Moreover, if the European Union has adopted the policy that Gaza and the West Bank are territories to be allocated to Palestine – and some EU countries already recognise Palestine as a state – then it makes no sense for it to argue that people who were born and are living in Palestine are refugees from… Palestine.

The remaining 20 per cent of the descendants who are not Jordanian citizens or citizens of the Palestinian Authority in Gaza and the West Bank, are inhabitants of Syria and Lebanon who are by law denied the right to citizenship granted to all other Syrians and Lebanese. Yet, UNRWA does nothing to fight for the right of these Lebanese and Syrian-born Arabs to citizenship, collaborating in their discrimination and the perpetuation of their refugee status.

Why does this matter for peace? Because if millions of Arabs who are citizens of Jordan and the Palestinian Authority, or inhabitants of Syria and Lebanon, claim to be refugees from what is today Israel, even though they were never born there and never lived there, and demand that as a result of this refugee status they be given the right to relocate to Israel (‘the right of return’), then the whole basis for peace by means of two states for two people crumbles. If Israel with its 6 million Jews and more than 1.5 million Arabs has to absorb between 5 and 8 million Palestinians then the Jews will be relegated again to living as a minority among those who do not view them as equals; the only country in which the Jews are a majority and can exercise their right to self-determination would be no more.

Even more absurd is that UNRWA is funded by countries who support two states for two peoples. The United States, the EU, Canada, Japan and Australia fund 99 per cent of UNRWA’s annual budget of over $1 billion, whereas the 56 Islamic countries who supposedly grieve for their Palestinian brethren supply only a few million dollars.

If the policy of Western countries towards the Jewish settlements in the West Bank were to take its cue from their policy towards the Palestinian refugees as shaped by UNRWA, it would go as follows: ‘Go ahead Israel, build as many settlements as you want and keep expanding them in perpetuity. We will accept the settlements as a natural expansion of Israel. We will even support the expansion effort financially. Don’t tell the settlers that they will ever need to leave their homes, teach them that it is their legal right to be there. We trust that when the day comes to negotiate peace with the Arab world you will do so in good faith and in a way that guarantees the existence of a sovereign and contiguous Arab state in Gaza and the West Bank.’

As it stands right now the policy of Western countries towards UNRWA is precisely that – it is essentially telling the Arab world: ‘Go ahead and keep inflating the numbers of refugees in perpetuity by registering descendants of refugees as refugees themselves. Register them as refugees from Palestine even though they were born and are living in the Palestinian Authority. Allow them to maintain both a refugee status and citizenship from a third country. Keep telling them that even though they were born in Gaza and Ramallah, they are actually from Ashdod and Ashkelon and can realistically expect to live there soon. Keep them in a discriminated-against state in Syria and Lebanon, where their basic human rights are denied, just so they can keep the conflict alive. We trust that when the day comes to negotiate a final settlement with Israel, you will do so in good faith in a way that guarantees the coherence and existence of a Jewish state.’

If the first policy appears preposterous to Western governments who support peace by means of a two-state solution, then so should the second. If Western countries truly want to remove obstacles on the road to peace they cannot condemn the growth of settlements on one hand and condone the manufactured growth of the number of refugees on the other. Either both the growth of settlements and the inflation in the number of refugees should be treated as obstacles to peace, or neither should be. Moreover, whereas Israel has demonstrated time and again that for peace with Egypt – and for much less than peace in Gaza and the northern West Bank – it will ruthlessly and effectively uproot settlements, the Palestinians have yet to demonstrate that they are willing to take even the smallest steps to give the refugee issue its true and proper proportions.

If the West truly wants to promote a coherent policy that supports a two-state solution and does not favour one side over another, it should use its power as the financial supporter of UNRWA to steer its practices along a more constructive path. The welfare, education and health services provided by UNRWA could continue and even be expanded, but their provision should be based on need, not refugee status.

In Gaza, where there is no Israeli presence and which is clearly part of Palestine, the continued registration of Palestinians living in Palestine as refugees should be discontinued. In the West Bank, in the areas under Palestinian Authority control, the funds currently going to UNRWA should go to the Palestinian Authority for the provision of services, while the designation of the citizens of the Palestinian Authority as refugees should also be discontinued. Finally, outside the West Bank and Gaza, UNRWA’s work should be merged with that of the UN High Commissioner for Refugees and operate on the same basis as all other refugees in the world, with efforts directed at securing the equal rights of the descendants in Lebanon and Syria where they were born and have lived their entire lives.

A first effort in this direction was taken in 2012 when the US Senate, acting on the initiative of Senator Mark Kirk, introduced an amendment to the budget bill, requesting that UNRWA report ‘on the number of refugees that it services separate from their descendants.’ The US Senate Appropriations Committee asked for nothing more than information and transparency in reporting in return for the 250 million dollars of US taxpayers money that it supplies UNRWA annually. It did not ask for aid to be cut. It did not call for cessation of services to the millions of descendants; it only asked for transparency in numbers. Even though the amendment did not go through, given that the budget bill as a whole did not move forward, the US Senate sent out a powerful message for peace in that the attainment of a two-state solution cannot be congruent with UNRWA’s practice of inflating the number of refugees. And if the EU wants its recent stringent steps against Israeli settlements to be taken as genuine efforts to keep the two-state solution alive as the path to peace, it must pursue policies that address all obstacles to peace.

By Israel Bartal
Shlomo Sand’s political treatise, The Invention of the Land of Israel, is another link in... Read more > Autumn 2013