Israel 70 | Young Voices: Can Jerusalem become a capital of tolerance? 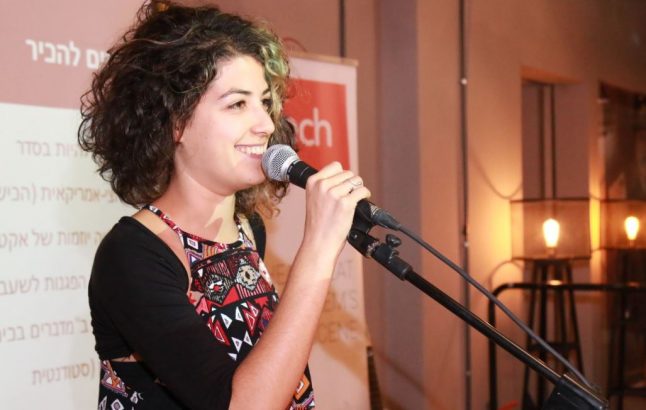 Michal Shilor believes Jerusalem should be known as ‘the tolerance capital of the world.’ She works at the Jerusalem Intercultural Center as ‘Activism for Tolerance’ Program Director, consulting for more than 80 independent, grassroots initiatives from across the city. She is also the founder and chairwoman of 0202 – Points of View from Jerusalem, which provides unedited, unfiltered narratives from East, West, and Haredi Jerusalem, in Hebrew, English, and Arabic.

This past May, Jerusalem experienced its potentially most dangerous week. There was Jerusalem Day, which celebrates the unification of Jerusalem in 1967 and signifies its occupation simultaneously. A day later, the American Embassy moved to my city. And one day after that fell Nakba Day – marked by my Palestinian neighbours as the day of their catastrophe (Israel’s independence). And all just before the first day of Ramadan, when more than a third of the city fasts until sundown every day for a month and things seem to slow down, even for the Jews.

Although this series of events could have turned Jerusalem into a war-torn city, they did not, because, although many people are unaware of this development: Jerusalem is changing in ways that mean it has the potential to become the tolerance capital of the world.

This is a new development. After the city was reunified or captured (depends how you look at it) fifty years ago, East and West Jerusalem remained divided de-facto; separate lives, different languages, clashing narratives, During the decades that followed, Zion Square, the heart of West Jerusalem, became the centre for protests and for hatred. The Black Panthers, an Israeli protest movement of second-generation Jewish immigrants from North Africa and Middle Eastern countries, demonstrated in the square, protests sometimes ending in clashes with the police, arrests, and injuries. The city suffered terror attacks that took the lives of 22 and injured 90. In 1995 the square hosted the infamous protests in which a picture of then Prime Minister Rabin in S.S. uniform was held aloft. And in the summer of 2014, during Operation Protective Edge, shortly after the murders of Eyal Yifrach, Gilad Shaar, Naftali Frenkel, and of Muhammad Abu-Khdeir, Zion Square once again became a centre of protest with right-wing and left-wing factions taking over the square, each yelling their slogans (‘death to Arabs’ and ‘revenge’ on one side; ‘down with fascism’ and ‘Bibi, resign’ on the other).

But then something changed. A couple of right- and left-wing college-aged students – myself among them – decided this wasn’t any way to deal with the turmoil of our country. Much to the disbelief of the protestors in the Square, we sat down smack in the middle of the warring protest groups, and started singing songs of mourning, lighting candles and playing the guitar. Some protesters aimed their anger at us in the form of cigarette butts, beer bottles, and spitting; but some sat down and joined us. In retrospect, we made history by simply starting to talk. At the outskirts of the singing circle, a barrier between the protesters, and us were discussions – real, tough discussions. And these discussions changed Zion Square forever.

‘Speaking in the Square’ is an initiative we started in July 2014 and continued over the next three years. We came to the square week after week, to create dialogue, to encourage tolerance, and to create a space in the public sphere where all opinions could be heard. During those three years, Zion Square saw no protests; only spaces for mutual solace and understanding. When 16-year-old Shira Banki was murdered in Jerusalem’s Pride Parade in 2015, her public shiva consisted of nightly dialogue circles for seven straight nights – in Zion Square rather than at the spot she was stabbed. In 2016, the municipality officially renamed the square as the centre for ‘dialogue and tolerance,’ and even asked architects to submit proposals for ideas how to make the space even more available for dialogue and tolerance. Alongside these changes, across the entire city small, grassroots groups blossomed and new ideas for promoting tolerance emerged. Jerusalemites began to see their city’s diversity as an asset.

The seeds that were planted in those years are now growing fast. A recent survey (link in Hebrew) found that 82 per cent of Jerusalemites believe it is important to meet people who are different from them; 95 per cent reported that when they meet someone not from their nationality or religion who needs help, they help; 70 per cent reported not having a problem with living in a building with neighbours from a different sector; and 64 per cent wanted their municipality to be comprised of Haredi, Arab, religious and nonreligious members. When people in the streets of Jerusalem were asked what they thought of Jerusalem as ‘the Tolerance Capital of the world’ their responses were astonishing and belie the city’s bad reputation.

That doesn’t mean there is not intolerance, of course.

East Jerusalem is considered occupied by international law, and its residents aren’t granted Israeli citizenship unless they go through a tortuous process that usually lasts several years. They have to prove their residency, which can be revoked for reasons like living or spending too much time outside of Jerusalem, and they need special documents in order to travel outside of Israel. There is racism, there are disputes, and different communities often find it difficult to converse with one another, let alone legitimise narratives different than their own.

Still, 160,000 of us – Jews, Arabs, asylum seekers, LGBTQ, blind, disabled, Ethiopians, right-wing, left-wing – ride the light rail every day, and there are so few racist events reported that there is no active record of them (we checked!). Our city is roughly a third Arab (Muslim and Christian), a third Haredi, and a third modern orthodox or secular. We meet each other in the streets, on public transportation, in restaurants, in hummus places, in garages, in taxis. There are over 1000 activists in a network for tolerance in the city; 500 activist events that celebrate diversity every year; 80 organisations who work towards promoting tolerance in the city; and two coalitions of activists and organisations. On Jerusalem Day alone – a day disputed and uncomfortable for most Jerusalem residents, and best known for the controversial ‘Flag Parade’ that goes through the Muslim quarter – there were over 80 events that promoted tolerance and created a different – I’d argue an authentically Jerusalemite – narrative of the day.

Just as a city which has infrastructure for bike lanes, hosts cycling events, includes a growing community of riders and attracts people from abroad to experience the ‘bicycle capital of the world’, so Jerusalem can become the tolerance capital of the world, despite the serious and unresolved political-diplomatic issues facing the city.

Chen Amram, a local slam poet and activist says we should dare to call Jerusalem the Tolerance Capital of the world. When considering my vision for Israel, my hope is that it will follow in Jerusalem’s footsteps – that the vast array of different groups within Israeli society will find a way to dialogue with one another, and find that more things unite us than divide us.

By Yaniv Yitshak
Yaniv Yitshak lives with his wife Hadassah and their two children in the community of... Read more > June 2018