by Elai Rettig
BACK 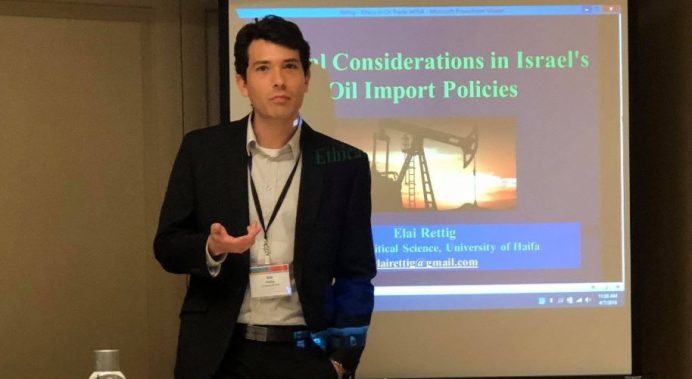 Elai Rettig is a PhD candidate at the School of Political Science in the University of Haifa, a researcher at the Haifa Research Center for Maritime Policy and Strategy, and a Neubauer Research Fellow at the Institute for National Security Studies (INSS). He argues that the discovery of large offshore gas fields have presented Israel with the chance not only to export gas to its neighbours but to become a leading and integrated state in a new region called the Eastern Mediterranean.

Israel’s newfound natural-gas reserves are connecting the once-isolated Jewish State to its neighbours like never before. In the coming decade, Israel has the potential to become an important source of energy for its allies and a positive economic force for the entire region.

Since its birth, Israel has struggled to ensure reliable and affordable supplies of energy for its domestic market. Engaged in a continuous conflict with its oil-rich neighbours, Israel was a country completely disconnected from its surroundings with no common energy infrastructure or pipelines. Over the years, Israel has viewed weaning itself off its dependency on energy imports as a strategic necessity. There have been numerous failed attempts at domestic oil exploration and aborted efforts to introduce nuclear energy. Energy independence has been a ‘holy grail’ for successive Israeli leaders, with Prime Minister Golda Meir once lamenting that ‘the one thing we Israelis have against Moses is that he took us through the desert for 40 years to lead us to the one spot in the Middle East that had no oil’.

This grim picture dramatically changed in 2009 with the discovery of large offshore gas fields in Israel‘s Exclusive Economic Zone (EEZ). These fields (mainly Tamar and Leviathan) have not only provided Israel with a much-sought-after domestic source of energy, but also with an unprecedented opportunity to export gas to its neighbours and so fun­damentally alter its role in the region. Breaking away from its long-standing ‘siege mentality,’ the economic and geopolitical potential of the new gas discoveries have convinced Israeli policymakers that Israel no longer needs to remain a ‘black sheep’ in the Middle East, but can instead become a leading positive force of a new region called the Eastern Mediterranean (East-Med).

By sending out ‘roots’ in the form of pipelines that connect this new region together, Israel can become an indispensable fixture in a space that once rejected it. This realisation has opened up a new frontier for Israeli foreign relations. Successful negotiations to export gas to Egypt and Jordan, as well as visibly warming relations with Cyprus and Greece centred on gas trade options, is strengthening the perception of a new East-Med regional alliance.

Israel’s new ‘pipeline diplomacy’ serves a multitude of foreign policy goals, both with regard to its immediate neighbours and to its relations with the EU. Some of these goals are more feasible than others, but all signal the likelihood of a major change in how Israel is perceived in the region. It is hoped that the export of Israeli gas can help to:

ensure Jordan’s stability and security at a time when its electricity and water resources are increasingly strained;

improve economic stability in the Palestinian Authority (and in the future may even include Lebanon and Syria);

make Israel relatively immune to the threat of sanctions and boycotts emanating from the EU. By exporting gas to individual EU members such as Cyprus, Greece and Italy, Israel believes it may lessen the chances of any future unanimous resolution against it, thus turning gas into an integral part of a broader ‘divide and conquer’ strategy to improve relations with individual European states at the expense of what it views as a hostile European Parliament.

Although the last two decades had repeatedly shown that energy exports do not prevent sanctions against the supplier, this line of thinking demonstrates the excitement in Israel about its new gas deposits, and the confidence it has lent the hope of promoting a new ‘Eastern Med’ regional reality.

In order to fully realise the regional and geopolitical potential of its gas discoveries in the upcoming decade, Israel should continue to adjust its traditional geopolitical way of thinking. It should turn its eyes to the sea – its peaceful western border – and develop a comprehensive maritime strategy to improve commerce, infrastructure, and naval cooperation with surrounding countries. Israel should stop viewing its borders only as ‘frontlines’ to be defended from invading armies, but as gateways to new economies and opportunities. And it should strive to become a leading and integral part of the region’s economic, technological and environmental development for the next 70 years.