Israel Election 2021 | ‘Why I am voting for Yisrael Beytenu’

by Oded Forer
BACK 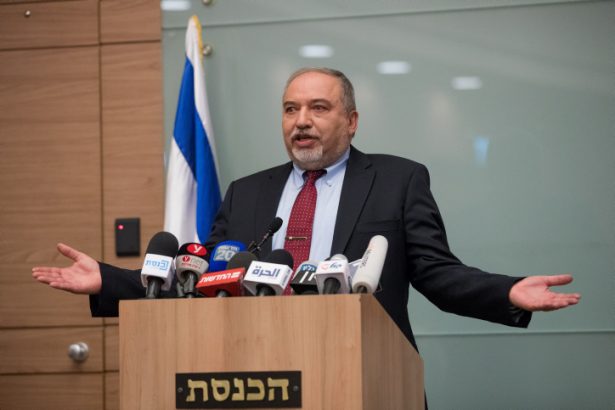 Avigdor Lieberman announcing his resignation as Defence Minister in the government following the ceasefire with Hamas in the Gaza Strip, 14 November 2018. Photo by Yonatan Sindel, FLASH90.

These elections are about the future of the State of Israel. Not just some theoretical conceptualisation of where we will be in the coming years, but an opportunity to ensure that the Jewish state is sustainable.

The coronavirus pandemic has had many unforeseen consequences. One of them is to be given a taste of our future in Israel if we continue to allow the growth of a ‘state’ within a state – namely the ultra-Orthodox community. It’s a state many of whose leaders teach their followers to ignore the country’s laws, to take without giving, to see themselves as separate from wider society, and to maintain their way of life even if it costs others and themselves their health, livelihoods and lives. Even more worryingly, in some instances violence and deterrence emanating from parts of that community have cowed most of our leaders and law enforcement into silence and inaction.

From the very beginning, many ultra-Orthodox leaders refused to countenance the closing of synagogues and yeshivot, even when it was clearly demonstrated that they were a major source for the spread of the contagion.

Nonetheless, I do not blame only the ultra-Orthodox community for these ethical, moral and halachic errors. I blame a political leadership which at best looked the other way and at worst assisted in these life-threatening ways.

For example, over the last nine months, this government refused to use the ‘traffic light system’ of only closing down areas of high infection, because doing so would have shut down mostly ultra-Orthodox areas. Instead, the government shut down the whole country so as not to be seen as singling out the ultra-Orthodox.

Yet even then there was discrimination – while the ultra-Orthodox currently represent 40 per cent of new coronavirus cases, they have only received 2 per cent of the fines for breaking the restrictions. We witnessed police coming to close down businesses or distribute fines for non-compliance all over the country yet ignoring the mass events which continued in the ultra-Orthodox areas, even when they were widely known to all.

Tens of thousands of businesses have been irretrievably harmed or been forced to close, hundreds of thousands of people have become unemployed, and millions of children forced from their schools, only so the prime minister can maintain his current and future political alliance with the ultra-Orthodox political parties.

Those who allow these things to continue with a nod and a wink, or with a limp and vague condemnation, care little for health, livelihood and life. For them, politics trumps all other considerations.

Our current leaders are sending a clear message of immunity and impunity to this community, and its leaders.

We, the general public – religious, traditional and secular – should also be learning our lessons.

While today it is about a pandemic that hopefully will be under control in a matter of months, we must start preparing for the future.

We already live in a situation whereby, while only 55 per cent of ultra-Orthodox work, two thirds of their young adults own their own property. Meanwhile 88 per cent of the rest of the population works and less than 30 per cent own a property. The average person in Israel pays 4,371 NIS in monthly taxes, the average ultra-Orthodox person pays 1,516 NIS.

One doesn’t need to be an economist to understand the unsustainability of this situation.

In a generation or less, it will be too late to change the future, as the ultra-Orthodox population moves from 12 per cent of the population to 25 per cent and beyond. Today, around half of all Israeli children in the first grade are ultra-Orthodox. This will ensure a political reality which demographically will be exponentially harder to ignore.

This means that when our children and grandchildren are ready to serve in the army, go out into the world and make a living, the situation will become increasingly unsustainable. They will sink under a constantly rising tax burden that will need to be raised in order to keep others in the manner to which they have become accustomed.

Dealing with this problem next year is too late, it must be dealt with today. Yisrael Beytenu is the only party which has officially stated and promised that it will end this situation and put the ultra-Orthodox political parties in the opposition. They will no longer control the Knesset Finance Committee, the Housing Ministry, or any other centre of power where they work solely for their own constituency to the detriment of all other Israelis, and imperil our future.

This is what these elections are about. The very future of the State of Israel.