Israel Election 2021 | ‘Why I am (reluctantly) voting for Meretz’ 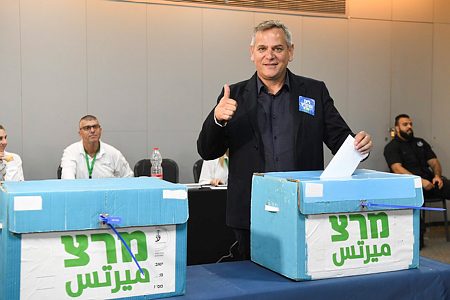 Meretz leader Nitzan Horowitz casting his vote at a polling station in Tel Aviv during the Mertz leadership contest, 27 June 2019. Photo by Flash90.

During the Corona pandemic, I have been disappointed with some of the strategies Meretz has used to express its desire to separate religion and state. Even though I very much believe that the State should either fund all religious denominations equally or none at all, some of the party’s advertising during the Corona pandemic has made generalisations about Haredim that should have no place in a progressive party.

My desire to support Meretz despite the issues I have with the way it communicates its agenda mainly lies in the fact that I feel the party will fight hardest in the Knesset for the values I hold dear. These include ending the occupation, preventing loss of life from war and terrorism, combatting violence against women, stopping gun violence in Arab communities, and ensuring Health Ministry rules during the pandemic are enforced equally – without fear or favour.

As a party that has been fighting for a more just economy and justice for Palestinians since the founding of the state (in its previous incarnation), the positions of Meretz on civil marriage, public transport on Shabbat and advancing an agreement with the Palestinians are actually shared by the majority of Israelis. Yet this is rarely reflected in the number of votes it receives. This shows that the party needs to work in a much smarter way at building solidarity between marginalised communities.

Even in opposition, Meretz MKs have proven to be some of the most effective in the Knesset. Despite not having been in government since Ehud Barak’s premiership over 20 years ago, Meretz MKs have in recent years passed laws that have prevented bank loans to tycoons, increased support for people with disabilities, and helped women in shelters keep their financial benefits.

At certain moments in history, there is no sham in choosing to be in opposition. Vocal opposition parties such as Meretz are essential elements of every democracy. Whether or not they are included in the next coalition, I know Meretz will continue standing in the front line of defending Israel’s human rights NGOs and speaking out further against settlement construction on land that should be part of a Palestinian homeland.

Benjamin Netanyahu’s recent embrace of Jewish supremacists in the Religious Zionists Party, who justifies revenge ‘price tag’ attacks on Palestinians and delegitimises Reform Jews and the LGBT community, has been deeply disappointing for me as an Israeli.

The Zionist dream should be realised in a way that demonstrates to the world that Jewish self-determination doesn’t necessitate racism and discrimination against Palestinians who live in Israel, the West Bank and Gaza. The answer offered in the Jewish-Arab partnership presented by Meretz shows that a better way is possible, aspiring for a future in which all people will have the opportunity to live with freedom and dignity throughout this twice promised land.