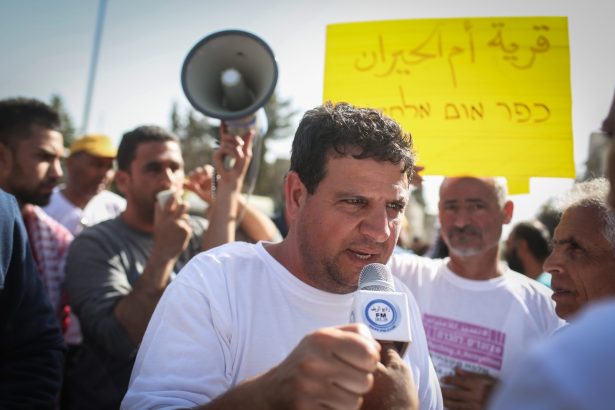 Joint List MK Ayman Odeh speaking with the press in front of the President's residence during a demonstration in Jerusalem, 29 March 2015. Photo by Hadas Parush, Flash90.

At first glance, it may seem like these elections – like the previous three – concern one topic: Benjamin Netanyahu, and his unconstrained effort to keep himself out of jail. Yet this view, promoted by many so-called opposition parties, is only a camouflage to the mechanisms of incitement, oppression, cronyism and patronage which allowed Netanyahu’s premiership in the first place.

I genuinely believe in all the beautiful words we were taught in childhood; words that sound almost naïve in these elections: civil equality, bridging social and economic gaps, sexual and religious freedom, and more. In light of this, my moral and political aspirations don’t amount to the replacing of one right-wing prime minister with another. I’m in for the grand prize: the creation of a true democracy that treats all citizens justly.

I am proud to resist the occupation, or may I say the apartheid, of Palestine – which introduced Israel to norms of oppression. I resist the brutal economy, built on socialist benefits for the rich and harsh capitalism for the rest, that has paved the way for the corruption which has gotten completely out of control. I resist the way Israel abuses its asylum seeker community and deprives it of the right to refugee status. I resist the abandonment of women to domestic violence and the exploitation of our natural resources. For all those reasons, I have no choice but to vote for the Joint List.

As a Jew, some find it strange that I vote for an Arab-led party. But I believe that – in contrast to the positions of the so-called centre left parties – the interests of the ideological left, to which I proudly belong, completely overlap with the political goals of the Palestinian minority. Maybe it’s due to the harsh discrimination that the minority has always been subject to, but the fact is that the Joint List has always loudly resisted all the trends that led to the current deterioration of Israel’s democratic sphere. Moreover, I believe there’s a great importance in the growing support for the Joint List among Jews. There are people who truly want a Jewish-Arab partnership and aren’t afraid to act accordingly.

The arbitrary COVID-19 restrictions revealed to many that the government is only worried about its political survival. Normal citizens suspected of being infected with Corona have found themselves subject to the surveillance techniques the government uses in Palestine and have lost their sense of privacy. When the demonstrations were outlawed, others discovered that police brutality is not only used against ultra-Orthodox or Ethiopian Jews, but against anyone challenging the government. All began to understand that even in the midst of one the greatest crises in Israel’s history, the parties of the existing wide and maladjusted government are acting completely irresponsibly and failing to transcend their own narrow interest. I hope many of the disillusioned people will join us at the Joint List, and I am optimistic that they will.

The vote for the Joint List is not only ideological, but also pragmatic: this is the only party that remains suspicious not only of Netanyahu, but of those trying to replace him – Gideon Saar, Yair Lapid and Naftali Bennett. On the one hand, the Joint List is entirely devoted to a political change, as it proved in the last elections, when it recommended Benny Gantz as prime minister. On the other hand, if another dreadful government will form, the Joint list are the only ones I wholeheartedly trust to oppose it.