Fathom eBook | The Life and Legacy of Yitzhak Rabin 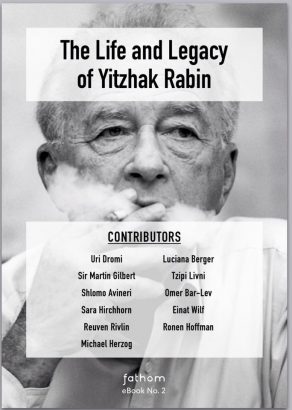 Fathom has published a new eBook to mark the 20th anniversary of the assassination of Yitzhak Rabin, which can be downloaded here.

The weeks and months building up to the assassination of Yitzhak Rabin saw widespread incitement against the Prime Minister. Rallies against the prime minister and peace process regularly featured screams of ‘traitor’ and ‘murderer’. This peaked at an opposition rally in Zion Square in Jerusalem, where banners from the crowd depicted Rabin in an SS officer’s uniform.

In an effort to show public support for the peace process, an enormous peace rally was held in Kings of Israel Square in Tel Aviv on 4 November 1995. ‘This rally must send a message to the Israeli public, to the Jewish community throughout the world, to many, many in the Arab world and throughout the entire world, that the people of Israel want peace, support peace, and for that, I thank you very much,’ were the final words of Rabin’s speech to the rally. As he left, Rabin was shot three times by Jewish extremist Yigal Amir. News of his death was met with an outpouring of shock and sadness.

This deep sense of loss was not limited to the Israel, but was felt across the world. US President Bill Clinton encapsulated the mood: ‘because words cannot express my true feelings, let me just say shalom, chaver – goodbye, friend.’ His death was mourned too by old adversaries. King Hussein of Jordan said at Rabin’s funeral: ‘I had never thought that the moment would come like this when I would grieve the loss of a brother, a colleague and a friend – a man, a soldier who met us on the opposite side of a divide whom we respected as he respected us. A man I came to know because I realized, as he did, that we have to cross over the divide, establish a dialogue, get to know each other and strive to leave for those who follow us a legacy that is worthy of them. And so we did. And so we became brethren and friends.’

Perhaps as a consequence of the circumstances of his assassination, Rabin today is associated internationally largely with the pursuit of peace. Less-often recalled are his realism and unrelenting commitment to the security of the State of Israel. Rabin was no naïve and idealistic peacenik – during the First Intifada he reportedly ordered the IDF to break the bones of Palestinian stone-throwers in order to restore deterrence. His willingness to compromise and pursue an agreement with Israel’s neighbours came from his calculated belief that the circumstances were right for an agreement, that it was possible to achieve, and that it was in Israel’s interest to do so.

Now, 20 years on from his assassination, the question is often asked, ‘Did the peace process die with Rabin?’ At face value no: Israeli governments continued to negotiate with the Palestinians in order to keep the vision of peace alive: Ehud Barak in 2000 and 2001, Ehud Olmert in 2008. Even Benjamin Netanyahu, who himself bitterly opposed the Oslo Accords, signed agreements which continued the process with the PLO as Prime Minister in 1997 and 1998, spoke in his 2009 Bar-Ilan speech of two states for two peoples, and in 2013 entered into US-sponsored peace talks.

However, we are far away from the short-lived optimism of the 1990s, best symbolised by the iconic photograph of Rabin and Arafat shaking hands on the lawn of the White House. After repeated failure to reach an agreement, relations between the Israelis and the Palestinians are at a low. Furthermore, the Middle East today is in a state of turmoil and insecurity, with states collapsing and extremist non-state actors filling the void, creating an unpromising environment for a diplomatic breakthrough.

That said, we still live, undoubtedly, in a post-Rabin Middle East. The Palestinian Authority created by the Oslo Accords still functions, and its on-going security cooperation with Israel is a key factor that has controlled violence and extremism in the West Bank in the last ten years. What’s more, two thirds of the Israeli public still agree in principle with a two-state solution, a position that was accepted only by a minority on the Left before Rabin signed the Oslo agreements. Moreover, some of the factors which drove Rabin to pursue the Oslo process are even more pronounced today: the rise of Islamic extremism which he anticipated continues, creating an ever greater incentive for Israel and moderate Arab states and actors to work together.

The content of this eBook is drawn from those who had direct knowledge of Rabin and those who were inspired by him. It aims to offer an insight into Rabin the man, the soldier and the Prime Minister and to offer some thoughts on his legacy today.

Our forward is an article by Reuven Rivlin, President of the State of Israel, first published in Hebrew in Yediot Ahronot.

Uri Dromi, Rabin’s former spokesperson recalls the special qualities he saw up close that made Rabin an extraordinary statesman, and explains why Rabin set aside his own deep reservations in signing the Oslo Accords.

Luciana Berger, Labour MP and member of the Shadow Cabinet, writes on the importance of Rabin’s legacy outside of Israel.

On his contributions to Israel, the significance of his assassination and how to revive his legacy we conducted a symposium involving Tzipi Livni, Omer Bar Lev, Einat Wilf, Michael Herzog, Ronen Hoffman and Sara Hirchhorn.

In a glimpse into Rabin the person, we have reproduced Sir Martin Gilbert’s account of accompanying him around the Churchill War Rooms and to gain insight into Rabin the strategist, Shlomo Avineri exposes the rationale which inspired his political actions.

To celebrate the life of Yitzhak Rabin we present a photo essay of key moments, and to celebrate his legacy we present the text of his 1994 Nobel Peace Prize acceptance speech.

Fathom has published a new eBook to mark the 20th anniversary of the assassination of Yitzhak Rabin, which can be downloaded here.

Our Voice of the Fortnight is Peter Beinart and Ben Rhodes, Deputy National Security Advisor from 2009-2017, talking about working on Israel, the peace process, and Iran during the Obama administration. Rhodes draws insights from interactions with different lobby groups, presidential travel to Israel and a memorable meeting with young Palestinians in Ramallah.

Our Image of the Fortnight is a group of former Buchenwald inmates on board the refugee ship 'Mataroa' in the Haifa port, 15 July 1945. Photo by Kluger Zoltan, GPO.