by Ronen Hoffman
BACK 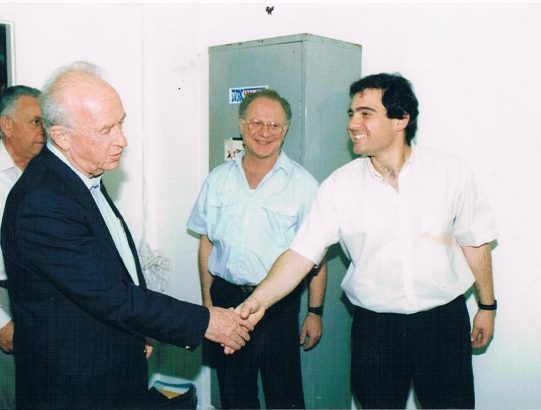 Toby Greene: Looking back on the life of Yitzhak Rabin, what stands out for you as his outstanding contribution to the State of Israel?

Ronen Hoffman: Yitzhak Rabin made a very unique contribution to the State of Israel on several levels. First of all he was a man for whom values, security, and ideology were always above any political and personal consideration. This is something that was quite common in the past but it’s very rare to find such leaders today. Another of his very unique contributions was that in any situation, even in the most complicated situations, he knew exactly how to recognise and how to differentiate between the very important things, and all the rest which did not have to be dealt with at that moment.

He also got into the slightest details of any situation, and sometimes it took him a long time to make decisions because he took the time to investigate, to ask all the questions that needed to be asked, and only when he was convinced would he make a decision.

The most important, most significant contribution to the country was the fact that he was flexible with his perceptions without compromising his values and his ideology. When there was no chance for negotiations, he would focus only on military might. But as soon as there was a window of opportunity to start speaking and negotiating he was open to explore that opportunity without losing the concern for security. So, on the one hand, he had both a tough and solid personality and ideology, but he combined it with flexibility, changing and adapting his views.

RH: Rabin was always a man who believed in actions. In other words, he would move forward only when he was satisfied with the previous treaty being implemented. With the Syrians and the Jordanians – whom he trusted more than the Palestinians at the time – he was willing to negotiate over a full peace treaty. With the Palestinians he agreed to negotiate only on interim agreements. He wouldn’t rely on trust; he would rely on implementing the point agreed upon. So my answer would be that it depends on the actions: if he saw that the other side was reverting back to Intifada he would probably stop the process. But if the other side would have implemented and respected the agreement, he would continue it. It was really a matter of going step by step, being careful and remaining a little suspicious.

TG: Though Rabin was aware of the risks he chose to pursue a path, when he recognised an opportunity, of ‘negotiated coexistence’ with the Palestinians. Is there a way back to that path from the situation we’re in today and if so how?

RH: That was more than 20 years ago, and since then the Middle East has changed dramatically. Don’t forget that Rabin was a general, and he was concerned about the strategic threats which Israel had to face. At that time there were organised, well-established armies and military forces around Israel. Today the situation is different, and the threat has changed. Rabin would look at the Middle East today and say, okay, there are still threats along our borders, there are still rockets and missiles directed towards us, but there are other pragmatic forces in the Middle East who can be our potential partners today and not part of the coalition of enemies, like the Saudis and Gulf States.

He was very pragmatic and I believe that today he would point to the Saudi Initiative. He would not accept all of it, but use it as a framework to refer to. I don’t believe that he would rely on or focus on bilateral negotiations today with the Palestinians; he would have preferred to deal with partners whom he trusted, like the Arab states in the region, rather than the current leadership of the Palestinians.

TG: Do you have any personal impressions or memories that you have from when you worked with Rabin that you want to share?

RH: I can tell you that Rabin was not a man of small talk and he was not a diplomat, so sometimes people would think that he’s tough and maybe even not very nice and obviously not very diplomatic. On the other hand talking straight is a great advantage – because what you’re going to hear from him is what he really thinks and what he really believes, even if sometimes it was difficult to be around him.

He knew how to be very direct and sometimes it was unpleasant because he expected that from himself and from other people also. But at the same time it was very comforting to know that he would tell you exactly what he thought, exactly what he believed. I just want to add, on a personal note, that I feel lucky that I had an opportunity to work with and to learn from such a great man and we’re missing that kind of leader today, unfortunately.