by Martyn Hudson
BACK 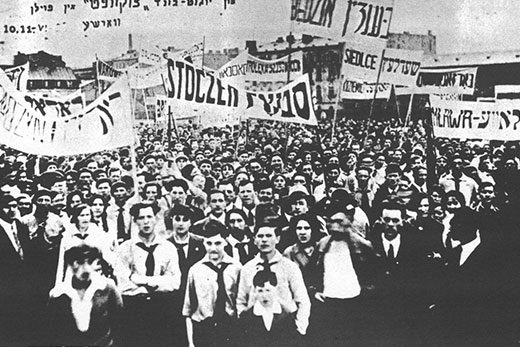 After the Holocaust, Deutscher came to believe that a Jewish state was ‘an historic necessity.’ Supporters of the Jewish Labor Bund rally in Warsaw in 1932.

The Polish historian and socialist Isaac Deutscher coined the term ‘the non-Jewish Jew’ to celebrate the tradition of Spinoza, Heine, Marx, and Trotsky. But he argued that internationalists must come to terms with the Holocaust and accept the ‘historic necessity’ of Israel.

The Non-Jewish Jew before the Holocaust

Amongst the students and academics who would become the foot soldiers of a sexually and socially liberated new left in the late 1960s, Isaac Deutscher was an anachronism – a revenant not of one but three lost worlds of the early 20th century – Polish Hasidism, European Bolshevism, and Polish Trotskyism.

Having survived the Stalinist purges and the death camps, Deutscher became a journalist and then a historian, writing a (rather flawed and confused) biography of Joseph Stalin and a magisterial three-volume study of Stalin’s opponent, Leon Trotsky (The Prophet Armed, The Prophet Unarmed, The Prophet Outcast). The trilogy was a kind of Torah for generations of activists who were expelled from or fled Stalinism in the 50s and 60s and tried to find their way to a new form of liberatory politics.

Deutscher was a non-Jewish Jew. The term, which he coined and gave to one of his most influential books, referred to a set of qualities and a set of people. Baruch Spinoza, Heinrich Heine, Karl Marx, Rosa Luxemburg, and Leon Trotsky were each brilliant humanists, rational searchers for the laws of human development and passionate fighters for justice and human emancipation. And they were cosmopolitans, living in the borderlands between civilisations, religions and nation-states. They produced brilliant heresies of emancipation shot through with a profound internationalism and universalism.

Deutscher, however, began to think about the non-Jewish Jew differently. He was born into the midnight of the century, witness to both the Stalinist enormities and what he referred to as the huge, ominous, baffling, terrifying degeneration of European character that led to the Holocaust. As such he could not simply repeat the sun-lit universalism of those earlier ‘non-Jewish Jews’ that he and his father so loved. He came to understand that rootedness had its place; that place had its place, so to speak, even for internationalists, and that the central characteristic of the non-Jewish Jew had to be unconditional solidarity with the victims.

The Non-Jewish Jew after the Holocaust

Having emerged from Hasidism into Trotskyism – which he considered to be the inheritor of a messianic revolutionary tradition and a rational, universal project of emancipation – Deutscher was shattered by the emergence of anti-Semitism within the Russian revolution, a revolution which had seen the first state Hebrew theatre, the Habima, coming into being and the emancipation of Jewish letters and life. The Stalinist bureaucratic dictatorship not only destroyed the intimate link between Bolshevism and the Eastern European Jewish communities, it also sundered the faith in many of a purely European solution to pogromism, and subsequently secured an ideological victory for the return of the diaspora to its own nation.

Deutscher, then, wrote against the backdrop of the Holocaust and the emergence of the state of Israel. Originally an anti-Zionist Jew, Deutscher talked in the 1950s of his guilt about encouraging his fellow Jews to stay in Europe and fight for socialism.

‘I have, of course, long since abandoned my anti-Zionism, which was based on a confidence in the European labour movement, or, more broadly, in European society and civilisation, which that society and civilisation have not justified. If, instead of arguing against Zionism in the 1920s and 1930s I had urged European Jews to go to Palestine, I might have helped to save some of the lives that were later extinguished in Hitler’s gas chambers.

For the remnants of European Jewry – is it only for them? – the Jewish State has become an historic necessity. It is also a living reality. Whatever their cleavages, grievances, and frustrations, the Jews of Israel are animated by a fresh and strong sense of nationhood and by a dogged determination to consolidate and strengthen their State by every means at their disposal. They also have the feeling – how well justified – that the ‘civilised world’, which in one way or another has the fate of European Jewry on its conscience, has no moral ground to stand on when it tries to sermonise or threaten Israel for any real or imaginary breaches of international commitments.

Even now, however, I am not a Zionist; and I have repeatedly said so in public and in private. The Israelis accept this with unexpected tolerance but seem bewildered: ‘How is it possible not to embrace Zionism?’ they ask, ‘if one recognises the State of Israel as an historic necessity?’ What a difficult and painful question to answer!’

Deutscher’s was a singular voice on the left – one almost entirely missing from today’s New Left Review or London Review of Books – writing that the flight from Europe and the formation of the state of Israel was akin to a man jumping out of a burning house and landing on top of another man – neither of them being at fault. (It is actually Amos Oz who has inherited this sensibility.) But he could never celebrate this necessity; as a universalist, it always remained for him a defeat.

Whilst he acknowledged its huge achievements, he considered Israel to be a ‘raft-State.’ Perhaps unsurprisingly, he considered those aspects of Israeli life which were most egalitarian to be its greatest victories, attributing them, not to some myth of Jewish communal life, but to the successes of early Bolshevism. He was consistently impressed by the Kibbutzim, seeing them not as comparable to the backward Kolkhoz of the steppes but as ‘laboratories of the future’ which were tracing, perhaps in a utopian manner, intimations of what a new collective, universal social formation might look like.

The question of home – specifically the home of European Jewry – obsessed Deutscher for the last half of his life. He had rejected his Hasidic heritage early, though he always retained a love of the literature and stories of Hasidism, including the story of the flight out of Egypt. Born on the border of three empires and not really at home in any of them, Deutscher kept forever a love of his own lost homeland – a world lovingly documented by Joseph Roth – even when he was most impatient with its provincialism, backwardness, and lack of interest in reason or human emancipation.

Having disposed of his ‘Talmudic ghosts’ and been left as the only survivor amongst the spectres of his erstwhile Trotskyist comrades who had all met their deaths at the hands of the Nazis or the Stalinists, Deutscher began to focus his thoughts on the current and future identities present within Jewishness, not least reflecting on the diversity of oriental Judaism and the legacies which the diaspora had brought from Europe. (To some extent Deutscher was an early witness to social fractures that are still present within Israel today.)

Deutscher saw the new Jewish identity forged in Israel as a product of crisis and catastrophe. Again, he did not celebrate necessity and his non-racial conception of being a Jew and his universalism led him to view the resurrection of Hebrew in Israel as reactionary. He also worried that Hebrew anti-universalism and the construction of a narrow sense of national consciousness would put at risk, when combined with geographical separation, much of huge value in Jewish culture and, to boot, ‘implies getting rid of the diaspora, the memories, the habits, the tastes, and the smells of exile – millennia of exile.’ That Jewish exile experience had profoundly enriched European humanity. But when Europe discarded it in the Holocaust, the creation of a new home, a Jewish state, became ‘an historic necessity.’

By Alan Johnson
The cultural theorist Judith Butler has written what she intends as a critique of Zionism... Read more > Winter 2014

By Steven J. Zipperstein
'Had there been telephones back then,’ recalled a close aide years later, ‘Begin would never... Read more > Winter 2014 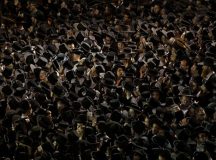 By Dov Lipman
The growing size of the ultra-Orthodox (Haredi) population, and its self-imposed isolation from the worlds... Read more > Winter 2014