by Reuven Rivlin
BACK 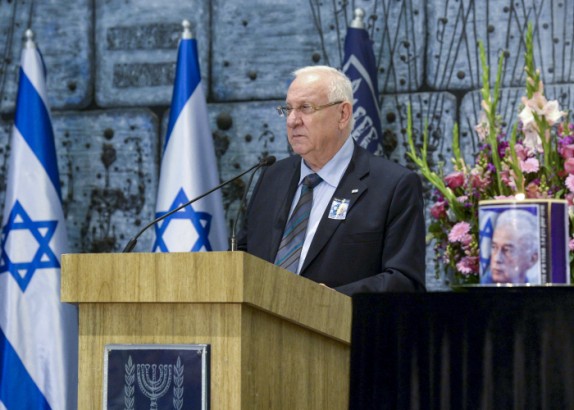 Twenty years after that terrible night when Yitzhak Rabin (of blessed memory) was murdered, I have been asked to put my thoughts in writing. The passing time has not dulled the sharp feelings, and sit here with trembling hands. They are trembling because 20 years have passed since the Israeli compass was disturbed, and the needle has still not settled. When I wonder in what path we have been walking since that night, doubts still run through me, and it seems that the echoes of that scream, that tore through the country’s sky, are still resonating.

Since he was murdered, the memory of Rabin’s heritage has been a matter of deep public controversy.  At one end stand those who demand that the political facet of the murder be emphasised and the conflict between left and right be accentuated. Against them stand those who seek to emphasise all that is wrong in letting conflicts slip into violence and demand that the discourse be channelled to the importance of an inclusive, pluralist culture. I belong to that latter group.

Rabin was not murdered because of the man he was or because of the beliefs and ideas he held. The assassin regarded him as a national symbol and shot him wishing to undermine the decision-making abilities of Israel’s democratic government. That murder was not only a traumatic experience that must not be forgotten, but also a decisive national breaking point.

That terrible night affected me by making me realise that the threat of violent conflict was not vague and distant. That murder represented for me, and for all of Israel, a huge warning sign that cried out, albeit in hindsight, that we were doing things wrong. In the years following the murder I realised how closely we must touch upon those carcinogenic lesions that threaten to metastasise through the body of Israeli democracy, if we wish to remove them.

When recalling the atmosphere of those days, before and after the murder, it is clear that we were divided not by the rules of the game, but by a gaping abyss.  We had no common language, no common vision and we could not point at shared values.  We each thought we were right, and would not consider the effects of such a conflict on society.

In recent decades, our society has been changing. It is divided into political, nationalistic, cultural and ethnic tribes. Yet this tribal division obliges us to examine its social and ethical ramifications.  We must ask what is common to the sectors that make up Israeli society. Do we have a joint civic language, a common ethos, a common ethical denominator that might unite these groups?

Anyone who refuses to ask these questions is ignoring the most significant challenge currently faced by Zionism. If we wish to live, we must bravely stare at this reality and be willing to find answers together; be willing to bring together all the tribes of Israel in a vision of hope and partnership. More than ever before, we need a leadership that does not lose its voice, that can stand up to its public and which does not lose its inner compass, especially during a storm.

The road to building these foundations is long and hard, but if we believe we have been destined – not sentenced – to live together, we will conquer the challenge.

The full essay was published in a collection entitled Three Shots and Twenty Years, edited by Anita Shapira and Nurit Cohen-Levinovsky, published by Yitzhak Rabin Centre and Am Oved, to mark the 20th anniversary of the murder.