by Robert Satloff
BACK 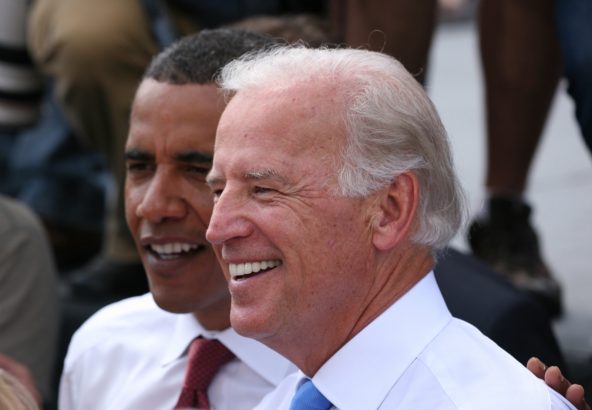 Joe Biden and Barack Obama in Springfield, Illinois, right after Biden was formerly introduced by Obama as his running mate, August 2008. Photo by Daniel Schwen. Wikimedia.

Robert Satloff, the Executive Director of the Washington Institute for Near East Policy, argues that whilst the Middle East will not be a top priority for the incoming Biden administration, we should not expect to see the reemergence of policies under the Obama Presidency, in which Biden was Vice President. Satloff remarks come from an AIJAC webinar on ‘The Aftermath of the US Elections: the Implications for the Middle East and More.’ We are grateful to the AIJAC for permission to republish this article.

Dr Satloff noted that the main priority of a Biden administration would be dealing with COVID-19, but when it comes to foreign policy, his top focus will be on ‘renewing America’s place in the world, restoring America’s role in global alliances, restoring America’s position in the Paris Accords, restoring and strengthening NATO, reaffirming the relationships that we have with our traditional democratic allies.’ The Middle East will be important, but not a top, urgent priority.

Because it will have been a narrow win, he won’t be able to say that the Trump presidency was an aberration and that all Trump did should therefore be reversed.

A Biden administration will believe the US shouldn’t have withdrawn from the Joint Comprehensive Plan of Action Iran nuclear deal, Satloff said, and that stopping Iran achieving nuclear capability requires engaging with Iran.

However, ‘It will argue that this isn’t 2015 anymore; we can’t just go back as though the last five years have not happened … and so the Biden team will make an early offer of what is called compliance for compliance – should the Iranians return to the limits and the prescriptions of the Iran nuclear deal, then the Biden team would be willing to remove the additional sanctions imposed by President Trump.

He would expect the Iranians to refuse, at least initially, as they have their own elections next year, so wouldn’t want to be seen as capitulating.

Biden’s people have said they would take a two-phased approach to the JCPOA, first offering compliance for compliance and, if that is achieved, negotiating an expanded deal to also cover Iran’s ballistic missile expansion and its ‘nefarious activities around the region’.

On the Israeli/Palestinian issue, Satloff said, Biden has ‘endorsed and praised’ Israel’s normalisation agreements with The United Arab Emirates, Bahrain and Sudan, and is likely to want to ‘build on these agreements, make sure they are firm and broadened,’ and ‘try to use them as a bridge to restart a process with the Palestinians,’ including resuming a US relationship with the Palestinians, ‘which has effectively been suspended for the last three years’.

However, he emphasised, ‘It is impossible for me to imagine that any aide to the president is going to write a memo that goes, “Dear Mr President, now is the moment, now is the time, for you to invest the prestige of your just elected office in pursuing Israeli/Palestinian peace, that the peace process is ripe for presidential engagement, and if only you were to get involved, we could bring it over the finish line”.’

He said the Trump Middle East peace plan would no longer be the US default position under a Biden Administration. The Palestinians have said they want to pick up where they left off under John Kerry in 2014 as if the last six years hadn’t happened, which Satloff described as “laughable”.

He didn’t think Joe Biden would be there either, adding, “I think Joe Biden is very different to John Kerry and Barak Obama. He has a life-long affinity for the state of Israel. Joe Biden is one of the very few non-Jewish national politicians in the United States to proudly call themselves a Zionist…He’s no fan of the expansion of settlement activity, and he will certainly let this or any other Israeli government know that, but he’s also on record as saying clearly that disputes with Israel on issues such as that will not in any way be an obstacle to the security relationship that the two countries may have.”

Satloff said he expects a Biden administration to initially try to improve the working relationship between Israel and the Palestinians and only then have high-level political engagement.

Dr Satloff suggested Iran might try to test an outgoing Trump Administration during the transition period, by, for example, attacking US personnel in Iraq, as Trump had previously threatened to close the US embassy if Iraq couldn’t protect US citizens there.

Trump may also try to bring US troops home including as part of deals to get US hostages released.

America’s less democratic Middle Eastern allies, aware human rights will be more of an issue for a Biden administration, may make gestures such as releasing political prisoners to pre-emptively improve the atmosphere, Satloff speculated. However, he said Biden also appreciates relationships with leaders who advance America’s strategic interests and would not likely allow human rights concerns to dominate these relationships.

On the Abraham Accords, Satloff said the UAE took the bold step ‘mostly because of its own national interests, the desire to have a deep, open, multi-faceted relationship between the two most dynamic economies in the Middle East.’ The Trump administration helped as the “midwife” but the real drivers were the Emiratis and Israelis. Satloff thinks other Arab countries, such as Morocco, may move to normalisation even if Biden wins.

Regarding Australia/US relations, Satloff said, ‘Biden and the people around Biden have an appreciation for America’s traditional alliances, and a desire to invest in those, and a belief that those alliances are the best way to preserve our interests … I can only imagine that the natural instinct of a President Biden is to deepen the relationship with Australia.’

Should Kamala Harris become president, Satloff said, she would be unlikely to significantly change what he expects from Biden. He also doesn’t expect Biden to adopt the views on Israel of the left of the party as a sop to that wing, stating that the left has other higher priorities.

On Turkey, Satloff said that its President Erdogan is less likely to have the ‘buddy-buddy friend in the Oval Office in Joe Biden that he’s had with Donald Trump.’ He noted that the Turks had been helpful allies to the US in some areas, but ‘extremely problematic’ in others, including, ‘where they’re trying to expand their influence, whether it’s in northern Lebanon or in al-Aqsa Mosque, and trying to steal a march on the Jordanians there, and their support for Hamas and the Muslim Brotherhood and all that sort of thing’.

He added that there will be an effort under Biden to have Turkey be more constructive and less problematic, and ‘there will be much less sufferance for the kinds of games that Erdogan has played in the last few years.’

He expects that under Biden, Israel will have similar leeway as now to quietly prevent Iran arming Hezbollah and setting up missile sites in Syria, as long as innocents aren’t killed.

A Secretary of State under Biden could be a politician who reflects the will of the president, as John Kerry was under Obama, or a highly professional diplomat. Possible candidates include Senator Chris Coons, who is close to Biden and served on the Senate Foreign Relations Committee, or Bill Burns or Tony Blinken, both former Deputy Secretaries of State, Satloff suggested.