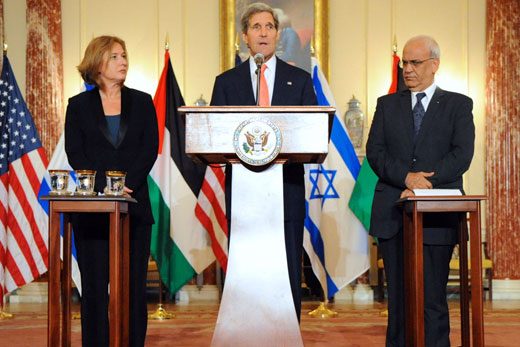 Was Israel’s attempt to resolve its dispute with the Palestinians through bilateral negotiations with the PLO doomed from the outset, or can talks finally succeed twenty years after the signing of the Oslo Accords?

The grim expression on Yitzhak Rabin’s face when shaking Yasser Arafat’s hand at the signing of the Oslo Accords was telling.

Rabin would have preferred a deal that cut out Arafat, but he urgently wanted progress, and the secret understandings hammered out by his foreign minister Shimon Peres with the PLO in Oslo were the only game in town. He knew that the Palestinian population was growing rapidly, posing a demographic threat to Israel’s democracy and the risk of renewed violence. He saw the importance of peace with pro-Western Arab states in the face of growing threats from radical states including Iran. He knew this opportunity might not come back. So he took the risk despite deep reservations.

The Accords were meant to last five years, until the conclusion of a final status agreement. Two decades later, Israelis are watching with wariness the fourth attempt to broker that agreement.

Peres maintains that Oslo was a necessary step towards resolution of the conflict based on two states for two peoples, an outcome that is essential to Israel’s future as a Jewish majority state. His opponents argue it was a misconceived initiative which papered over unbridgeable gaps and led to unprecedented waves of terrorism and violence against Israel.

In his ninetieth year Peres is regarded with broad affection in Israel, but his defence of Oslo runs against popular scepticism. Israelis are more preoccupied with making ends meet, and with alarming regional security threats, than with another round of peace talks that the Palestinians do not seem interested in anyway, and that seem destined to achieve no more than the last round.

It is hard for Tzipi Livni, the effective leader of the peace camp, to muster public enthusiasm for territorial concessions when most Israelis have experienced air raid sirens triggered by rockets from south Lebanon and the Gaza Strip, and remember the fear of the suicide bombers in the years of the Second Intifada.

The Israeli public have internalised a harsh lesson from the last 20 years. Giving up land does not guarantee peace or security. And today, pro-peace Israeli politicians have to make an even tougher sell – that land be given up for the even less tangible reward of ongoing legitimacy as a Jewish and democratic state.

There is a chink in this wall of Israeli scepticism, however. Ask Israelis if they believe a deal is possible and most say no, but ask if they favour on-going talks, and would vote for a two-state deal in a referendum, and they say yes.

Israelis have moved a very long way in twenty years towards acceptance in principle of the Palestinian demand for a state, a position that was unmentionable for Rabin and Peres even as they were signing Oslo. This support has not waned in the last ten years, despite intense rounds of violence and the failure of peace efforts. The reason, according to a recent study by the Institute for National Security Studies, is that Jewish Israelis value maintaining a Jewish majority to a far greater extent than maintaining Greater Israel.

What’s more, many policy analysts, diplomats, security experts and business leaders show the sense of urgency that seems to be lacking in the general public. There is a widespread feeling among policy elites that the cost to Israel of continuing the status quo will only increase, regardless of who is to blame for the stalemate. When, earlier this year, pro-settlement cabinet minister Naftali Bennett inelegantly compared the Palestinian issue to a piece of shrapnel in the buttocks, which one should get used to, rather than attempt to remove at risk of causing more damage, he was pressing back against these voices of concern.

And these concerns are reflected in Netanyahu’s own shifting rhetoric. When he first accepted the idea of a Palestinian state in 2009 he did so reluctantly. Today, he talks about two parallel strategic goals: preventing the creation of a bi-national state ‘that would endanger the future of the Jewish state’ and preventing the establishment of ‘an additional Iranian-sponsored terrorist state on Israel’s borders.’ Netanyahu currently faces no serious rivals for leadership of the country and could carry the public. A critical and unanswered question is whether he feels the urgency that drove Rabin in 1993.

Where are the Palestinians?

But even if the Prime Minister is willing to make the kinds of concessions proposed by Ehud Olmert in 2008, concluding the process that Oslo started means the Palestinians facing the necessary compromises on borders and refugees that they have avoided
until now.

Recent Palestinian behaviour has not been encouraging. In 1993 Arafat was desperate for a way into a diplomatic process from which he had been previously excluded. Though Palestinian President Mahmoud Abbas rejects the path of violence which Arafat embraced, he had to be dragged to the table with Netanyahu. The Palestinian Authority’s readiness to compromise, with the Palestinians internally divided and their Islamist rivals Hamas looking on, is in doubt.

However, the status quo offers little to the Palestinians either. Lately, Abbas has preferred seeking international recognition of the Palestinian state, rather than trying to negotiate its creation with Netanyahu. Real self-determination, however, cannot be created by UN resolutions, but only by Israeli withdrawal from the territories. Only time will tell if Abbas’s search for a legacy will carry him the extra miles to conclude the process.

With no success in this round of talks, Israel could find itself caught between its interest in partition and the inability to find an agreed basis for it. Israel has been there before. Whilst September marks twenty years from Oslo, December marks ten years from the Ariel Sharon’s dramatic decision to withdraw unilaterally from the Gaza Strip, implemented in 2005.

The rise of Hamas in Gaza helped destroy the credibility of the unilateral option. But if the negotiated route does not bear fruit, increasing numbers among Israel’s policy elite are asking whether the threat of a bi-national state is urgent enough to warrant the political and security risk of a return to unilateralism.

By Einat Wilf
For the sake of peace, reform of the United Nations Relief and Works Agency (UNRWA)... Read more > Autumn 2013

By Hitham Kayali
The one-state solution is a mirage. Only the two state solution can meet the national... Read more > Autumn 2013

By Gerald M. Steinberg
Will the new partnership between the Board of Deputies of British Jews and Oxfam challenge... Read more > Autumn 2013