by Ahron Bregman
BACK 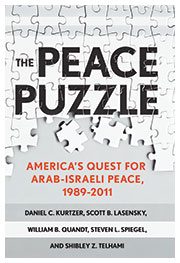 A series of revolutions over the last two years – the so-called ‘Arab Spring’ – has created a new reality for peace-making in the region. New governments pay far more attention to Arab public attitudes – including Islamist ones – than the autocratic regimes that they have replaced. This has meant countries once seen as reliable US allies, such as Egypt, have taken a noticeably cooler, or even openly hostile attitude toward the United States; this of course would turn any American diplomatic effort to promote an Arab-Israeli peace process into a much more difficult exercise. And always in the background are the lessons learnt from previous American mediation efforts, notably those of Bill Clinton, who devoted much of his presidency to promoting peace in the Middle East, and had his fingers burnt as a result. It is sufficient to read Clinton’s description in My Life of his last telephone conversation with Palestinian leader Yasser Arafat to realise the depth of his frustration: as Clinton put it, ‘Arafat thanked me for all my peace efforts and told me what a great man I was.’ Mr Chairman’, I replied, ‘I’m not a great man. I am a failure, and you have made me one’.

In 2006, Daniel Kurtzer, a former American diplomat who served as ambassador to both Egypt and Israel, led a study group on Arab-Israeli peace making in order to examine and assess the role of the United States in attempting to achieve a lasting Arab-Israeli peace, and to develop a set of ‘best practices’ for future American diplomacy. The group conducted interviews with more than 120 policymakers, diplomats, academics and civil society figures, and the story of their efforts, and indeed the lessons we may learn from them, are the basis of this illuminating book, The Peace Puzzle: American’s quest for Arab-Israeli Peace from 1989-2011.

There are chapters on US peace efforts during the Clinton tenure, including an assessment of the approach taken then to try and sort out the Israeli-Syrian conflict first before turning to the Palestinian front; on the 2000 Camp David summit and its collapse; on peace efforts during President George W. Bush; and even some preliminary observations about the peace process approach of the Obama administration.

I find the self-criticism expressed in this book quite astonishing, particularly given that some of the study group’s participants are themselves former diplomats who were involved at the time. ‘We are astounded by America’s poor performance’, the writers say and add, ‘had there not been the prior moments of success for US leadership in peace diplomacy, we might have concluded this book with the sad observation that the challenge is simply too great for our presidents and diplomats’.

Well, this is an exaggeration, as so much has been achieved over the years in sorting out the Israeli-Arab conflict, particularly since the 1991 Madrid Conference, and much of it thanks to successful American diplomatic efforts. What we are facing now is nothing but the endgame where the so called ‘core issues’ of the conflict – the final status of Jerusalem, the right of return for Palestinian refugees, the precise demarcation of borders and so on – are on the negotiation table. Dealing with these issues is no easy matter and no American trick could sort it out overnight, certainly not before the parties themselves decide to tackle these issues head-on.

Having said that, what Washington could do in the coming years to promote Arab-Israeli peace is to act on one of the lessons proposed by the authors in their section Lessons Learned and Unlearned: ‘Both Israelis and Palestinians’, they say, ‘need coddling’, by which Kurtzer & Co. no doubt mean American financial, diplomatic and other forms of support (such as the privileged supply of advanced military technologies to Israel) that could smooth the process, making it worthwhile for the parties to be more forthcoming and to compromise. I would perhaps qualify this important lesson by adding that the Israelis need more ‘coddling’ than the Palestinians. After all, the Israelis are the ones who would be required to provide the tangible assets – the land, water and perhaps even to divide Jerusalem and allow some Palestinian refugees to return to Israel proper – whereas all the Palestinians could offer is promises – mere words.

US diplomacy will continue to play a critical role in Middle Eastern peace-making. American diplomats should pick up this superb study to learn from it the lessons of both past successes and failures in American Middle East peace-making diplomacy. If they do, when the time comes for them to swing back into action, they may find themselves better able to avoid the pitfalls, and maybe even to facilitate a breakthrough.

By Meir Kraus
The Arab League decision to create a $1bn fund to ‘maintain the Arab and Islamic... Read more > Summer 2013

By Hussein Ibish
Salam Fayyad’s institution-building program remains the only policy available to lay the groundwork for a... Read more > Summer 2013

By Israel Bartal
Shlomo Sand’s political treatise, The Invention of the Land of Israel, is another link in... Read more > Summer 2013

By Ben Cohen
Amid the fanfare about the interim agreement reached in Geneva in November 2013 over Iran’s... Read more > Summer 2013