Fathom > Autumn 2013 > Women, the Wall and the Struggle for Jewish Pluralism in Israel

Women, the Wall and the Struggle for Jewish Pluralism in Israel 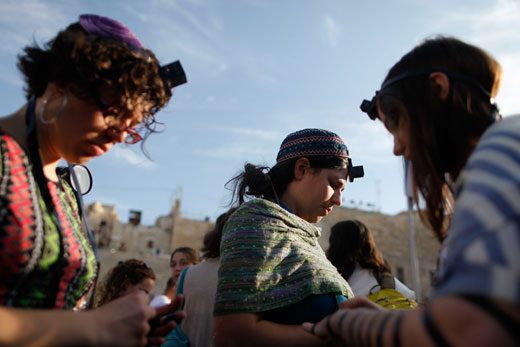 Members of the liberal Jewish religious group Women of the Wall wear ‘Tallit’, the traditional Jewish prayer shawls for men, as they pray at the Western Wall in Jerusalem's Old City on May 10 2013. Flash90.

Women of the Wall has been challenging Orthodox religious authorities for over 25 years by praying at the Western Wall (Kotel), Israel’s holiest Jewish site, with tallitot (prayer shawls) and Torah scrolls, activities reserved for men in some Orthodox traditions. Director of the Israel Religious Action Centre Noa Sattath, places this issue in the wider context of Jewish pluralism in Israel, and suggests why finally, progressive Jews may achieve the right to worship as they please at the Western Wall.

Backs to the Wall

The issue of women’s prayer at the Western Wall has become an acute crisis generating national and international attention. Over thirty women have been detained in the past two years in confrontations between Israeli police and prominent Rabbis, Knesset Members, and other Jewish communal leaders from Israel and the Diaspora.

Until very recently, for women to wrap themselves in tallitot(prayer shawls) and pray out loud in Judaism’s holiest site was interpreted as ‘conducting a religious ceremony that offends the feelings of others,’ a violation of the ‘Regulation of the Holy Places’ and punishable by up to a year in prison. A landmark court ruling in April overturned this interpretation of the regulation and since then arrests have stopped, though restrictions remain in place, and protests and harassment from some ultra-Orthodox worshippers continue.

The harsh police treatment of activists from Women of the Wall is generating passionate debate across the Jewish world about diversity, religion, women and equality. The fact that an all-male rabbinate is restricting women’s prayer is an expression of a wider struggle for Jewish pluralism in Israel.

While the Israeli Declaration of Independence guarantees freedom of religion to all Israeli citizens, official policy has yet to recognise the diversity of Jewish practice. The Western Wall, like almost all religious sites and services in Israel, is governed by an Orthodox administration with a narrow view of Jewish practice.

The monopoly that Orthodox rabbinic authorities have over most Jewish practice in Israel has its roots in the British Mandate. The main enforcer of the Orthodox monopoly is the Chief Rabbinate, an institution envisioned by Herbert Samuel, the first British High Commissioner of Palestine. To protect the religious freedom of Jews under British rule, he established a body to represent Jewish religious interests and exercise autonomy concerning religious issues, led by two Chief Rabbis, one Ashkenazi and one Sephardi. This method of ethnic division is no longer legal in any other Israeli government body, but it persists in the rabbinate.

After the establishment of the state, through political negotiations between the largely secular Zionist leadership, and the ultra-Orthodox community, the Chief Rabbinate was codified into Israeli law and given the sole authority on personal status and religious issues for Jews in Israel. Similar religious institutions were established for other recognised religions, including Muslims and Christians. Non-Orthodox forms of Judaism, such as the Reform and Conservative streams which are popular around the world, were not recognised by the new state. The end result of importing this institution from the Mandate into the modern State of Israel has been the restriction of religious freedom for non-Orthodox Jews.

This touches the lives of ordinary Israeli Jews most prominently when it comes to marriage. Most Jewish Israelis are secular, but Orthodox Jewish marriages are the only option for them in Israel. Whilst marriages under other recognised religions are recognised, there is no civil marriage option, and the marriage customs of non-Orthodox Jewish denominations are not recognised.

This also forces people of different faiths who wish to marry to do so overseas, after which their marriage is recognised in Israeli law. A similar system exists in Lebanon, which means many Israelis have the odd experience of waiting in line in Cyprus to get married at City Hall, next to couples from Beirut.

The problem is exacerbated in divorce, which must also take place in the religious courts, even if the couple was married abroad. Jewish religious courts do not view women as equal, and women are not even allowed to act as witnesses. It is impossible for a woman to get a divorce in the Jewish courts without a get, and this religious divorce document can only be granted by the soon to be ex-husband. The man could be abusive, living with another woman, or completely absent, and yet the woman is not granted a divorce without his express permission. There are legal ways to put pressure on the husband but no way to force him to grant a get. There are even men serving time in Israeli prisons for not granting a get, but their wives are still married to them.

This court system stands in direct contradiction with the rest of the Israeli judicial system, which promotes equality for women, applies family law based on the interests of the child, and is broadly a protector of Israeli democracy. For decades, a majority of the Israeli public has favoured change, but small religious parties have used their power in coalition governments to prevent this, keeping Israel’s laws governing marriage and divorce stuck in the 18th century.

The institution of the Chief Rabbinate itself is accused of both inefficiency and corruption. It is illegal for a business to present itself as selling kosher food unless they are approved by the Chief Rabbinate. The rabbinate can over-charge for inspection, mandate working with specific suppliers while banning others, and try to influence the content of events in hotels, wedding halls and restaurants beyond inspection of the food.

The rabbinate is infused with nepotism. In the elections for the Chief Rabbi held this summer, three of the four contenders (and both winners) were sons of former Chief Rabbis. Rabbi Yona Metzger, who just stepped down from the Chief Rabbi position, is under investigation for fraud and corruption.

The conflict at the Western Wall is rooted in a wider struggle in Israel between those seeking to challenge the position of the ultra-Orthodox and promote religious diversity and those preserving the existing structure.

In 1988 the government granted supervisory rights at the Western Wall to the Western Wall Heritage Fund, a body controlled by ultra-Orthodox rabbis. Under their supervision, the Western Wall plaza is divided into two prayer spaces, 80 per cent of the area for men, 20 per cent for women, and only Orthodox prayer customs are permitted.

The Israel Religious Action Center (IRAC), representing the Reform stream of Judaism in Israel, which is egalitarian, has been advocating a new arrangement. This would be a division into three sections: one for men, one for women, and a mixed section, which would allow for diverse religious practices.

Following the public outcry over the arrest and harassment of women trying to pray at the wall, Prime Minister Netanyahu nominated Natan Sharansky, chairperson of the Jewish Agency and a former minister, to propose solutions. Sharansky, revered due to his background as a political prisoner in the Soviet Union and a symbol for Jewish freedom of identity, managed to convene Jewish leaders from across the religious spectrum.

He came up with an innovative solution to expand the existing Western Wall plaza, allocating an equal section for pluralistic Jewish practice. For the first time there would also be one government body representing all streams of Judaism and facilitating different forms of Jewish practice at the site.

This apparently simple change offers a radical vision for the wider issue of Jewish pluralism in Israel. Israelis approaching the Western Wall will see two entrances, offering different types of Jewish religious practice, one traditional and one progressive.

However, the future for this vision, embraced by Jewish leaders around the world, is now in doubt. After the Sharansky plan was publicised and received wide support, Netanyahu nominated another committee led by Cabinet Secretary Avichai Mandelblit, to come up with a proposal. Whether this was a stalling tactic or an attempt to water down the proposals in the face of ultra-Orthodox pressure, remains to be seen.

A moment for change?

The main barrier to progress on all issues of religion and state has been the political structure in Israel. All Israeli governments are built on coalition politics and are fragile. Ultra-Orthodox parties, which have been members of almost all Israeli governments since the founding of the state, have used their extraordinary influence to prevent change. However, the current government is only the second in Israel’s history with no ultra-Orthodox parties. The new Yesh Atid party, a senior member of the coalition, was elected on the promise of changing the relationship between the ultra-Orthodox community and the state, and though the focus of its agenda so far has been ending the ultra-Orthodox exemption from military service and bringing essential secular studies into ultra-Orthodox schools, there is hope that the issue of marriage will be on the upcoming Knesset agenda.

With ultra-Orthodox parties excluded from government, and a determined constituency willing to challenge their status, there is unprecedented optimism about the cause of Jewish pluralism, not only at the Western Wall, but throughout Israel.

By Yair Raveh
Israeli cinema has been more mainstream and gay than subversive and queer. But that may... Read more > Autumn 2013