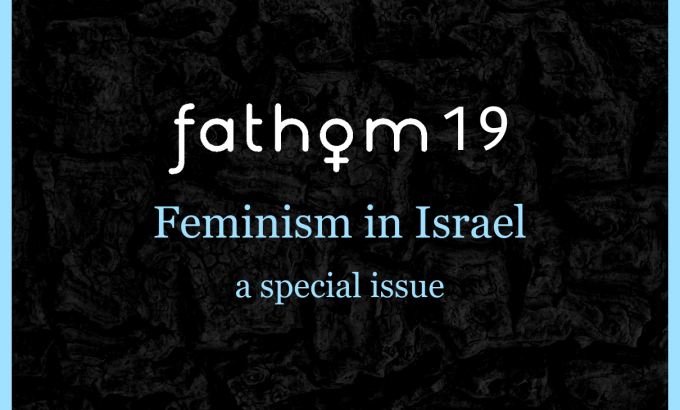 Feminism in Israel is a special issue of Fathom journal that brings together the voices of 22 women from across Israeli society. Secular and religious, academic and activist, Jewish and Arab, Israeli and Palestinian, together they offer a new map of women’s experience in contemporary Israel, and new insights into the changing structures of oppression women face today, the patterns of resistance they have developed to fight for equality in the Knesset and in civil society, the distinctive role played by women in the promotion of peacebuilding and a shared society, and the present state and future potential of Israeli feminism.

Three framing essays open the collection. Dahlia Scheindlin asks if the forward march of women in Israel has been halted, noting the profound challenge to feminism posed by a resurgent religiosity that rejects women’s equality, while Einat Wilf unearths the surprising affinities of anti-feminism and anti-Zionism. Elham Manea addresses two central obstacles to women’s equality in the Arab and Muslim world: authoritarian governance and Islamist ideology. She also reflects critically on ͚the failure of many western progressives, including many western feminists, to support oppressed Arab and Muslim women.

Embodying the refusal to accept any reversal of equality for Israeli women are Aliza Lavie MK, Chairwoman of the Knesset Subcommittee on Trafficking and Prostitution, and Rachel Azaria MK, of Kulanu. Both detail their involvement in ongoing reform fights within the Knesset. Their determination is matched in the sphere of civil society by many of our contributors, including the young activists of Darkenu: Israel’s Moderate Majority.

The distinctive role of women in peacebuilding is examined in several essays and interviews. Rabbanit Tirza Kelman reflects on the recent visit by national-religious leaders to Northern Ireland and the lessons she drew from that peace process for peacebuilding between Israelis and Palestinians. Sarai Aharoni  ciritically evaluates the much-discussed ‘women and peace hypothesis’. She also offers a detailed and critical analysis of the high hopes invested in UN resolution 325 to engender Israeli-Palestinian peacemaking efforts, and the rather disappointing results.

The shifting patterns of women’s inclusion and exclusion from the Israeli public square is the bitterly contested subject addressed by Miriam Zalkind and Michal Gera Margaliot of the Israeli Women’s Network. Yofi Tirosh also raises the alarm about the threat to equality from religiously inspired sex-segregation in Israel’s public institutions. Rachel Tevet Vizel, ‘gender advisor’ to the IDF Chief of Staff from 2011 to 2017, addresses these concerns. She sets out first the dilemmas – how to successfully integrate women into the IDF at the same time as the national-Religious and ultra-Orthodox conscripts, and how to attend to the imperative of equal-opportunity as well as the imperative of winning wars – before defending the coherence and balance of the resulting middle way, as embodied in the Joint-Service Ordinance she helped to draft.

Different kinds of challenges to the unequal position of women within strands of Orthodoxy are set out. Elana Maryles Sztokman, author of The War on Women in Israel: A Story of Religious Radicalism and the Women Fighting for Freedom, and the former Executive Director of the Jewish Orthodox Feminist Alliance contributes a sparkling personal essay about her decision to leave Orthodoxy and train as a Reform Rabbi. Pnina Pfeuffer, a Haredi feminist, sets out how the combination of rapid social, economic and cultural change in Israel, as well as the revolution of the internet and social media, are beginning to create openings for the emergence of a new and exciting Haredi feminism.

Arab and Palestinian perspectives are not neglected. Fida Nara and Sarit Larry of Mahapach-Taghir, a feminist Jewish-Palestinian organisation, set out the organisation’s unique and truly innovative blend of critical pedagogy, feminism and Jewish-Palestinian partnership for social justice. Palestinian-Israeli Samah Salaime of Arab Women in the Center (Na’am in Arabic) maps the causes of the appalling gender-based violence against Arab women in Israel, and suggests the changes needed to combat it, from a revolution in Israeli state policy and practice to a cultural revolution in Arab society. West Banker Huda Abu Arqoub, Director of the Alliance for Middle East Peace (ALLMEP) and a leading supporter of Women Wage Peace, spoke to the editors about the challenges faced by a Palestinian feminist engaged in conflict-resolution activism.