by Jane Ashworth
BACK 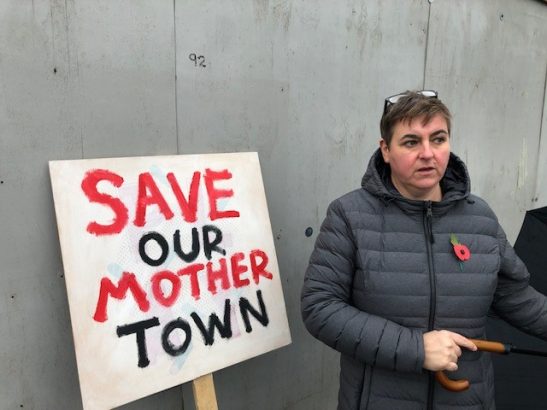 Jane Ashworth is a Labour councillor in Stoke and the co-founder of Engage, the anti-racist campaign against left antisemitism. She assesses why Labour lost Stoke-on-Trent North, since 2015 the seat of the parliamentary chair of the Jewish Labour Movement, Ruth Smeeth.

Despite local Labour’s full-on campaign and a healthy contact rate, it wasn’t possible to hold onto the seat of Stoke-on-Trent North and Kidsgrove. Well known Labour Zionist, Ruth Smeeth, was a casualty of Labour’s bad odour. 6,000 fewer people voted Labour than in 2017. Our vote went down to 14,688 from 21,272; a drop in vote share of 14.3 per cent, albeit on a smaller turnout. Ruth Smeeth commented bitterly on the night, ‘Jeremy Corbyn has nearly broken our party’.

On the doorstep, even experienced canvassers could not find a way to overcome the distrust of Corbyn as a man and as a leader. Add in the equally strongly held view that Parliament had obstructed the democratic will of the people to leave the EU and this was a result waiting to happen.

Labour’s anti-semitism problem was seldom mentioned as an issue in its own right. It was one more item on people’s long list of complaints which they thought showed Corbyn to be not just a wet and weak vacillator, unable to run his party let alone the country, but also a wrong ‘un.  With the sole exception of a couple who are fully-blown conspiracy theorists, I heard no-one on the doorstep claim that the Jews are trying it on or otherwise ascribe bad faith to Ruth.

Brexit aside, very few voters complained about Ruth Smeeth’s performance as an MP. In fact, canvassers often heard a pro-Ruth sentiment mixed-in with anti-Corbyn vitriol. Respect for Ruth and her welfare rights team was one of the reasons we held onto two-thirds of our vote.

Though each town is unique, the key context of any election fought in Britain’s left-behind towns is the same: decay and demoralisation. Both are acute in Stoke North. Stoke-on-Trent is a city of 6 towns, each with its own character. Burslem town is the heart of the North constituency; it was once the centre of ceramics where world famous brands like Royal Doulton and Burleigh employed thousands of skilled workers. The town has lost most of these pot-banks and now people work in warehouses or in small businesses or as carers.  The frontage of a Primitive Methodist chapel still stands – just about; there are memorials to the local Chartists. Arnold Bennett lived here and his novels of the Potteries are set in Burslem. 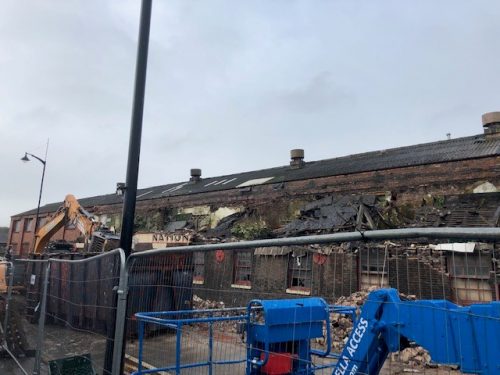 Photo: A neglected teapot factory fell down in November and had to be partly demolished. It was a listed building. Photo courtesy of author.

The grand historic buildings on the now-dead high street that once housed pioneers of the industrial revolution, like Josiah Wedgwood, Erasmus Darwin and James Brindley, have been left to rot by absentee landlords who seem to have neither the intention nor resources to bring them into use. Locally, it’s known as ‘vandalism by neglect’. The decay of these buildings does not just visibly represent the decline of the town, they offend residents’ sense of right and wrong. Labour did not present a credible way out of our malaise. People feel abandoned because they have been abandoned.

Labour’s overcrowded and apparently very expensive manifesto did not speak to local concerns.  People thought the promises would grow their tax bill and create an unstable economy, neither of which they can afford. Some manifesto proposals seemed pie-in-the-sky. When you and yours work a 50 hour week on the minimum wage, the idea of a four-day week doesn’t feel like the redemption train; it feels plain daft.

As Lisa Nandy MP, who represents a similarly left-behind town in Northern England, Wigan, wrote in The Guardian in the aftermath of the defeat that some Labour policies made ‘little sense’ in these towns:

Nationalising rail is a good, sound policy but should we have staked so much of our campaign on that policy when so many of the towns we lost have no train station and rely on buses anyway? Should we really be rejecting nuclear power when it is one of the best sources of good jobs outside London? What is the point of a minimum income guarantee if you have to stack shelves for the rest of your life and want something more, or a big offer on tuition fees if you can’t see a way of getting through college?

More important even than the problems of the manifesto was Labour’s devastating dislocation from Stoke’s ‘traditional’ working class. We clashed with the values of traditional Labour voters. We lost because voters no longer trusted our values. Manifesto promises alone, however well communicated, will not bridge that gap.  Policies come and go: with a strong value alignment the party may have been forgiven for policy and personnel errors.  Round here, the values have more in common with trade unionism than with Corbynism. People want their covenant with the British state honoured. They will work hard, play fair and in return, they expect the state to look after them. They want a strong leader who does not vacillate and helps them to work hard and ‘get on’. They respect their family members who have served in the forces whereas Labour, especially its leader, seemed to be hostile to them and theirs. (John Burton, Tony Blair’s agent in Sedgefield, a former mining constituency in North East England, reported this was a factor in the loss of that seat too.) Critically, they have democratic values too: it is taken as given that the will of the people, as shown in the referendum, must be considered precious.

Len McCluskey, the leader of the Unite trade union, the largest in the UK, put his finger on the problem after the election: ‘As important as it is, too often, Labour addresses the metropolitan wing of its electoral coalition in terms of values – openness, tolerance, human rights – and the ‘traditional’ working-class wing simply in terms of a material offer, as if their constituencies did not have their own values of solidarity and community. That must change.’ (Astonishingly, McCluskey also criticised Corbyn for his mishandling of antisemitism in the party: rich indeed given his own insistence for four years that the charge of anti-Semitism was a smear to undermine ‘Jeremy’.)

Corbyn’s party was viewed by many in Stoke-on-Trent as too far away from those traditional labour movement values to vote for. That Boris was able to lie, cheat and hide in a fridge whilst still positioning himself as something closer to that ideal than Labour tells us much more about Corbyn and Corbynism than about Boris.