In April 1949, what was then the New Statesman and Nation — at the time aligned with the left of the Labour Party under the stewardship of Kingsley Martin — came out against the internationalisation of Jerusalem as a ‘quite impracticable’ scheme. The 1937 Peel Commission had called for an enclave whose borders would encompass Lod, Ramla, Bethlehem, and Jerusalem, while the November 1947 United Nations Partition Plan for Palestine envisaged Jerusalem, Bethlehem, and their environs under an international trusteeship administered by a UN governor — a corpus separatum in the middle of Mandatory Palestine.

In spite of its inherent unworkability, David Ben-Gurion accepted the Partition Plan, including Jerusalem’s internationalisation. The Arab states did not, the rest is history, and a Jerusalem as a UN governorate became a proposal whose implementation would never come to pass. In March 1949, Israeli troops reached Eilat, and a month later, an armistice agreement with Transjordan drew a Green Line down the middle of Jerusalem. In light of these developments, the New Statesman and Nation decreed the ‘sensible solution’ for the city would be for Jerusalem to ‘become the capital of both Israel and Transjordan, the new city going to the Jews and the Old City to the Arabs’.

Some version of this — West Jerusalem to Israel; East Jerusalem to Palestine — is now a commonplace view, yet the Partition Plan formed and still forms the basis for many within the international community’s legal stance towards Jerusalem. UN Resolution 194 (1948) called for Jerusalem to be demilitarised, ‘accorded special and separate treatment from the rest of Palestine,’ and ‘placed under effective United Nations control’. The UN condemned subsequent unilateral changes to the status of Jerusalem: in Resolution 242 (1967) following Israel’s post-Six Day War occupation of East Jerusalem; and in Resolutions 476 and 478 (1980), adopted after Israel’s de facto annexation of Jerusalem’s eastern neighbourhoods to create a single municipality.

The notion of a corpus separatum continues to inform European diplomatic policy to some extent. It was the basis of a diplomatic spat between Israel and the European Union in March 1999, when EU officials met their Palestinian counterparts at Orient House, then the Palestine Liberation Organisation’s Jerusalem headquarters, contrary to Israel’s objections. Jerusalem, the EU asserted, is an international city; unilateral changes to its borders and sovereignty would not be recognised. Today, the EU’s official position is that ‘Jerusalem will be the future capital of two states, and will become an open city with access for Israelis, Palestinians and the rest of the world’.

Though no longer party to Europe’s common foreign policy, Britain like the EU’s member states houses its embassy in Tel Aviv and finds itself in a similar diplomatic position. Since 1950, Britain has ‘withheld recognition of sovereignty over Jerusalem pending a final determination of its status’. As such, Britain only recognises Israel’s ‘de facto authority over West Jerusalem’. Jerusalem’s final status ‘should be determined in a negotiated settlement between the Israelis and the Palestinians, and Jerusalem should ultimately be the shared capital of the Israeli and Palestinian states’.

Whether via trade, scientific, and cultural cooperation agreements with Israel or by being the single largest donor of foreign aid to the Palestinians, Europe has long aspired to play a larger role in the Middle East peace process. Its diplomatic efforts via membership of the Quartet, however, have not borne much fruit. Germany’s Greens — who will likely form part of the next German government, either as a senior or junior partner — now believe shifting alliances in the region offer an opportunity to jumpstart multilateral negotiations towards a two-state solution with EU and US involvement.

To realise that ambition, Europe’s powers would need to do something about its outdated policy on Jerusalem. The EU adheres to a certain international consensus, refraining from prejudicing negotiations between Israel and the Palestinians. But those negotiations were already prejudiced in December 2017 when Donald Trump recognised Jerusalem as Israel’s capital and, the following year, relocated America’s embassy there. The Trump administration also expended diplomatic capital encouraging other states to move to Jerusalem — including in situations where it had nothing to do with the matter at hand like an economic settlement between Serbia and Kosovo. Trump has gone; the embassy remains.

The two parties, meanwhile, have in their own way already determined the final status of Jerusalem. As David Ben-Gurion told the Knesset in December 1949, ‘for the State of Israel there has always been and always will be one capital only”. Seat of its prime minister and president, parliament and Supreme Court, Jerusalem is the capital of Israel. The Palestinians, meanwhile, view Jerusalem as their capital, and as recently as last year, Palestinian Authority President Mahmoud Abbas restated that there will not be a Palestinian state without it.

Europe’s current position on Jerusalem, then, feels anachronistic. If it is the view of the EU and UK that Jerusalem should be the shared capital in some form of both Israel and a future Palestinian state, then its official stance towards Jerusalem should keep up with that ambition. Unlike the US, however, Europe should do this in a way that is fair to both sides of the argument, does not sow distrust with one party or the other, and does not make a determination about what precisely constitutes Jerusalem.

With one hand, the UK in concord with the EU and its member states should recognise Jerusalem as the capital of Israel and begin preparations for relocating their embassies there. With the other, they should recognise the State of Palestine — something only 9 of the EU’s 27 members have done — with Jerusalem as its capital. Countries and institutions with existing representation in Ramallah should change their accreditation from the PA or PLO to the State of Palestine, while those without representation in Ramallah should establish one, while again laying the groundwork for a future embassy in Jerusalem.

Never have talks between Israel and the Palestinian over a two-state solution felt more remote but been more urgent. But jumpstarting negotiations may require an outside force to make a paradigm-shifting move. Now is not the moment to lean on resolutions long past their use-by date. Jerusalem is or will be the capital of Israel and Palestine; any other solution is quite impracticable. The time is ripe for the EU and UK to recognise it. 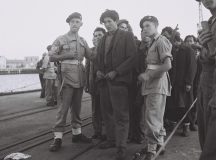 By Meir Kraus
The Arab League decision to create a $1bn fund to ‘maintain the Arab and Islamic... Read more > June 2021 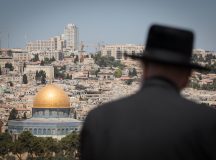 Jerusalem: the contours of a possible agreement

By Meir Kraus
Meir Kraus was the head of the Jerusalem Institute for Policy Research between 2009-2016 and... Read more > June 2021