Fathom > November 2018 > British Jews and Israel – how is the relationship evolving? | Editorial

British Jews and Israel – how is the relationship evolving? | Editorial 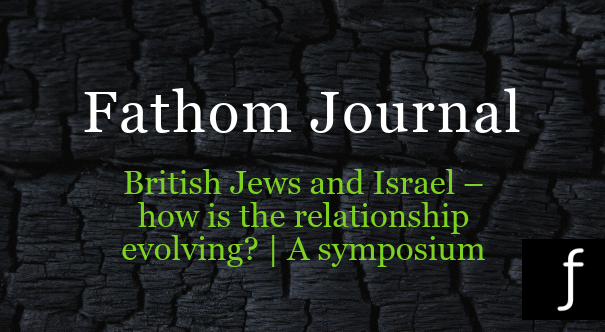 In July 2018, the Jewish Chronicle identified ‘fundamental questions which must now be urgently asked’ in light of what it termed the ‘potentially seismic change’ in relations between British Jews and Israel. The editorial cited as examples the open letter signed by 100 leaders and graduates of mainstream left-wing Zionist movements, asserting that ‘ending the occupation … is a principle of our Zionism’ and the group of young British Jews who said ‘Kaddish for Gaza’ in Parliament Square.

The Fathom editors believe that the journal can provide a useful platform for this ongoing debate. The ethos of Fathom is to provide a space for writers with very different views to make their case and stimulate further debate. In light of this, we invited contributors from a variety of backgrounds to assess if there is indeed a ‘potentially seismic change’ in the way British Jews feel about Israel and the manner in which they discuss Israel. We asked if there is a ‘centre ground’ for British Jews on Israel; what forms of criticism of and engagement with Israel are acceptable and effective; and if British Jews have a responsibility to avoid helping those who wish to demonise Israel. Our list of writers is not intended to be exhaustive, and though our contributors represent a range of views we do not claim to have represented all views. What we do hope is that those interested in this debate will read each essay carefully in order that they can better understand those with views very different from their own.

Relating to developments in the British Jewish Community, Mick Davis, the Former Chairman of the Jewish Leadership Council, argues that the current communal discourse is ‘now so polarised, vicious and impoverished that it constitutes a long-term existential threat to the community’ and that ‘many young Jews today across the Diaspora are confronting a dichotomy between their own (Jewish) values and the rhetoric and actions out of Israel. The result is alienation and if this continues or worsens then we face a fracturing of the Jewish People’.

Jonathan Hunter, a co-founder of the Pinsker Centre, identifies an ‘absence of a strong moral example from the Jewish community’s leadership’ which has left intellectually curious young people in the middle of a cross fire. ‘They are told to join one of two groups: either the growing ranks of the hard-left that is entirely devoted to constant criticism of Israeli policy, or alternatively to be a part of traditional Israeli advocacy which is totally averse to any criticism.’

Rabbi Laura Janner-Klausner, Senior Rabbi to Reform Judaism, emphasises the importance of engaging with younger members of the community who, while possessing ‘a perspective which is relevant and important’ are ‘increasingly wondering whether there is a place for them in this discussion’ and who are routinely ‘belittled, patronised and even verbally abused for expressing their views’.

Robin Moss, UJIA Director of Strategy (writing in a personal capacity), sets out how as the ‘Millennial’ generation takes on increasing positions of leadership within British Jewry, we see both seismic change and remarkable continuity. He points that on the one hand, young British Jews are overwhelmingly visiting Israel more often and ‘Israeli culture – food, TV, films, celebrities – is increasingly normalised within British and British-Jewish society’. Yet on the other hand, ‘many younger people want to replace and revolutionise – rather than repair – Jewish communal organisations’.

Dr Keith Kahn-Harris, a senior lecturer at Leo Baeck College and Fellow of the Institute for Jewish Policy Research, warns that the ability of often divided Diaspora communities to successfully manage their disagreements over Israel may soon end. ‘It is still possible to fight for a liberal Zionist future based on a two-state solution, just as it is possible to fight for the expansion and/or annexation of the occupied territories. But we are reaching decision time and I myself believe that the chances of liberal Zionism remaining a realisable vision are now extremely unlikely.’

The contributors also presented a spectrum of views about effective engagement with and criticism of Israel.

Hannah Weisfeld and Maya Ilany, Director and Deputy Director of Yachad, discuss the importance of demonstrating that being pro-Israel does not automatically mean supporting government policy and that ‘it is because we are willing to criticise the occupation and anti-liberal trends in Israel, as opposed to ignoring them, that we are able to win the argument in favour of Israel’.

Simon Gordon, who served as speechwriter to both Israeli Ambassador Daniel Taub and Douglas Carswell MP, believes that ‘if Jewish groups feel they must take issue with the Israeli government, they should at least do it behind closed doors,’ adding that ‘if the government is really their intended audience, writing to the Israeli Ambassador privately should serve the same purpose as issuing a press release or saying kaddish in Parliament Square’.

Tamara Berens, former President of Kings College Israel Society and a Campus Associate with CAMERA on Campus (writing in a personal capacity), believes that while ‘engagement with Israel on issues pertaining to Israeli society and/or religious freedoms and treatment of non-Orthodox Jews is a legitimate area for critique,’ she thinks that ‘those who have not served in the IDF cannot claim to have the insight or tangible experience necessary to comprehend the security challenges the state faces’.

Dr Toby Greene, Fathom Contributory Editor and co-author of ‘The Israelization of British Jewry: Between Home and Homeland,’ believes that British Jews often have to walk a fine line. ‘Jews who care about liberal values need, as far as possible, to oppose the entrenchment of the occupation as if there is no anti-Zionism and oppose anti-Zionism as if there is no entrenchment of the occupation.’ He suggests that the right to engage critically comes with some provisos, which include a deep and irrefutable commitment to Israel as the nation state of the Jewish people, a sensitivity to finding the most appropriate partners in Israel, grasping the real concerns and feelings of the Israeli mainstream, and engaging in genuine dialogue with those parts of Israeli society with which one disagrees.

Fathom sees these contributions as part of what needs to be an ongoing discussion within Anglo-Jewry and between Israelis and Jews in the Diaspora as a whole. We hope the readers find the contributions of interest and we welcome any written responses to the arguments published here.

Calev Ben-Dor, on behalf of the editors