by Matti Friedman
BACK 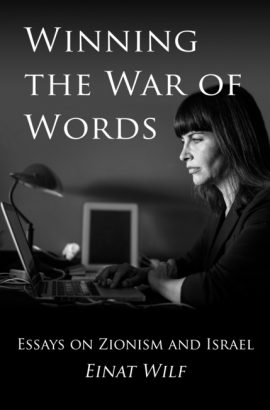 Einat Wilf’s book Winning the War of Words: Essays on Zionism and Israel is available on Amazon or to download as a PDF.

One problem for anyone trying to offer a defence of Israel in the face of the determined intellectual assault on the country in recent years is that while the assault is simple and easily understood – conducted in an adolescent emoji language of epithets and images – the defence is harder to explain. To defame the country one merely needs to say ‘colonialism’ or ‘apartheid’, and add a photo of a soldier manhandling a child. To defend Israel requires an understanding of at least 100 years of history in both Europe and the Middle East, of how we reached this moment, and of what Israel’s choices really are right now. Anyone trying to explain Israel’s case needs to be worldly enough to make sense to people outside the bubble of those who are reflexively sympathetic to Israel anyway, and it helps not to be ideologically rigid or so angry you can’t speak calmly.

Not many people can do this well. The confrontational and clumsy government currently in power in Israel, for example, doesn’t have much luck. One of the most skilful Israeli advocates right now is Einat Wilf, the scholar, Cambridge and Harvard graduate and former Knesset member who has become something of an unofficial roving ambassador for Israel in recent years. (Originally a Labour Party lawmaker, she joined a group of MKs who left the party along with former Prime Minister Ehud Barak for a brief stint in Benjamin Netanyahu’s coalition government, after which she left politics in 2013.)

In the collection Winning the War of Words, Wilf presents essays and articles that look at Israel, at the political offensive against Israel, and at the country’s place in the growing violence that surrounds it in the Middle East. Together, the pieces offer a thoughtful take on Israel’s current trials, and a spirited defence of the country’s basic rights in the face of the bizarre, fashionable, and growing international hostility to the state on 0.01 per cent of the world’s surface whose activities and very existence seems to be an affront to so many.

Wilf was born, she tells us, ‘into the Israeli left’, believing that ‘that the day that the Palestinians would have their own sovereign state would be the day when Israel would finally live in peace.’ Like many Israelis, she had her mind changed by the Palestinian rejection of Israeli peace offers and by their use of terrorism. She noticed, she writes, that what she had previously regarded as legitimate criticism of Israeli policies was in fact something different, an ideology disturbing in its tenor and content. She concluded that this criticism wasn’t about a two-state solution at all – indeed, that it ‘only very thinly masks a deep and visceral hatred for the state and its people that cannot be explained by mere criticism for the policies of some of its elected governments.’

Things move so far so fast in this region that some of the pieces here already seem like distant history just a year or two after being written. If Iran, Wilf wrote in 2013 as the nuclear negotiations progressed, ‘felt that the economic pressure and the credible threat of military intervention were to threaten its very survival, it might, just as Assad did with the chemical weapons, go as far as give up the entire nuclear program altogether.’ Ah, 2013 – it was an innocent time. Of course we know now that the West will never make such a threat, that the mullahs will have their way, and that the Americans are in retreat amid the confused ruins of their policies as the Russians move in.

Particularly sharp are Wilf’s views of the regional turmoil. Many in the West, she writes, were overly optimistic about how change in the Arab world will come about, having forgotten how Europe assumed its own current incarnation – it took, she writes, ‘two world wars, many regional wars, civil wars, massacres, genocide, Fascism, Nazism, Communism, dictatorships, and tyrannies that all had to be overcome and destroyed for human freedom and democracy to take hold.’ If Jews wandered in the desert for 40 years before reaching the Promised Land, she wrote in 2014, ‘the Arab world is now wandering in its own desert, undergoing its own misery. If the transformation takes only 40 years, we should all – peoples of the Middle East and the world– count ourselves lucky.’

The correct course for Israel amid all of this, Wilf believes, is scrupulous neutrality: not to intervene but instead to dig in and wait it out. ‘Switzerland managed to survive and prosper as a “neutral bunker” while Europe was torn apart by religious, sectarian, civil, national and world wars,’ she points out (though conceding that Israel lacks some of Switzerland’s assets, chiefly the Alps). Indeed, the country’s future currently depends on our ability to keep out the violence that is destroying the Islamic world around us, and Wilf’s bunker analogy is apt. Our bunker, however, isn’t particularly well-constructed, and it’s an open question how deep we can really dig in: the spate of Palestinian stabbing attacks on our streets in recent weeks have reminded us that there are enemies inside the bunker, and of course Hamas rockets have shown that we don’t have much of a roof.

In the articles dealing with Israel’s manoeuvrings with the Palestinians, Wilf devotes attention to the UN’s agency for Palestinian refugees (UNRWA) which she describes as one of the key drivers of the conflict. This international body has ensured, she writes, that instead of being absorbed in their host countries Palestinian refugees have not only been maintained as refugees for seven decades but have been multiplied many times over as a political weapon against Israel. ‘Whereas the actual number of Arabs who could still claim to be refugees as a result of the Arab-Israeli war of 1947-1949 is today no more than several tens of thousands’, Wilf informs us, ‘the number of those registered as refugees is reaching five million, with millions more claiming to have that status.’ In a different essay, written with Shany Mor, she analyzes the history of the territory called Palestine and urges Palestinians and their international supporters to specify exactly which ‘Palestine’ they support – ‘liberation Palestine’ or ‘elimination Palestine’, that is, a state alongside Israel or a state instead of Israel.

In my favourite piece here Wilf recounts a conversation with a Lebanese colleague, a Christian, who tells her, ‘We miss you’, meaning not that he misses her personally but that the Arab world misses the nearly one million Jews pushed out of the lands of Islam in the 20th century. From our vantage point in 2015 it seems that what happened to the Jews of the Middle East was only the first fissure in the regional landscape, only the first erasure of an ancient regional minority; others have followed and are following, the Christians among them, without a state of their own to flee to. ‘It is never really about the Jews,’ Wilf writes. ‘That is why it never ends with them. Hatred of Jews is about those who hate – not about those who are hated.’

That analysis, with which I must agree, is why I have my doubts about another of Wilf’s observations about intellectual efforts on behalf of Israel: ‘while victory in this battle, as in others, is not likely to be swift, with the proper resources, organization, and determination it is within reach.’ I don’t think this is the case, just as I don’t think that eloquent explanations in the 1920s could have convinced Germans that Jewish bankers were not manipulating the financial markets for their own devious gain, or that skilful essays or speeches could have countered the idea in capitalist countries that Bolshevism was a Jewish plot. No ‘war of words’, however skilful, can defeat the anti-Jewish obsession that crops up with unfortunate regularity in world history, of which today’s anti-Israel fixation is merely the most recent incarnation. Explanations of Israel’s complexities in the real world will have a limited effect not just because they are necessarily complicated, but because the Israel obsession – in the manner of obsessions – isn’t really about Israel at all, or about the real world. These pathologies can perhaps be tempered on the margins but cannot be made to go away.

An involvement with the Jewish state ‘is not for the fainthearted,’ Wilf writes: the country never promised to make it easy for anyone and indeed has never done so, like ‘a high-maintenance girlfriend,’ at once impossible and irresistible. ‘In return for never-ending efforts to woo her, not a trace of gratitude is to be offered – barely an appreciative smile.’ Wilf seems tough enough to keep it up nonetheless. Her efforts are crucial, and there is no reason to expect them to be less necessary or easier anytime soon.