by Norman J.W. Goda
BACK 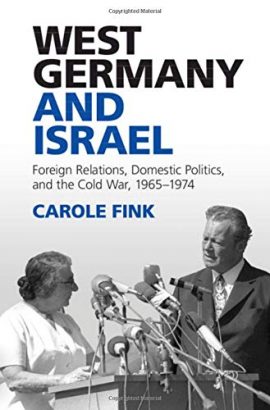 Acknowledging German guilt for the Holocaust, Chancellor Konrad Adenauer helped initiate in the early 1950s a relationship with the new state of Israel, based on reparations, low interest loans, and arms sales. The policy was not popular in Adenauer’s Christian Democratic Union, but acknowledgement of the Nazi past helped Bonn to align with the West at a critical moment in NATO’s development. Israeli Prime Minister David Ben-Gurion also faced opposition to developing a relationship with Germany. But Israel was loaded with newly arrived refugees, in need of economic development, and surrounded by hostile neighbours. In a bipolar world recovering from war and dominated by the superpowers, the relationship made sense. The remaining ambivalence – Israel’s anger over the German statute of limitations on war crimes and West German anxiety over Arab anger, for instance – meant each side withheld diplomatic recognition until 1965, whereupon 10 Arab states broke relations with West Germany.

In her very fine book, distinguished historian Carole Fink provides an exceptionally well-researched and nuanced analysis of the subsequent period. ‘Brittle’ is the word she uses to describe the West German-Israeli relationship, the reasons lying in divergent foreign policy aims and complex domestic pressures in both states as they developed from the mid-1960s to the early 1970s. To Fink, Bonn’s relationship with Jerusalem became about not just the past, but about the present and future as well. As the Israelis insisted on maintaining the current relationship owing to Germany’s historic guilt on the one hand and Cold War dynamics on the other, the West Germans insisted on a ‘normalised’ relationship based on their changing European and global position.

Bonn never abandoned its relationship with Israel as such, nor did it stop acknowledging the German past, however grudgingly. But the Arab states’ break with Bonn in 1965 and their recognition of East Germany in 1967, combined with chronic West German oil shocks and lost opportunities in the Middle East, brought a rethinking, particularly with the ascension of Social Democratic (SPD) leader Willy Brandt as chancellor in 1969. Brandt insisted that he was unburdened by the Nazi past, though as Fink points out, members of his coalition government from the Free Democratic Party had indeed been Nazi Party members including Walter Scheel, Brandt’s vice chancellor and foreign minister, who joined the Nazis as an adult in 1941.

Fink has long studied Brandt’s Ostpolitik – his Eastern diplomacy. In Europe it centered on cracking through the superpower rivalry by easing tensions through agreements with the Soviet Union and Poland, starting with recognition of the Oder-Neisse frontier as the all-German Eastern border, thus easing fears of German revanchism while normalising, to a point, relations with East Germany. Yet Fink has also understood that Brandt that Ostpolitik had a global reach, that that there was a Nahostpolitik that involved West German initiatives in the Middle East, where Bonn hoped to ease local and superpower tensions while creating space for itself in the Arab world.

For the Brandt government this meant balancing West German’s relationship with Israel with that toward the Arab world – ‘evenhandedness’ as it was described. Could it work? Matters for West Germany were complicated by the aftermath of Israel’s stunning victory in 1967, Israel’s subsequent inability to make peace, open French sympathy with the Arabs in the Paris-dominated European Economic Community, the pro-business sentiment of Brandt’s coalition partners who saw the Israelis as friends but also moral blackmailers, pro-Palestinian noise on the radical West German Left and even in within Brandt’s SPD, and routine Palestinian terror, which reached and terrified West Germany.

For Israel under Golda Meir’s government (1969-1974) matters were difficult for other reasons. The determination to secure borders via bilateral peace negotiations with neighbours ran counter to the reluctance of even moderate Arab leaders to cross the hardliners. Europe meanwhile, insisted on a comprehensive settlement that included the Palestinians. The post-1967 emergence of the Palestinians as the darlings of Third World-ism increased Israel’s global isolation and promoted an odd tolerance for Palestinian terror. And Meir faced problems at home from the hawkish and popular Defense Minister Moshe Dayan and a growing religious Right, who were determined never to surrender the West Bank or Gaza, to a crippling defense budget and the chronic need for foreign aid.

Under these circumstances, the relationship with West Germany could never be easy. It was symbolic that despite Brandt’s famous Kniefall at the Warsaw Ghetto memorial in December 1970, Brandt made no such gesture at Yad Vashem during his prickly, oft-postponed and even reluctant state visit to Israel in June 1973. Brandt was the first sitting West German chancellor to visit Israel, but his visit to the only such Holocaust memorial of day was conditioned by the Foreign Ministry’s worries concerning Arab reactions. Indeed, Brandt told a disbelieving Israeli television audience that his government would also support ‘the rights of the victims in the Middle East conflict’.

Yet problems were not just symbolic. The Israelis were regularly disappointed with West Germany’s response to Palestinian terror. It was not just that West German officials bungled the rescue of the kidnapped Israeli athletes in Munich in September 1972, resulting in the murder of all nine. It was that despite Brandt’s quiet compensation to the athletes’ families, Bonn refused to punish the Arab states in their refusal to condemn the Black September terrorists, freed three imprisoned perpetrators of the Olympic attack in response to the hijacking of a Lufthansa jet in the following month, and had government officials meet with senior Palestine Liberation Organisation (PLO) leaders the following year. West Germany, Brandt insisted, was neutral in this conflict and could not have it spread to German soil. With such cold comfort from Bonn, even as Israel faced condemnation for attacking PLO bases in Syria and Lebanon, it was no wonder that the Israelis felt isolated in their fight against terror.

The Yom Kippur War of 1973 provided the ultimate friction. Though 57 per cent of West Germans sympathised with Israel after the Egyptian and Syrian attacks, it was the 71 per cent of all oil West Germany received each year from OPEC that spoke louder. West Germany’s neutrality triggered cabinet anger at Richard Nixon for airlifting supplies to Israel from the US without consulting Bonn, and shipping NATO supplies from West Germany itself to Israel, so much so that the West German authorities turned one Israeli freighter back after it docked in Bremerhaven. The step infuriated the White House as well as the Israelis, and the entire episode, and what it represented, healed only slowly, as the fall of the Brandt and Meir governments in 1974 moved relations to a new phase.

Fink is too good a historian to fall into blanket accusations of antisemitism, though of course the explanation works in certain instances. Rather, she sees high-level testiness resulting from state interests, pursued amidst rapidly changing domestic and foreign policy variables, all against the backdrop of an overwhelming past. And indeed, the richness of her analysis includes the cultural element, from the pro-Israel Springer press in West Germany which likened divided Jerusalem to divided Berlin, to the awkward Holocaust-relativising comments of Günter Grass at the Hebrew University in March 1967, to the regular public protests faced by German and Israeli ambassadors alike, even the highly able Asher Ben-Natan, who served in Bonn from 1965 to 1970. Fink’s book reminds us that relations between states and societies, particularly two such as these, cannot be captured easily. As such her careful analysis deserves our attention. 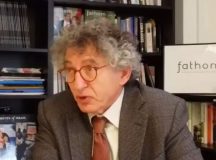 By Jeffrey Herf
Jeffrey Herf is Distinguished Professor of History at the University of Maryland. His books include... Read more > July 2019 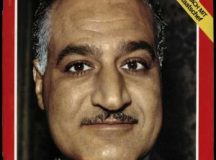 Antisemitism and Anti-Zionism in West Germany in the...

By Martin Jander
In this provocative analysis of discourse about Israel in West Germany in the 1970s, Martin... Read more > July 2019 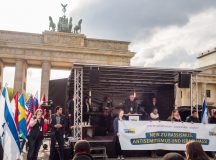 Pop Islam: How Germany is tackling the new...

By Daniel Rickenbacher
In 2018 Germany appointed the diplomat Dr. Felix Klein to the newly created post of... Read more > July 2019