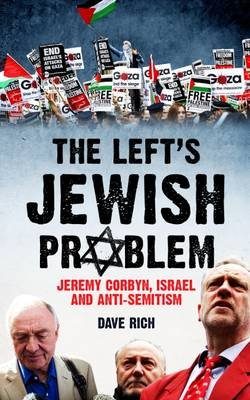 To say this is a timely book is something of an understatement. Over the past few months, evidence has been systematically accumulating that the British Labour Party has come to tolerate antisemitism to an extent that might previously have seemed implausible to many people who consider themselves to be ‘on the Left’. This development is connected to the take-over of the Labour party by purportedly radical sections of the Left, who have entered the party en masse and successfully elected Jeremy Corbyn, as its leader. As this book shows, both the leader and his acolytes have a very serious problem with Jews, which has been years in the making.

Its roots lie in a fundamental change of attitude on much of the Left towards the State of Israel where a very large proportion of Jews now live. That they came to live there is in significant measure to do with the radicalisation of antisemitism which culminated in the Holocaust, a catastrophe which too many on the Left are not only unwilling to think about but have come to distort in ways that legitimise their own (to some extent) distinct form of antisemitism. That change of attitude, as Dave Rich clearly explains, began when Israel became a powerful state in the Middle East, after the Six-Day War in 1967, a war which many Jews had rightly feared could result in its destruction and the murder (only two decades after the Holocaust) of the large number of Jews living there.

There had though, as the author reminds us, long been a section of the Left whose opposition to Israel was accompanied and informed by antisemitism. Despite its temporary, opportunistic endorsement of the creation of the State of Israel, the Stalinist Soviet Union quickly reverted to its traditional hostility to Zionism, reasserting the argument that Jews (uniquely) were not a nation and had no right to a nation state of their own, and at precisely the moment it was launching a new wave of antisemitism  through show trials of ‘Zionists and cosmopolitans’ in Eastern Europe, and later, with the Doctors’ Plot in the Soviet Union, both of which directly targeted Jews. The New Left which emerged in the 1960s was generally anti-Stalinist but failed to question the Stalinist position on Israel. Instead it built upon it, casting Israel as an artificial Western enclave imposed on the suffering Arab masses in the Middle East and as an agent of American imperialism. As their past differences subsided, especially when the Soviet Union collapsed and all hatred could be focused on the US as the one remaining superpower, antisemitic anti-Zionism proved to be the ground upon which Stalinists and remnants of the New Left could be reconciled and reunited. It is no accident, as Rich points out, that two key figures in the Stop the War coalition (which Corbyn chaired and whose membership lists were so crucial to his election) were the Trotskyist Lindsey German and the unreconstructed Stalinist Andrew Murray.

But the New Left was not only made up of dissident Marxists. Rich argues that it included the Young Liberals, who first put forward the slanderous parallel between Israel and South Africa. Jews who had fled to Palestine were now depicted as white colonisers from the West, despite the fact that the majority first came fleeing persecution in Eastern and Central Europe before being joined by those expelled from Arab countries. These supposedly white colonisers were now, purportedly, creating their own apartheid society, in Israel, supported by Jews particularly in the US and Europe, who had now supposedly become fully integrated and white, antisemitism after the Holocaust having apparently magically disappeared. Although the Young Liberals soon faded from the scene, this argument was key to widening opposition to Israel beyond the Stalinist and (increasingly less) Marxist New Left. It led to the charge that Jews, the victims of the most murderous racism, were now the real racists, inverting the Holocaust. The most notorious expression of this was the UN definition of Zionism as racism which, in the UK, was picked up and used by anti-Zionists who sought to ban Jewish societies in universities. It should not have been difficult to see that a campaign which targeted Jews was self-evidently antisemitic. To their credit, some on the Left, including Eurocommunists in the CP (making a very belated effort to distance themselves from Stalinism) and the supporters of the Trotskyist newspaper Socialist Organiser (now known as the Alliance for Workers Liberty), did come to the aid of those Jewish students at that time. It is one of the signal merits of this book that, in detailing how this campaign against antisemitism was won, it reminds us that there is a tradition on the Left of understanding, recognising and defeating antisemitism within the Left.

But the book also charts how much more difficult that task has become, as a new force has emerged to which a significant section of the Left has now allied itself. That force is Islamism. Working closely with Islamists in mobilising large numbers to oppose the Iraq War, a significant section of the Left found common ground (as Stalinists and the New Left had earlier done) with Islamists in their shared hostility to Israel. This time the antisemitic nature of so much anti-Zionism could not be covered up. This antisemitism combines old and new elements. Alongside a dramatic revival of well-known old antisemitic tropes, from blood libels to conspiracy theories which depict Jews now controlling everything from the banks to the media to US foreign policy, Israel is now routinely depicted as the new Nazi Germany and indeed, in a telling inversion of the Holocaust, accused of committing genocide against the Palestinians.

The combination of anti-colonialism, anti-Americanism, the apartheid smear and the charge of genocide is a toxic brew, but it has succeeded in mobilising quite large numbers of people, many of whom have enthusiastically enlisted in the campaign to take over the Labour Party. Some are in wilful and conscious denial of their collusion with antisemitism; others are blocked from thinking about it because they know nothing of the complex (but not that complex) history of which this book reveals. What they all agree on and like to tell themselves is that they cannot be antisemitic because they are anti-racists. This feeble defence (particularly dear to the Labour leader) is itself part of the problem of course. It is not just that antisemitism is not only a form of racism: Nazi antisemitism combined religious and racist elements very effectively, as does (in its own way) Islamist antisemitism. It is also that it rests itself to a significant extent on antisemitism, in projecting racism onto Israel (the apartheid smear), in converting Jews into the most racist of whites, and into perpetrators of genocide. How the Left is to get out of the mess in which Corbyn and his colleagues have dug is a major challenge, which at the very end of this book the author briefly addresses. As he points out, it would require a much more informed and serious understanding of antisemitism, and the damage it does not just to Jews, but to the Left itself. This lucid and compelling book makes a major contribution to what is now becoming an urgent task.

By David Hirsh
Abstract This paper is about a preference within contemporary left-wing culture for defining opponents as... Read more > Autumn 2016

By Alan Johnson
A shorter version of this talk was delivered as a contribution to a panel discussion... Read more > Autumn 2016