Book Review | The Left in Disarray 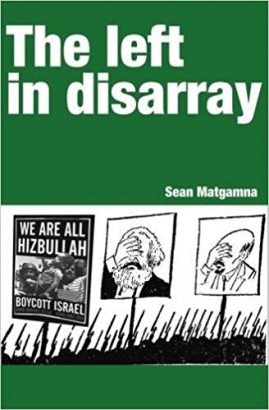 Most of the time, the key terms of the anti-capitalist Left have no clear meaning, they express and convey emotion, not reason. They are the tools of demagogy more than of reasoned discourse … our language of politics is decayed, disablingly.

So opens Sean Matgamna’s timely book on the moral gangrene of the British Left. In connection with apologia for Mao’s murder of 70 million Chinese, he speaks of ‘mind-rotting conflation, purging of the real meaning of words, vandal destruction of important concepts, smart-ass apologist’s attempts to obscure important distinctions’. And of course, Matgamna focuses in detail on the foggy understanding of Jews, profound ignorance of Zionism – and the raison d’etre for a Hebrew republic in the Land of Israel.

Matgamna and his supporters within the Alliance for Workers’ Liberty (AWL) have for decades argued for a rational approach to the vexed question of Israel and have not blown in the wind with other sections of the far Left. The AWL emerged as an opposition to the wholesale support for the Soviet invasion of Afghanistan in 1979 on the revolutionary Left.

An admirer of Trotsky, Matgamna has been labelled a ‘Zionist stooge’ and a ‘turncoat’ by the rest of the Trotskyist Left. Neither a Zionist nor a Jew, he has stood apart from the campaign to demonise Israel and, in a sense, defined how socialists should act. Moreover this code of ethics of someone on the far Left would bewilder many official defenders of Israel within British Jewry who are unable to find any blemishes in Netanyahu’s policies. Significantly Matgamna quotes the Irish socialist, James Connolly’s comment that ‘impartiality in the face of injustice is the virtue of a slave’. For those who have moved from the Left to the Right, figures like Matgamna, are particularly perplexing and threatening. They would also argue that such groups are decidedly irrelevant. However as events have demonstrated during the past year, the revolt against elites can come from the most unlikely of ideological origins.

In 1948, the British Left was passionately in support of Zionism. Aneurin Bevan threatened to resign from Atlee’s government because of Ernest Bevin’s policies in Palestine. Andrei Gromyko, the Soviet representative at the UN, was making quasi-socialist Zionist speeches – indeed Stalin, along with Truman, can ironically be regarded as one of the founding fathers of the Jewish state. British Communists flip-flopped in accordance with Stalin’s wishes. Many Trotskyists who had similarly opposed Zionism recognised the need for a state of the Jews after 1945, following the revelations of the Shoah. After all, if socialism was international, then it could also be built in Palestine – and Jews should therefore not be prevented from emigrating there.

In this book, Matgamna traces the path from reasoned discourse in 1948 to ‘the most malignant hysteria on the Left’ in 2017 and attributes it to a Stalinisation of thought. As newer generations become politically aware, twentieth century history becomes less significant when faced with today’s problems. The history of the Jews becomes marginalised and the richness of Zionist ideology is reduced to a malicious soundbite and a meaningless slogan.

In part, this is due to a growing identification with the colonised world in the post-war era and a new generation’s identification with the struggles for liberation in the 1960s. Even before the post-1967 settlement drive on the West Bank, many on the New Left found it easier to identify with the embryonic Palestinian national movement than with Marxist Zionists in Israel. Yet as Jeremy Corbyn’s odyssey demonstrates, this also led to turning a blind eye towards reactionary regimes in the developing world. Matgamna remarks that ‘confused anti-imperialism is a central root of the absolute anti-Zionist dominant in the addled Left today’. After all, few drew attention to the fact that at one point in history, Russian nationalism, posing as international Communism, dominated a third of humanity against their wishes. An inability to think outside the received ideological wisdom has led many on the Left up one-way streets such that the elimination of Israel has become a mere detail in the unfolding revolutionary drama.

Perhaps a key question for many Trotskyists was how far to align themselves with the foreign policies of the Soviet Union. During World War II many Trotskyists saw a political equivalence between the Allies and the Nazis. Both, it was argued, had forced workers into uniforms to further the ends of capitalism and imperialism. When the Normandy landings took place in the summer of 1944, the French Trotskyist publication, La Vérité, proclaimed that ‘they’re all the same… Roosevelt’s liberation is the same as Hitler’s socialism’.

During the post-war period, Trotskyist groups in different locations supported North Korea during the Korean war, China in annexing Tibet in 1959, the USSR in invading Afghanistan in 1979 and Serbia in the intended ethnic cleansing of Kosovo in 1999. Like many on the Left, they supported Ho Chi Minh and the National Liberation Front during the Vietnam war. What was airbrushed out of the narrative was Ho Chi Minh’s killing of hundreds of Vietnamese Trotskyists after the war and the decimation of their sizeable movement. Clearly Ho Chi Minh’s imitation of Stalin’s murderous practice would not have impressed the student generation of the 1960s.

Matgamna points out today that many on the far Left ignore ‘the rise of clerical-fascist terrorism’. Indeed many sided with the ayatollahs during the Iran-Iraq war during the 1980s. But as he incisively points out, when the Comintern under Lenin pledged their support in 1920 for liberation movements in the colonies – it was with the noted exception of pan-Islamic movements. Indeed in 1946, Tony Cliff, later the founder of the Socialist Workers Party, had labelled the Muslim Brotherhood, ‘a clerical fascist organisation’. Yet this did not provide any obstacles after his death to his followers enthusiastically cooperating with the Brotherhood to organise the great protest In London against the invasion of Iraq in 2003.

Matgamna does not shy away from anti-Semitism on the Left in Britain – and mentions the racism of such revered founders of British socialist thought, Henry Hyndman and J. A. Hobson. He argues that the attitude towards the Jewish nation is unique. In the universities, he believes that antagonism towards ‘Zionist Jews’ interfaces with Jews per se and takes on ‘a nasty persecuting quality’. He pointedly adds that non-Jews who defend Israel’s right to exist are not classified in the same category.

He dismisses comparisons between Israel and apartheid South Africa or Ian Smith’s White Rhodesia and suggests that the closest analogy is with the Protestants of Northern Ireland. Yet no one, he points out, has suggested that the Protestant community should leave and return to the mainland.

Matgamna argues that it is Stalinism and its legacy that has created ‘the ideological chaos that still engulfs the Left’. Lenin, however, is left untouched. In 1919 the teaching of Hebrew was prohibited in Russia and many Jewish communal institutions were closed down. It can be argued, of course, that this was at the instigation of the Jewish Communists – many of whom were former Zionists. Yet Lenin did not act. Why?

Matgamna also argues that Jeremy Corbyn has reclaimed the Labour party for the working class. Yet Corbyn has been closely associated with the pro-Kremlin section of the Communist Party – the ‘Straight Left’ faction which opposed perestroika and glasnost – since the 1980s. Some of whom attempted to provide an ‘understanding’ for Stalin and Stalinism while others even worked for the Soviet Novosti press agency – truly the purveyors of fake news. These associates now form Corbyn’s inner circle in the Labour party. While ‘Old Labour’ policies have been resurrected and indeed there has been a return to Labour’s traditional advocacy of a two state solution for the Israel-Palestine conflict, should we not be vigilant as the future unfolds?

At the end of his book, Sean Matgamna devotes a chapter to five individuals who shaped the British Left: Tony Cliff, Ernest Mandel, Tony Benn, Gerry Healy and Ted Grant. These vignettes are fascinating but what is left unsaid is their relationship with Jews and Zionism. Three – Cliff, Mandel and Grant – were Jewish.

Ezra Mandel and Abraham Wajnstok were Jews of Polish origin who had flirted with Marxism Zionism. But as with Cliff and Grant, the aggressive march of Nazism during the 1930s, the Stalinist show trials of old Bolsheviks and the seemingly irrelevance of Zionism pushed them towards Trotskyism. At the war’s end, Ezra emerged as Ernest Mandel, having been partly protected by his father’s wealth as an Antwerp diamond merchant – although he was incarcerated in Flossenberg concentration camp. Abraham Wajnstok died at Auschwitz but was resurrected by the far Left after 1967 as Abraham Leon, author of The Jewish Question: A Marxist Interpretation. This became de rigueur reading for the anti-Zionists of the New Left.

Tony Benn, of course, was worshipped in old age by the far Left. In the 1950s he was an uber-Zionist and a regular contributor to the Jewish Vanguard, the weekly publication of the Labour Zionists. While Matgamna rightly condemns the demand for the ‘Right of Return’ of the Palestinians, arguing that in practice it is a means of denying the right of the Jews of Israel to national self-determination, he omits to say that Tony Benn, towards the end of his life, attended the Right of Return movement’s rallies at Trafalgar Square. Benn was both unable and unwilling to explain such ideological inconsistencies.

Gerry Healy, of course, was the most sectarian of Trotskyist leaders. Jim Allen, author of the infamous play, Perdition, during the 1980s, the acclaimed filmmaker, Ken Loach and Vanessa Redgrave, the much-admired actress, were attracted by his world outlook. Yet he also accepted funding from Muammar Gaddafi and Saddam Hussein for his Workers Revolutionary Party. He consequently became a devout advocate of the Palestinian cause through his newspaper Newsline and had a remarkably close relationship with Ken Livingstone. He was not averse to crossing the line where anti-Zionism tipped over into anti-Semitism.

Sean Matgamna’s book is a fascinating study of the British far Left – through argument and through experience. Clearly not everyone will warm to it, yet it is an important, unusual work for any reader interested in the Left’s tortuous relationship with Zionists and Jews in the 21st century.

By David Hirsh
Abstract This paper is about a preference within contemporary left-wing culture for defining opponents as... Read more > Autumn 2017

By Norman Geras
Israel has been made an alibi for a new climate of antisemitism on the left.... Read more > Autumn 2017