Fathom > June 2020 > Book Review | The War of Return: How Western Indulgence of the Palestinian Dream Has Obstructed the Path to Peace

Book Review | The War of Return: How Western Indulgence of the Palestinian Dream Has Obstructed the Path to Peace 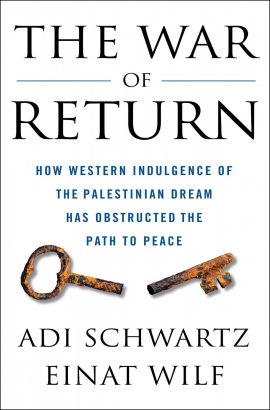 There is perhaps no aspect of the Israeli-Palestinian conflict that is subject to greater distortion than the so-called Palestinian ‘right of return’. The term refers to the demand, erroneously stated as a legal right, for the Palestinians (and their descendants in perpetuity) who resided in part of the British Mandate for Palestine that became Israel to return to their former homes, now 72 years after the failed Arab invasion of Israel during which they left. On the face of it, the demand sounds like a perfectly reasonable appeal to the world’s conscience – to allow those inadvertently caught in the throes of a great regional war to return to their homes and resume their peaceful lives. The boycotts, sanctions and divestment campaign (BDS) has the ‘right of return’ as one of its three core demands.

In their new book, Einat Wilf and Adi Schwartz attempt to show through calm, patient storytelling backed by historiography and a depth of evidence, that the right of return is in fact no right at all, and is instead, a thinly veiled demand for the destruction of a sovereign state.

On first examination, a book devoted to a single aspect of the Israeli-Palestinian conflict may seem remote, even indulgent, and surely of appeal only to those already possessing a command of the history and the issues. But Wilf and Schwartz have shown how this one issue is in fact the issue that explains why peace between Israel and the Palestinians eludes us, why fair offers of Palestinian statehood are scoffed at, and why the Palestinian leadership has never been able to even utter the words, ‘we recognise Israel as the national home of the Jewish people’. They also demonstrate the skill of very fine writers of history who are able to distil complex topics into something that is easy to understand, pleasurable to consume, and useful both to the scholar and to the casual observer. Credit must also be given to Eylon Levy for the clarity and elegance of his translation. One never has the feeling of reading a text originally written in another language.

The War of Return rightly begins by examining Israel’s War of Independence, from which the refugee issue arose. Wilf and Schwartz address the claims of calculated, strategic ethnic cleansing by Israel, upon which the Palestinian narrative is largely predicated, by showing that no such plan was ever conceived, let alone implemented. The vaunted ‘Plan Dalet’, the supposed ‘smoking gun’ of Israeli genocidal intent, was no more than a military strategy to differentiate between Palestinian combatants and non-combatants, clearing the former and leaving the latter unmolested, to ensure that Israeli forces could focus on repelling the invading Arabs armies without having to also fight Palestinian militias behind their own lines.

The accounts of the marauding newsman for the New York Herald Tribune, Kenneth Bilby, provide a fascinating and highly useful insight into the Palestinian psyche immediately after the cessation of hostilities that saw some 700,000 Arabs who had resided in what became  Israel relocated into Gaza and the West Bank and the refugee camps in the neighbouring Arab states. Bilby’s interviews of Palestinian refugees in 1948 serve as a baseline for Palestinian attitudes toward Israel, Jews, and the prospects for peace and reconciliation, against which we can evaluate whether the intervening 70 years and the policies that were initiated during the time have brought us any closer to peace. Bilby spoke of an indignant, burning rage to exact vengeance on the treacherous race that had plundered their homes and driven them away in humiliation. ‘If it takes a hundred years, we will drive the Jews from our country,’ one businessman tells Bilby. ‘You ask me what I will do if I cannot get home,’ another displaced Palestinian tells Bilby. ‘I’ll tell you. I’ll move my wife and my children into the hills around Tulkarm, overlooking the coastal plain which the Jews took. Every day I will take my children to the hill ridge and say: “This was yours. This was stolen from you. You were robbed and deceived and betrayed. Never forget it!”’ Readers who have recently travelled to the West Bank and interacted with the locals can decide for themselves whether the UN Relief and Works Agency for Palestine Refugees in the Near East (UNRWA), Oslo, Camp David and the rest have in any way softened the attitudes Bilby encountered.

By surveying the attitudes of the Palestinians to the concepts of Jewish human and national rights, Jewish indigeneity, and Israel’s basis in international law and in fact, Wilf and Schwartz show us precisely why a conflict that Western diplomats think can be resolved by drawing lines on maps remains unsolved and arguably unsolvable.

Wilf and Schwartz then show us how the pain of 1948 was not soothed by Arab leaders and intellectuals in the years that followed. On the contrary, it was deliberately seared into the Palestinian national psyche, indeed it became the Palestinian national psyche. This was done through Palestinian poetry and literature that instilled in the people a fervent belief that they had suffered a cosmic injustice, perhaps one unrivalled in human history, and that they would return to exact their revenge on a people they considered loathsome and inferior.

The book then takes us through the international involvement in the refugee issue – the dark hand played by the Arab states for whom keeping the Palestinians encamped, often as second-class citizens, lest the Palestinians move on with their lives and forget for one moment their mission of return and conquest. And it charts the role of the international community in the issue as well. A role that was often just as malevolent, self-serving, and disastrous. From Lord Bernadotte onwards, Western interlocutors in the refugee question show us that international efforts to resolve the conflict invariably insert new grievances, prejudices, and interests into the task of peace-making, often driving the parties even further apart.

Perhaps of greatest relevance to current policymaking, Wilf and Schwartz show us how UNRWA, tasked with ameliorating the refugee problem, is an accomplice in the perpetuation of the refugee issue, and by extension the continuation of the conflict. Wilf and Schwartz establish how the UNRWA refugee camps became terrorist training camps and indoctrination centres that resulted in much blood and anguish and destabilised the Arab countries in which they were situated. A Fatah leader observed that his organisation could only train one terrorist at a time, but UNRWA schools could train the hearts of the masses.

The forensic analysis of Resolution 194 is highly useful while the inside story of how the Palestinian refusal to relinquish their ‘right of return’ derailed Camp David and spawned the Second Intifada, makes for entertaining reading.

All in all, Wilf and Schwartz depict a pathetic situation by which Israel, the party that accepted every international proposal for a two-state solution, defended itself in war, and established a state pursuant to liberal-democratic norms, is expected to do what no other country on earth has done or would do: admit into its sovereign territory hundreds of thousands, even millions of people who reject the very basis of the country into which they seek passage.

Perhaps the West was seduced by Palestinian leader Yasser Arafat’s oratory, his ambiguous allusions to a ‘just solution’ to the refugee problem inexplicably taken by many to mean an abandonment of the right of return. Perhaps the West cannot shake off the vestiges of imperialist thinking and assumes that if it draws demarcation lines of sufficient deftness and ingenuity all grievances will crumble in their wake. How else can one explain the habitual giving of the benefit of doubt, imputing benevolent motives when the truly destructive ones have been stated plainly to us, over and over again?

Wilf and Schwartz through the quality of their writing and the depth of their scholarship do a great service to those seeking to understand what this conflict is truly about and what is needed to finally resolve it.

By Einat Wilf
For the sake of peace, reform of the United Nations Relief and Works Agency (UNRWA)... Read more > June 2020 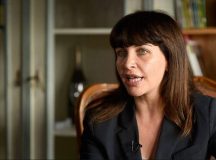 Why UNRWA is an obstacle to two states...

By Einat Wilf
Einat Wilf is the co-author of The War of Return (with former Haaretz journalist Adi Schwartz). She... Read more > June 2020 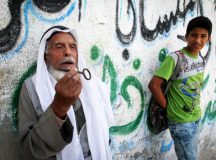 By Simon Waldman
Dr Simon A. Waldman is the author of Anglo-American Diplomacy and the Palestinian Refugee Problem, 1948-1951. In this... Read more > June 2020