Book Review |Boycotting Israel is Wrong: The progressive path to peace between Palestinians and Israelis

by Luke Akehurst
BACK 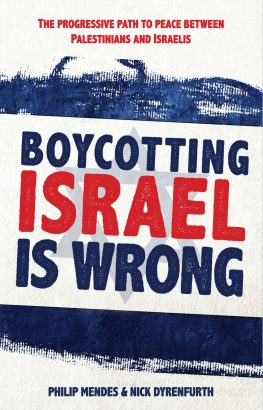 Boycotting Israel is Wrong is a timely short book on the BDS phenomenon by Australian academics Philip Mendes and Nick Dyrenfurth.

It combines the force of a rigorously argued polemic with the authority of a properly footnoted academic paper, and in just 205 pages manages to provide a historic overview of the changing relationship between Zionism, Israel and the Western left; useful case studies of Boycott, Divestment and Sanctions (BDS) in Australia, the UK and the US; and a progressive dissection of the motives, ideology and methodology of the boycotters.

Mendes and Dyrenfurth pull no punches. They describe BDS as a ‘rather dubious moral successor’ to the anti-apartheid movement, and ‘the worst of any of the conflict resolution solutions currently on offer.’ They set out to prove that ‘at its core’ it is ‘a thinly veiled campaign to resuscitate the so-called one state solution whereby the State of Israel would give way to an Arab-dominated Greater Palestine’ and neatly do so by dissecting the superficially attractive three main aims of BDS – ending the occupation, full equality for Arab citizens, and securing the right of return – and how these are interpreted by the BDS movement in a way that is incompatible with Israel’s continued existence. They conclude that the BDS movement has constructed a ‘fantasy world in which Israel is detached from its specifically Jewish roots, and then miraculously destroyed by the political equivalent of a remote control’ thus overcoming the Left’s ‘historical opposition to racism’ and the genocidal war that would be the only real way to destroy Israel.

But the authors are themselves from the centre-left so they are not ‘Israel right or wrong’ voices. They describe the occupation of the West Bank as a ‘dangerous folly’, say settlements ‘clearly preclude progress towards a viable two-state solution,’ and attack Netanyahu for failing to promote that solution. One of their main attacks on BDS is that it strengthens the Israeli right by reinforcing a siege mentality.

They are at their most passionate when exposing the way BDS targets pro-peace left wing trade unions and academics in Israel, saying this ‘tends to write off an entire people, slamming the door shut on peace.’

The book is written in a style that is eminently readable – crisp, concise and punchy. It keeps you turning the page by building up arguments in a way that mirrors a piece of rhetorical public speaking. I read the whole thing in one sitting, not because I had to but because it was a compelling and enjoyable read.

It is strong on defining and highlighting where anti-Zionism becomes antisemitic, and explaining the role played by anti-Zionist Jews in BDS.

It is a great jumping off point on two key areas – the apartheid smear, where one can usefully follow-up with a read of Professor Alan Johnson’s pamphlet of the same name, and the relationship between the Left and Zionism, where Professor Colin Shindler’s book Israel and the European Left is the longer read.

My only criticism would be that it over emphasises the Mendes and Dyrenfurth’s comfort zones of knowledge. There is a lot about the situation in their native Australia, a country where BDS is thankfully confined to a campus and Green Party fringe and hasn’t caught on among mainstream Labor Party or trade union activists. I have a rather obsessive interest in the minutiae of Australia’s heavily-factionalised Labor politics, but the exact details of the BDS debate at Inner-West Marrickville Council may be more than most people outside Inner-West Sydney other than me can digest.

Similarly, there is a lot of global detail about the progress of BDS in areas the authors are familiar with as left-wing academics: campus, trade unions (but particularly academic trade unions), centre-left parties; and rather less about areas they are not so au fait with such as churches, the cultural arena, and (outside Australia) local authorities. It might be strengthened in a future edition by farming out the non-Australian case studies to British and American writers, though the analysis is pretty good given the distance it is written from.

This book deserves to be read by anyone fighting BDS, by anyone interested in the Left’s soul and its relationship with Israel, and by anyone with an open mind who wants to understand this issue. I recommend reading it and I recommend anti-BDS organisations sending a copy to every centre-left politician or political activist they can. Its core message needs to be heard widely: ‘The BDS campaign is bad for Israelis, bad for Jews and bad for Palestinians. It is also corrosive of progressive movements and civil society. To teach good people that Zionism – at its core the Jewish people’s aspiration for national self-determination in their historic homeland – is the first enemy of progress is the antithesis of progressive politics … BDS campaigns have led to numerous manifestations of anti-Semitism.’

It even taught me a new word: ‘spruiking’ (Australian English for publicising or promoting something).

While there are people on the Left and on campus capable of articulating the case against BDS with the passion and intellect deployed by Mendes and Dyrenfurth we should not give up hope that we can defeat this perverse campaign.

By Gabriel Noah Brahm
What is one to make of a volume of specialised essays in contemporary philosophy –... Read more > Summer 2015