Book Review | Ally: My Journey Across the American-Israeli Divide 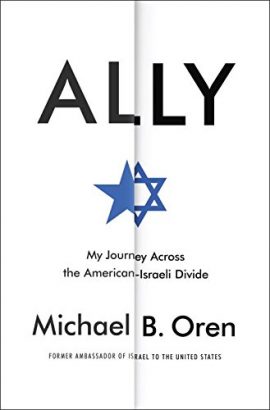 David E. Lowe is the Vice President for Government Relations and Public Affairs at the National Endowment for Democracy. The views expressed here are solely his own.

During the 2008 US Presidential campaign, the historian Michael Oren accepted an assignment from a security affairs journal to research and write about candidate Barack Obama’s views on Middle East issues, including those related to Israel. ‘My findings,’ he writes in his recently published memoir of his four years as that country’s US Ambassador, ‘helped ensure that the future president would rarely surprise me.’

Fulfilling a lifetime dream, in 2009 Oren took on the assignment of representing his adopted country in the country where he was raised and educated. He tells his very personal story in Ally: My Journey Across the American-Israeli Divide.

Oren’s memoir was released in late June to a chorus of criticism that followed a series of slightly provocative opinion pieces by the author to promote the book. The controversy they stimulated is both misleading and unfortunate; misleading because the book itself is written in an analytical, not to mention diplomatic voice; and unfortunate because, far from seeking controversy, it makes an honest effort to report on, and make sense of, the developments, including misperceptions and mutual suspicions, that have strained the US-Israeli relationship over the past six years.

The most vociferous reaction has come from the Obama administration, clearly unhappy with Oren’s take on the points of friction that emerged between two longtime allies over issues ranging from the peace process with the Palestinians and the Gaza blockade to the nuclear negotiations with Iran. But in each case, Oren is careful not to paint with too broad a stroke his criticism of the US President. Indeed, he takes great pains to refute the argument, often voiced by Obama’s detractors in Congress and conservative media, that he is ‘anti-Israel.’

In Oren’s estimation, the president ‘cared for Israel certainly as much as he cared about most other foreign countries and understood the deep affection for Israel felt by … the large majority of Americans.’ On the other hand, the Israel the president admired was ‘an idealized Israel – not the Israel of the settlers and their right-wing backers, a state that was part of the solution, not the problem.’

And just what was the problem? As outlined in his 4 June 2009 speech to a group of Middle Eastern students in Cairo, it was a troubled US relationship with the Muslim world that the president was determined to fix. He was convinced that the best way to achieve the desired goal of improving that relationship was to solve the Israel-Palestinian conflict. It was this concept of ‘linkage’ that the President’s national security advisor emphasised in an address early in the administration to J Street, a relatively new American organisation known primarily for its strident criticism of Israeli government policies.

With the election of a Likud government led by Benjamin Netanyahu shortly after the first Obama inauguration, the stage was set for a series of policy conflicts between two increasingly distrustful allies that were to make Oren’s tenure in Washington so challenging, including: the administration’s insistence on a ‘settlement freeze,’ broadly defined to include Jerusalem neighbourhoods, prior to negotiations with the Palestinians on the future of the West Bank; the US demand for a Netanyahu apology to Turkey’s President Erdogan following the Mavi Marmara incident in which Israelis attempting to enforce a legal blockade against ships making deliveries to Hamas-controlled Gaza were met by a carefully planned attack by members of a Turkish extremist group and defended themselves, resulting in a number of deaths; the president’s call for a return to Israel’s 1967 borders, which drew a strong response from the prime minister in a face-to-face meeting between the two that infuriated Obama and his advisors.

Looming above all of these conflicts were the tensions arising over the Iranian nuclear threat, tensions exacerbated by the administration’s secret negotiations that kept the Israelis in the dark. While resisting the efforts of Congress to expand sanctions against Iran, the president and his advisors made known their strong disapproval of any attempt by Israel to attack its nuclear facilities. For its part, the Netanyahu government was – and continues to be – convinced that the US negotiation over Iran’s nuclear program is headed down the same path as the unsuccessful one it conducted with North Korea two decades ago.

Ally reinforces the conventional wisdom that US presidents, hamstrung by the American constitutional system of checks and balances on domestic issues, are preeminent in the shaping of foreign policy. In contrast with the image of a leader who is often seen as indecisive in dealing with autocrats challenging American national security interests, Oren portrays the president’s approach to dealing with Israel’s leaders as firm and determined.

Although Oren’s overarching observations of his period as the Israeli Ambassador to the US are sound, he does make the occasional misstep. One of them involves his application of amateur psychology to those he is trying to understand, the source of some of the criticism of his pre-publication opinion pieces. While he can be excused for a two sentence speculation about the impact of growing up in a broken family on Obama’s world view, his musings on the harsh criticism directed at Israel by American Jewish journalists is more problematic. That criticism he attributes to their ‘insecurity’ as Americans, even their ‘fear of anti-Semitism.’ The reality is far simpler: a combination of ideology and partisanship, along with disappointment with an Israel whose democratic electorate selects leaders they dislike.

The author’s disapproval of the administration’s handling of the misnamed Arab Spring is useful in highlighting the differences between the perceptions of Israelis and Americans on the prospects for democracy in the region. But while the latter can be faulted for their overly optimistic initial assessment of what would follow in Egypt after the 2011 events in Tahrir Square, Oren’s harsh criticism of the US administration for not standing with Mubarak overstates its role in his downfall.

Oren’s story concludes with his election to the Knesset in March 2015. His experience as ambassador served to reinforce his conviction of the mutual advantages Israel and the US derive from their long term relationship. ‘One immense distinction,’ he contends, ‘separates contemporary Israel from that of the eve of the 1967 and 1948 wars: Israel is no longer alone.’ For their part, Americans cannot detach from the Middle East, ‘for it will follow them home. A robust Israel helps to keep that Middle East at bay and assists in safeguarding that home.’ One can only hope that those who were so quick to criticise the author will find a way to absorb this central message. 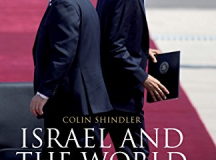 By Jacob Eriksson
This volume comes at a particularly interesting time for Israel. The most recent war in... Read more > Summer 2015