by Avi Kober
BACK 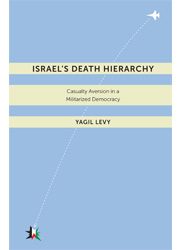 This is an excellent account of Israeli casualty aversion by one of Israel’s leading military sociologists. At the heart of the book lies the question, how do liberal democracies in general, and Israel in particular, manage to encourage individuals to sacrifice their lives in an era when individualism often displaces a commitment to serve one’s country?

Levy bases his analysis of casualty aversion on solid theoretical and empirical ground, and offers a rich and relevant bibliography. He shows how changes in public attitudes towards casualties affect policy and tracks the social origins of casualty aversion in Israel, paying special attention to Israel’s recent low-intensity conflicts with the Palestinians and Hezbollah (the First and Second Lebanon Wars, the Intifadas and Operation Cast Lead).

Levy shows that tolerance for military deaths in Israel varies from one social group to another. He suggests that on this “bereavement hierarchy” the secular upper-middle class groups have shown a high level of sensitivity to casualties, whereas right-wing religious and peripheral groups have demonstrated greater tolerance.

The most interesting part of the book is dedicated to the “death hierarchy,” which reflects the degree to which the state is willing to expose its citizens and soldiers to risk. Again, Levy shows that different social groups are located on different levels of a hierarchy in line with social status: the higher a group’s status the more the state tries to minimise their exposure to risk. Israel has hesitated most before exposing reservists and wealthy groups to risk, as it has been relatively easier for these groups to find alternatives to military service. At a lower level of the “death hierarchy” Levy locates the secular middle class draftees, further down are the religious and peripheral draftees. Last come civilians from peripheral areas – frontier areas, which are usually weaker both economically and socially as compared to the “centre” – and enemy civilians.

One notable find by Levy is the fact that in Israel the lives of soldiers are often considered more precious than the lives of residents of peripheral areas. This is interesting as it violates the “contract” between the state and its citizens – according to which the state should live up to its obligation to protect its citizens in exchange for military sacrifice.

Levy explores strategies for combatting casualty aversion. Alongside increasing the popular demand for protection by leveraging external threats such as Iran, he discusses increasing compensation payments for military sacrifice and diverting the military burden from the middle class to lower classes, for example by adopting an all-volunteer army.

Levy also addresses the tension between sparing the lives of one’s own troops and the lives of enemy civilians. He contends that sparing the lives of one’s own soldiers by employing advanced weapons can result in inflicting more losses on enemy non-combatants. However, statistics on casualty rates in recent conflicts show that accurate weapons can actually reduce casualties among enemy civilians. For example, despite the intensity of the Second Lebanon War, compared to the 1982 Lebanon War, far fewer civilians were killed as a result of IDF operations – “only” 1,187 in 2006 as compared to 8,000 in 1982. This was due to the improved precision of Israeli munitions. By using highly accurate GPS-guided smart bombs (JDAM) against Hezbollah’s Fajr rockets (Operation Specific Gravity) during the first two days of the war, the IAF was able to reduce collateral damage to a minimum. Only 53 Lebanese citizens were killed during the operation, 10% of the number predicted by IAF operations research experts beforehand.

At the end of the book Levy argues that “casualty sensitivity” has affected the relations between civilians and the military. On the one hand, it has resulted in the tightening of civilian control over the military aimed at ensuring casualty rates are politically acceptable. This civilian control has been strengthened further by the activity of extra-institutional players, such as anti-war groups. On the other hand, efforts to compensate the military for the restraint imposed on it has resulted in giving the military a dominant role in operational matters, such as the adoption of a doctrine based on achieving military victory from the air (by air superiority) or via firepower (missiles, rockets, artillery, etc.) rather than by ground manoeuvres. However, this argument, too, can be challenged. The IDF’s dominant role in military matters could also be explained by the combination of the external threats Israel has faced and the country’s strategic culture, which is based on a belief in the IDF’s professionalism, apolitical nature and on the long history of its special role and status in national security decision-making.

Israel’s Death Hierarchy is not easy to read, and one could have expected Levy to refer to the works of Edward Luttwak on post-heroic warfare – a concept he formulated in the mid-1990s following interventions in post-Cold War conflicts in the Gulf and elsewhere. Luttwak observed that the commitment of the US and its allies to avoid casualties among their own troops had become an obsession, which was not always compatible with operational effectiveness. Additionally, Luttwak noted that the imperative to avoid casualties among one’s own troops constituted a diversion from the basic nature of warfare – a phenomenon in which one kills and gets killed.

These caveats aside, the reader will benefit from this original and thoroughly researched book. It illuminates complex aspects of the relationship between society, military, and government in general, and in Israel in particular. As such it is likely to become a must read for both researchers and students.

By Benedetta Berti
Relations between Egypt and Hamas have improved under Morsi. But he has issued no blank... Read more > Spring 2013

By Steven J. Zipperstein
'Had there been telephones back then,’ recalled a close aide years later, ‘Begin would never... Read more > Spring 2013

By David Landau
Few individuals have had more impact on the history of the state of Israel than... Read more > Spring 2013

By Colin Shindler
In his autobiography, Chaim Weizmann commented that Theodor Herzl was ‘not of the people’ despite... Read more > Spring 2013