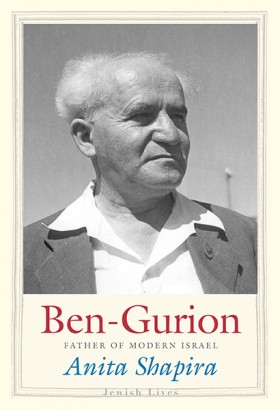 Berl Katznelson, one of Labour Zionism’s ideological founders described David Ben-Gurion as ‘history’s gift to the Jewish people.’ Anita Shapira rightly describes Israel’s first Prime Minister as a Jacobin – a product of revolutionary fin de siecle Eastern Europe, a cold enigmatic figure lacking charisma who changed the flow of Jewish history and redirected it into a national channel. As Shapira remarks, ‘people admired Ben-Gurion, but did not really like him.’

Ben-Gurion’s story began as David Gruen (Green) in the township of Plonsk, marooned on the highway between Warsaw and Gdansk. Over 60 per cent of its inhabitants were Jews and many of them were Gerer Hassidim. Ben-Gurion’s father was a mitnaged, an opponent of Hassidism and a member of the early Zionist group, Hibbat Zion. An outsider from the very beginning, he grew up imbibing the writings of the founders of Zionism. He joined Poale Zion at a founding meeting in the Warsaw home of the Marxist Zionist, Yitzhak Tabenkin and influenced by the 1905 Russian revolution went off to Palestine to build socialism. There, he Hebraised his name to Ben-Gurion – a resistance fighter featured in Flavius Josephus’s War of the Jews.

Shapira argues that Ben-Gurion was less enamoured by the projections of inverted socio-economic pyramids to describe the situation of the Jews by the Marxist Ber Borokhov than by Micha Berdyczewski’s concept of will. Ben-Gurion’s hard, often unemotional, approach – harder than his nemesis, Menachem Begin and certainly less emotional – was cemented in his perception of the reality. For this reason, he related to Churchill’s resolve and rhetoric in the dark days of 1940 and the response of the British to his defiant speeches. In May 1940 Ben-Gurion wrote from London to his wife, describing his wonder at British determination – ‘the level-headedness and inner confidence of this wonderful nation.’ Just as Churchill, despite his sympathy for Zionism, placed British national interests above concern for the Jews, Ben-Gurion similarly did the same for Jewish national interests with regard to the British.

There was widespread disillusionment with British attitudes by the end of the Second World War. Jan Masaryk, the Foreign Minister of Czechoslovakia, tongue-in-cheek, suggested to Chaim Weizmann that they buy a fine London house together. Haile Selassie and the Ethiopians could occupy the first floor, the Czechs the second floor and the Zionists would live at the top of the house. All felt themselves victims of British duplicity.

Despite the public handwringing, six million had perished – the abandonment of the Jews was felt deeply. On VE Day in May 1945, Ben-Gurion viewed the celebrations from his London hotel and confided to his diary the words of the Prophet Hosea ‘Rejoice not, O Israel unto exultation, like the peoples.’ He thus instructed Moshe Sneh to commence sabotage operations against the British in Palestine in 1945 and distanced himself from Weizmann’s pro-British gradualism.

As with his respect for Churchill, Anita Shapira points out that Ben-Gurion also admired Lenin, a man who made a revolution with few resources – he in fact gave a eulogy for him when he died at the beginning of 1924. He wrote, ‘The man possesses the genius of looking at life face to face, of thinking not in concepts but in the fundamental facts of reality.’ But he further described Lenin as ‘a man of iron will who will spare neither human life nor the blood of innocent babes for the sake of the revolution.’ Any possibilities had to be taken and exploited. In Leninist fashion he embraced the Peel Commission proposal to establish a state of the Jews in 1937 despite the opposition of the Revisionists, National Religious and many socialists within his own party. Expediency, not ideological rigidity, separated him from others. In 1934 he was able to strike a deal in clandestine discussions with his Revisionist rival, Vladimir (Zeev) Jabotinsky. Tabenkin and Begin led the opposition to it and any rapprochement was confined to the rubbish dump of history.

On the other hand, Ben-Gurion never worried about violent attacks by labour activists on Jabotinsky’s Betar and never expressed any remorse about handing over members of the Irgun to the British in 1944. He had no compunction about ordering the use of ‘the holy cannon’ to sink the Irgun arms ship, the Altalena, in the summer of 1948. He engineered the dissolution of the Palmach, the Irgun and Lehi and brooked no challenge to the central control of government in the new State of Israel. After 1948, he never visited any Arab village. Zionist politics was not for the faint-hearted. For Ben-Gurion, everything was predicated on understanding the current reality, predicting future events and acting at the right time.

Yet Ben-Gurion was no apparatchik; his actions often sprang from the wellsprings of self-education. While he admired Lenin, he opposed Communism as a solution to the Jewish problem. While he recognised the universalism within Jewish tradition, he led the Zionist faction during the great split in Poale Zion in 1920. His opponents, who believed that they could build Zion in Moscow, returned to the new Russia and disappeared in the Stalinist purges many years later.

His political actions were fortified by his devotion to secular learning – a parallel with Talmudic study. Shapira points out that Ben-Gurion was a compulsive bookbuyer – and often expensive books at that – at the cost of supporting his family. He ultimately amassed some 18,000 volumes. An obsessive visitor to bookshops, he smuggled out of the Soviet Union in 1923 the letters of the writer, Yosef Haim Brenner. He assisted other authors in acquiring funds in order to secure the publication of their books. He catalysed the translating into Hebrew of works by Plato, Spinoza, Darwin, Confucius, Kant and many others. Indeed, he preferred to converse with Isaiah Berlin in Oxford than with men in suits in London.

While Anita Shapira lauds Ben-Gurion’s leadership qualities during the struggle for Israel’s independence in 1948, she glosses over whether he authorised the expulsion of some Palestinian Arabs – especially from Ramle and Lod – and whether he quietly favoured the forced exodus, instigated by Yigal Allon and Moshe Carmel.

The crucial word ‘national’ is missing before ‘self-determination’, and Ben-Gurion was altogether silent about this right at other times. His view on annexing territory also changed. In 1948, he was keen on conquering the West Bank. After 1967 he believed in handing conquered territory back. Shortly before his death in 1973, he was advocating the retention of Hebron.

During the 1950s Ben-Gurion found himself at odds with the more liberal Moshe Sharett – (whom Shapira labels ‘weak’) and preferred his young disciples Shimon Peres and Moshe Dayan. Both followed Ben-Gurion out of Mapai in 1965 to establish Rafi, but left him when they realised that the opportunities to ascend to the top of the tree were very limited in the political wilderness. Ben-Gurion remained outside the Labour Party and stayed with the Rafi rump, the State List. Ben-Gurion left formal politics in 1970. Three years later, the State List became a founding component of the Likud. Dayan left Labour in 1977 to join the first government of Menachem Begin. Shimon Peres left Labour in 2004 to join Ariel Sharon – another defector from the labour movement – in establishing Kadima.

Anita Shapira has written a general, but informative biography of Israel’s founding father – warts and all. She describes Ben-Gurion as ‘the helmsman of the state. It will delight its readers and reclaim in broad terms the remarkable odyssey of a hard, irascible, enigmatic man who truly made a difference. 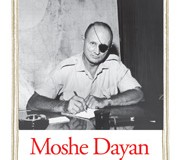 By Shany Mor
Occasionally in the history of nations a character emerges who seems to personify the nation... Read more > Winter 2015 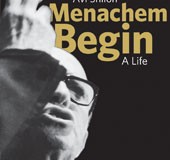 By Steven J. Zipperstein
'Had there been telephones back then,’ recalled a close aide years later, ‘Begin would never... Read more > Winter 2015 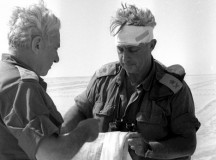 By David Landau
Few individuals have had more impact on the history of the state of Israel than... Read more > Winter 2015