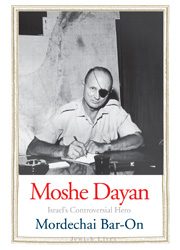 Occasionally in the history of nations a character emerges who seems to personify the nation itself, not so much by being the mirror image of its people but by embodying a certain exemplary image of itself. Such characters often emerge in crises and create a myth of themselves, subtly acknowledging their status as myth. In so doing, they simultaneously tell us a flattering story about ourselves while winking at us too — always careful to maintain a safe distance from the real person and the real people. Moshe Dayan was such a man. Dayan the public figure, the myth, was permanently winking at his public, and not just because of his famous eye patch.

As chronicled in Mordechai Bar-On’s concise, yet thoroughly enjoyable new biography, no one was a better exemplar of the Statehood Generation than Moshe Dayan. Its greatest successes, such as the Six Day War, were also his personal successes; its greatest failures, such as the opening of the Yom Kippur War six years later, were his personal failures as well.

So entwined is Dayan’s life with that of the State that in dividing it into four discrete periods Bar-On has not used any of the personal or professional milestones (marriage, career, place of residence) that would ordinarily serve the biographer as signposts, but rather split Dayan’s life along the major historical turning points in Israel’s early history. Thus we have Dayan’s early life until the War of Independence (1922-1948), and then Dayan from Statehood to the Six Day War (1948-1967), followed by Dayan as Minister of Defence and effective overlord for the Occupied Territories until the Yom Kippur War and its immediate aftermath (1967-1974), and finally his late redemptive period of diplomacy and decline (1974-1981).

It is during the second period that Israel’s civic religion, sometimes referred to by Ben-Gurion’s largely untranslatable Hebrew term mamlakhtiut, is constructed — a Spartan, secular, militaristic ethos characterised by high social solidarity. It was in this period that Israel rapidly developed from a poor backwater to a first-world democracy and that the Israelis developed from a diverse collection of traumatised refugees into one Hebrew-speaking nation. The high point ofmamlakhtiut was, of course, the moment that would eventually herald the changes that began its unravelling — the Six Day War in June 1967.

Bar-On carefully and compellingly weaves the Israeli story of this early Statehood period with Dayan’s own personal story, but what is only hinted at, though never stated explicitly, is how much Dayan himself, though in so many ways an exemplar of the Israelis of this period, never really bought into the ethos of the time. The Israel of the first twenty-five years of statehood was a highly mobilised society in an aroused state of post-trauma from both the Holocaust and the events of 1948. Much of its vaunted solidarity and economic development was eased by its isolation from the world — from the Europe which had rejected its Jews and from the Arab Middle East which refused to accept the presence of a Jewish state in its midst. Closed markets abetted rapid economic development and closed cultural horizons — Israelis did not even have television until 1968 — fostered a cohesive identity.

None of this fitted Dayan’s outsized personality, and I believe that this is the key to understanding the decisions Dayan made that had the most lasting impact on Israel — specifically, the decisions which established the special regime in the West Bank after 1967. Many books in the past decade have explained various aspects of Israeli decision-making regarding the territories in the immediate aftermath of the lightning victory in June 1967. The dilemmas are, and were, well known. All three obvious solutions — annexing the West Bank to Israel, returning it to Jordan, establishing an independent Palestinian state — had enormous risks and disadvantages which militated against adopting any of them. In the absence of a reasonable alternative, a status quo prevailed.

This story might do well as a tale of Israeli decision-making or even as applied to specific Israeli leaders, but it can’t adequately cover Moshe Dayan, because for him the status quo didn’t just happen; he created it. And, by all indications, he loved it. Everything about the ‘enlightened occupation’ (a term we have come to snigger at but which I still believe is a useful window into the contemporary mind set) suited Dayan’s sense of himself. It gave him direct power over millions of subjects; it repeatedly left him feeling noble and generous and humane, while giving him the occasional illusion of being loved or at least feared; and it connected him to the Land of Israel and the wider Middle East in a way that he, quite unlike the other early kibbutzniks and certainly unlike the wider Israeli public of the Statehood Generation, so longed to be.

As Bar-On relates, Dayan’s first brush with fame was with a well-publicised youthful hike through remote parts of the country that were considered far too hostile for Jews to be travelling in. 1948 removed from view so much of that land, so much of that rootedness of the Arab population that he admired but whose longing for collective self-determination he was never able to fully understand.

The status quo of the occupation fell apart 20 years after it began with the First Intifada, but it still has a hold on far too many decision makers on both sides of the conflict. Dayan didn’t live to see his project crash in on itself, nor did he live to see the army he built invade Lebanon and occupy Beirut, turning itself from the world’s most effective and admired offensive military force into an army that has nearly continuously for thirty years been engaged in one form or another of counterinsurgency. He died eight months before that misadventure got underway, at the relatively young age of 66.

One of my few frustrations with Bar-On’s book was the short-shrift he gave to Dayan’s late awakening on the Palestinian issue. It is true that by the standards of the post-Intifada era, when everyone pays at least lip service to the need for two states, Dayan’s proposals for settling the Palestinian issue sound unrealistic and absurd. But it is still necessary to note Dayan’s growing awareness in his final years that the semi-permanent occupation which was constructed in his image was not sustainable and had to be replaced with something more in line with international norms and long-term Israeli interests. His early death, as well as that of his long-time rival Yigal Allon, just as he too was undergoing something of a late awakening on the same issue, removed a vital voice just when it was most needed. It also pioneered another kind of tragic Israeli character — the establishment figure who suddenly realises the catastrophic implications of Israeli rule in the West Bank and then suddenly dies, is murdered, has a stroke, is convicted of corruption, or forced into retirement. This too, is a quintessentially Israeli character, and another one that Dayan himself invented and personified.

By David Landau
Few individuals have had more impact on the history of the state of Israel than... Read more > Spring 2013

By Colin Shindler
In his autobiography, Chaim Weizmann commented that Theodor Herzl was ‘not of the people’ despite... Read more > Spring 2013

By Alexander Yakobson
The Israel Democracy Institute’s annual survey reveals a gulf between the sentiments of many Israeli... Read more > Spring 2013 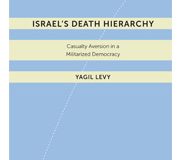 By Avi Kober
This is an excellent account of Israeli casualty aversion by one of Israel’s leading military... Read more > Spring 2013