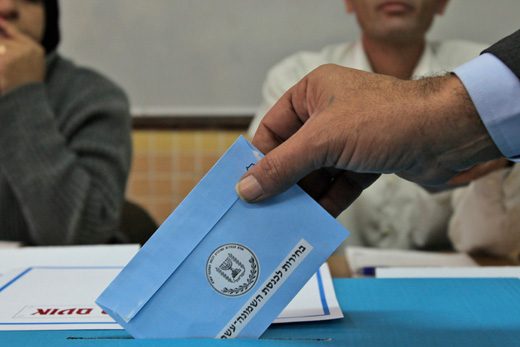 A new study by the Abraham Fund Initiatives is optimistic about the potential to increase Arab participation in politics.

Voting in Arab Society (2012), a study released by The Abraham Fund Initiatives points to a widespread desire among Arabs in Israel to take part in the decision-making process. However, to borrow terms from the business world, the Arab minority wants to be part of the board of directors, rather than a silent stakeholder. As long as this wish for effective participation is not fulfilled, most Arab citizens will continue to feel that voting is worthless.

During the early years of Israel’s existence, voter turnout among the country’s Arab citizens was often higher than that of the general population, attributed by most researchers to the military rule that was in place for Arab communities until 1966. Ever since, and particularly over the course of the last decade, Arab disillusionment with the Israeli political system has risen and political participation has declined, to the point where only 53 per cent of eligible Arab citizens voted in the last election (compared to 65 per cent of the general population), down from 75 per cent a decade earlier.

This decline is a cause for serious concern for those who care about Israeli democracy and about the future relations between Arab and Jewish citizens of Israel. Restoring Arabs’ trust in Israeli political institutions is critical to ensure that these bodies remain democratic and represent the will of the country’s electorate.

The study also found that Arab voters feel deep frustration over their perceived lack of influence on the political direction of their country. Only 46 per cent of Arabs currently believe that voting can impact government decision-making. Of those who voted in the last election, 38 per cent report that they do not intend to vote in the upcoming elections. Their frustration reflects a trend in Israeli politics to marginalise Arab members of Knesset. There is an unwritten rule in Israeli politics that Arab parties are not viable coalition partners, and in Israel’s history no Arab party has ever been included in the government coalition.

Compounding these trends are active efforts on the part of some right-wing politicians to disenfranchise Arab voters. The outgoing parliament broke records in the number of anti-Arab legislative initiatives. Not all of the laws passed, but they shaped the public discourse and caused serious damage to the sense of belonging of Arab citizens. Adding to this are requests to the Central Elections Committee to disqualify two of the principal Arab political parties from running in the coming elections – in the previous elections those requests were approved by the Central Elections Committee and ultimately overturned, unanimously, by the Supreme Court. Though the parties are able to run in the end, the attempt to disqualify them sends a clear message to Arab voters that they are not welcome.

There is an animated debate in Arab society about whether to disassociate from Israel’s governmental system and build an autonomous Arab political system or to realise the full potential of the Arab vote at the polls and creating change from within. The call for separatism is supported by the ‘Sons of the Village’ movement, the Northern Faction of the Islamic Movement, and the Popular Committee to Ban the Elections. It is based on Arab citizens’ perceived inability to affect decision-making in Israel and on their solidarity with the struggle of the Palestinian residents of the Occupied Territories. However, the Abraham Fund report shows that the majority of Israel’s Arab citizens who abstain from voting do so not because of a desire to remove themselves from Israel’s democratic life but because they believe that they are powerless to influence national decision-making. The study shows that only 17 per cent of Arab citizens are boycotting elections on ideological grounds.

The report listened to five focus groups and the opinions of 500 interviewees. The results suggest there are five factors that could increase Arab political participation.

Findings clearly show that placing civic concerns shared by Jews and Arabs at the top of the agenda might encourage Arab citizens to vote. Socio-economic issues, led by education, poverty, crime and violence, were ranked by respondents as the most important issues that need to be addressed (these issues were rated as being of highest priority by 24 per cent, 24 per cent, and 16 per cent, respectively). The Israeli-Palestinian conflict (12 per cent), as well as the tension between Jews and Arabs in Israel (10 per cent), was considered to be of less fundamental importance in encouraging voting participation.

A genuine partnership in decision-making was rated the most effective factor in encouraging voting. The message ‘the more Arab voters there are, the greater their representation in the Knesset’ influenced male and female voters (63 per cent) and non-voters (59 per cent). The scenario that was rated second as a factor that would make voting more likely on the part of this group of voters and non-voters was unification of Arab parties to increase their strength. This also attests to a desire for greater influence on the political system (59 per cent stated that this scenario would increase their likelihood of voting).

When it comes to including the Arab minority in decision-making, the responsibility falls mainly on the Jewish parties. Orni Petruschka, Co-Chairman of The Abraham Fund and Chair of the Israeli Executive Committee, emphasszed the responsibility of the Jewish parties to promote the involvement of Arab parties in the decision-making process: “If Arab voters are convinced that they can influence things, voter turnout rate will increase. The Zionist parties can help, but they make no effort to do so – they don’t appeal to Arab voters and they don’t try to secure their votes.” This statement is reflected in the survey’s findings: 52 per cent said that the scenario of Jewish leaders calling on Arabs to manage the state’s affairs would increase their willingness to vote.

This is not an easy task considering the worrying rise in anti-Arab sentiment in some parts of the Jewish public. In the 2011 edition of the Democracy Index, an annual survey produced by the Israel Democracy Institute, 69.5 per cent of Jewish respondents somewhat agreed or strongly agreed that decisions crucial to the state regarding governance, economy and society should be made by a Jewish majority (and an even greater number said so in regards to security and foreign affairs issues).

The study portrays a complex attitude toward Arab leadership. On the one hand, 30 per cent of the respondents stated that they do not know who they can count on to faithfully represent the interests of the Arab minority in the government. On the other hand, the majority (52 per cent) of the respondents stated that they felt they could count on the following official leadership entities: Arab MKs (30 per cent), Arab parties (9 per cent), Committee of the Arab Heads of Local Governments (8 per cent) and the Supreme Follow-Up Committee (6 per cent).

The entry of young people into party politics would increase the probability of voting among 58 per cent of respondents. More than 70 per cent of the survey respondents agreed with the statement, ‘Women are just as good political leaders as men.’ The possible inclusion of women in political leadership strongly influenced women’s desire to vote, according to the research. In the scenario ‘women will be included in the party you support’, the intention to vote increased among 50 per cent of the women (and 28 per cent of the men). MK Jamal Zahalka (Balad) responded by saying ‘I think it is very important that Arab women are represented in the Knesset. In our party, we are proud that we have achieved this. Also – our young people are no different than the youth throughout the Arab world who started a revolution. I look forward to the emergence of a more capable and complex generation than our own.’

One quarter of the respondents (25 per cent) stated that they do not think Israeli democracy serves their interests as citizens. Participants in the focus groups connected democracy to equality: in the absence of true equality for Israel’s Arab citizens, democracy was viewed as in some sense, not ‘true.’ Some 50 per cent of the survey respondents stated that placing the issue of equality between Jews and Arabs at the top of the agenda of Jewish leaders would increase their probability of voting.

The bottom line? The Arab minority is looking for a “fair deal” with the Jewish public in Israel which will guarantee equality and effective participation in all aspects of life. The question remains whether there are courageous enough leaders, on both sides, to achieve this.

By Amnon Rubinstein
There is a paradox at the heart of human rights discourse – its failure to... Read more > Spring 2013