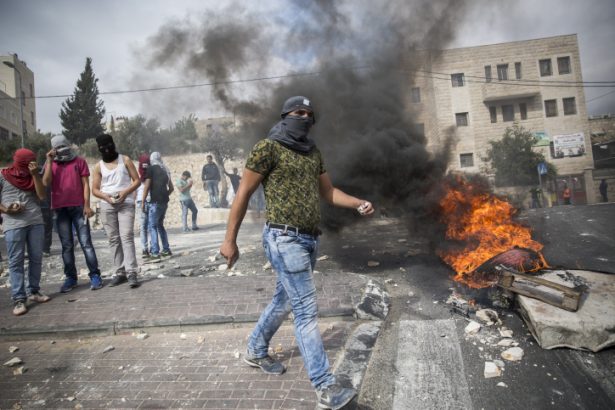 As the British government’s recently launched counter-extremism strategy acknowledges the role of social media in spreading hate, Elhanan Miller looks at the drivers of extremism in Palestinian society through the Facebook pages of Palestinians perpetrators in the recent wave of terror attacks.

For Bahaa Allyan – who boarded a city bus in Jerusalem on 13 October and shot dead two passengers – the struggle between Palestinians and Israelis playing out in Jerusalem was about more than the perceived threat to the al-Aqsa Mosque. It was a battle over narrative.

On 11 October, two days before he boarded that bus not far from his East Jerusalem village of Jabel Mukabber, the 22-year-old graphic designer was frantically trying to defend the reputation of Israa Jabees, a resident of his neighbourhood. That morning, Jabees had been seriously injured setting of an explosion in her car, apparently intended to detonate a gas canister, having been stopped for inspection by Israeli police en route to Jerusalem. Israeli security services reported finding hand-written notes on her person expressing support for ‘martyrs’, and believe she was on her way to carry out a major terror attack in the heart of the Israeli capital.

But on Allyan’s Facebook page, the story was dramatically different. Based on conversations with Jabees’s family members, he surmised that a malfunction had occurred in her car, causing police to mistake her for a terrorist and shoot her ‘in cold blood.’ For the benefit of friends surprised with his sudden transformation into citizen journalist, he wrote ‘I am posting news on my [Facebook] page due to the absence of real media, and also to refute Hebrew media, which some consider credible beyond doubt. Without real media, our truth will be lost.’ Such claims – that Palestinian perpetrators who are injured or killed whilst carrying out attacks are in fact victims of unprovoked assault or murder by Israelis – are common in Palestinian discourse.

For observers of the recent round of violence in Israel and the Palestinian Territories, and increasingly for Israeli security services, Facebook provides an indispensable window into the hearts and minds of Palestinian terrorists. It sheds light on the motivations that caused them to take a knife, gun or car; to kill and often be killed. In the case of Bahaa Allyan, it reveals that he was frustrated not only with Israeli media, but also with the lack of patriotism of his peers.

Allyan blasted the merchants in his village for not shuttering their shops in solidarity with a nationwide strike declared in memory of the Palestinian ‘martyrs.’ He also decried the Palestinian Authority as ‘traitors’ for not cancelling the football league.

Orit Perlov, an expert in Palestinian social media at the Institute for National Security Studies at Tel Aviv University estimates that one third of Palestinians are active on social media. The ubiquity of sites like Facebook and Twitter has brought about a certain democratisation of information, giving a voice to women and youth in particular who have no access to mainstream Palestinian politics.

Teenagers like 19-year-old Muhannad Halabi, who stabbed two Israelis to death and injured two others in Jerusalem’s Old City on 3 October, are inundated with gruesome images of injured Palestinians shot by Israeli soldiers, or violent clashes in and around Temple Mount, known in Arabic as al-Haram ash-Sharif.

Like many of his peers, Halabi used Facebook not only as a means of following news as it broke, through news pages such as Quds News Network (3.6 million followers) or Gaza-based Shehab News Agency (4.1 million followers), but also as a means to express his views without restriction.

Halabi criticised Palestinian President Mahmoud Abbas’s speech at the UN on 30 September, accusing him of accepting the division of Jerusalem between Israel and Palestine, and of renouncing the armed struggle against the Jewish State.

‘Excuse me Mr. President,’ he wrote, ‘but what is happening to the women of al-Aqsa and to al-Aqsa will not be stopped through peaceful measures. We were not raised to be humiliated.’

Like Halabi, Allyan of Jabel Mukaber harboured deep animosity for the Palestinian political leadership. ‘The reassuring thing is that the leaders are out of the equation,’ he wrote on Facebook earlier this month, describing the grassroots character of the current violence. ‘The opportunists and those who love to appear on television will soon be marginalised.’

At first, Israeli Prime Minister Benjamin Netanyahu made little mention of social media’s crucial contribution to the recent spate of violence, focusing instead on incitement by Arab leaders both in Israel and in the Palestinian Territories. But during a Likud party meeting on 19 October, he highlighted Facebook’s role in proliferating violence. ‘What we see here is a combination between Islamic extremism and the internet. Osama Bin Laden meets Zuckerberg.’

The problem with the internet, Netanyahu has already learned, is that it has no physical boundaries, cannot be arrested, and unlike Palestinian President Mahmoud Abbas, cannot be subjected to international diplomatic pressure to tone down incendiary rhetoric. Israel has been monitoring activists on social media and arresting those suspected of inciting violence. But as internet expert Orit Perlov put it, this only made the insidious activity resemble ‘an octopus with tentacles but no head.’

In fact Palestinian politicians, rather than being the leaders of the public mood, are now the ones who are monitoring social media for sources of inspiration and public legitimacy. Jibril Rajoub, a former chief of security in the West Bank and leading Fatah official, praised a Facebook post written by Allyan last year, during an interview on Palestinian television on 17 October. The entry, titled ‘will of a martyr,’ instructed Palestinian factions not to claim responsibility for an attack committed solely for personal, patriotic reasons.

‘This blog entry should become a document taught in school about the meaning of martyrdom and patriotism,’ Rajoub said.

Indeed, more and more Palestinian politicians are using social media to directly convey their message to the public. In many cases, Facebook is the first venue of choice, preceding mainstream print or broadcast media.

Mousa Abu Marzouk, deputy head of Hamas’s political bureau, often uses his Facebook account to explain his movement’s positions. In an 11 October post, he explained why Hamas had decided to refrain from launching rockets into Israel in support of the ‘Intifada’ raging in the West Bank, despite the fact that many social media pages have urged it to do so.

He reasoned, ‘the Intifada will go by without us winning the battle of missiles and [launching missiles] will only portray us as aggressors and them as victims in the eyes of the world.’

A Facebook page claiming to be Fatah’s official platform has been fanning the flames of violence, comparing Israel to the Islamic State and accusing Prime Minister Netanyahu for the burning of the Palestinian Dawbsheh family from the West Bank village of Duma on 31 July. The page also displayed a caricature of a Jewish man being stabbed, with the caption ‘This is Jerusalem, you crazies, beware!’

Finally, the influence of extreme violence currently engulfing the Arab world should not be overlooked when analysing the Israeli-Palestinian conflagration. Over the past five years, Palestinian youth have been immersed in images of Sunni Arab activism in the context of what used to be referred to as the Arab Spring. Images of Arab fighters on the battlefields of Syria, Iraq, Libya or Yemen, glaring from satellite TV news channels and social media websites, have certainly contributed to a Palestinian sense of belligerency. The lone Muslim fighter, a believer taking matters into his own hands in the face of international passivity, has become a ubiquitous role model for many Arabs across the Middle East.

Israel’s struggle to tackle the challenge of hate and incitement shared on social media, calls for a holistic approach. Violent pages should be reported and removed using Facebook’s own guidelines banning hate speech, violence and graphic content. At the same time, decision-makers should not focus solely on the medium, but also consider what it tells us about the political, economic and social climate within which messages of hatred and violence can flourish.