Fathom > Spring 2013 > The making of the law in these parts: an interview with director Ra’anan Alexandrowicz

The making of the law in these parts: an interview with director Ra’anan Alexandrowicz

by Ra'anan Alexandrowicz
BACK

The Israeli documentary The Law in these Parts won the Sundance 2012 World Cinema Grand Jury Documentary Prize and awarded Best Documentary at the Jerusalem Film Festival. It explores the operation of the Israeli military legal system in the West Bank and Gaza Strip after the 1967 War through the testimonies of the military legal professionals who ran it.

In this podcast the director Ra’anan Alexandrowicz discusses his film with Fathom Editor Alan Johnson. They discussed the making of the documentary and his practice as a film-maker, the reaction of the judges to the film, and his attempt to go beyond the tension between human rights and a ‘grey world’ in which some men and women protect us from others who plot terrible violence.

By Dror Moreh
Dror Moreh is the director of the Academy Award nominated Israeli documentary The Gatekeepers, a... Read more > Spring 2013 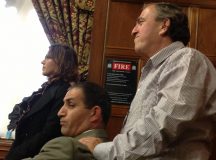 The Making of Within the Eye of the...

By Alan Johnson
Bassam Aramin and Rami Elhanan, a Palestinian and Israeli, were once dedicated fighters willing to... Read more > Spring 2013