The Journey of the Kurds

by Gary Kent
BACK 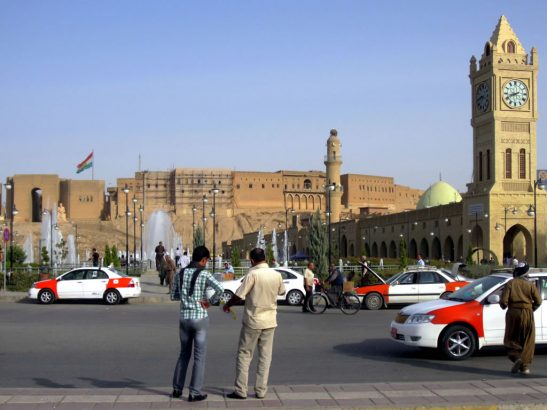 The journey of Iraqi Kurdistan from dictatorship to democracy has been remarkable. Gary Kent reports on the transformation of a people from the repressed objects to the dynamic subjects of history.

Taking my family to Iraqi Kurdistan last year raised the eyebrows of friends who haven’t cottoned on to the fact that it is the safest part of Iraq by a country mile. Getting there has certainly become easier since the 1990s when a long trek through Turkey or a clandestine boat ride from Syria was needed. My first trip was in 2006, travelling through Dubai and finally landing near midnight at a former military airfield in Erbil to a phalanx of television cameras. (Visitors were very unusual.) Our Labour Friends of Iraq delegation stayed at the one five star hotel, where we met union leaders from across the country to discuss how to help revive a once powerful movement. Contact with Britain was by satellite phone, roads were basic, sometimes awful; our drivers bought petrol from boys with jerry cans and sneaked a smoke while circling the cars.

Back then a Communist leader explained the problem for a place emerging from poverty, isolation, sanctions, civil war and genocide: ‘we don’t have a bourgeoisie, can we borrow yours?’ (I paraphrase slightly.) This inspired me to encourage commercial, cultural and political connections between the UK and Kurdistan, and to help form a new all-party parliamentary group. The Kurds welcome external experience and expertise, especially from Britain – English is the second language for many, with two of their 26 universities operating in English. I’ve returned 14 times since, and to see its continuing journey to prosperity, pluralism and democracy has been a privilege.

Now I can fly to Iraqi Kurdistan via Vienna or Istanbul, and direct flights from London may soon make visiting easier still. I touch down at an international airport; the world’s fifth longest runway can take any plane – a strategic bonus for a landlocked place. Smartphones are everywhere and connectivity encourages accountability. The roads have improved – I remember the civic pride when the new underpasses opened in Erbil – but they are congested; there has been a tenfold increase in car ownership and public transport is scant. Erbil is no longer a dusty provincial town but a bustling city thanks to double digit economic growth; living standards are up but so is inequality. Tourist architecture meanwhile is rudimentary. The Kurdistan Regional Government (KRG) is trying to overcome this, part of its plan to diversify the economy. The hope is that western visitors will join the millions of Arabs who already flock to the area to escape the summer heat.

On our family trip last year we enjoyed Erbil’s parks, former military bases turned into the city’s green lungs, and we headed through the mountains to the biggest canyon in the Middle East. I have felt awe at the sight of an ancient monastery on a mountainside commanding panoramic views of vast verdant plains, not far from a Yezidi temple. Erbil has the Citadel, the oldest continuously inhabited city in the world, while the city of Duhok is colourful, cooler in temperature; it is near Almeady where the Magi are said to have begun their journey to Bethlehem. Slemani is the city of poets and culture. But ‘dark tourism’ is also available there at a former Baathist security centre, liberated in a three day fire fight during the Kurdish uprising against Saddam Hussein in 1991. Now a museum, there are rusting Soviet tanks in the courtyard and heart-rending tales of torture, rape and murder inside. The joy on the faces of the guards as they watched Saddam’s trial on live TV remains a powerful image of change for me.

Kurdistan has plentiful oil and gas, long ignored by Saddam, who had enough energy down south to pamper his elite and fuel genocide against the Kurds, repression of the Shias, and aggressive foreign wars. It can now produce more than two million barrels of oil a day, and has a century of gas to exploit, but the challenge is getting it to international markets. The dilemma has driven an historic and little remarked rapprochement with an old foe, Turkey. Prime Minister Recep Tayyip Erdoğan once quipped he would oppose a Kurdistan even if it were in Argentina, and Turkey was once poised to invade Kurdistan – a word that was taboo until recently. Supplying Kurdish energy to Turkey through a new pipeline kills many birds with one stone by boosting Kurdish infrastructure, Turkish growth, European energy security and peace for Turkish Kurds. Yet they know that reliance on oil and gas often blocks economic and political pluralism, and want to learn from oil-rich countries: better Norway than Nigeria, basically.

Kurdistan is clearly the most successful and safest part of Iraq and could be its model and a gateway for foreign investment, most of which already goes to the region whose political skills and economic success have already done much to benefit the south. Kurdish leaders are seeking to deepen the democracy they embraced when Saddam was forced out in 1991. The government has faced an opposition for the last four years, something rare in the Middle East. The trouble is that Kurds are considered inferior by Arab chauvinists in Baghdad, where centralisation rather than federalism remains the default position.

This historic hatred of Kurds resulted in a genocide which peaked in the late 1980s when Saddam slaughtered 200,000 Kurds, razed thousands of villages and used chemical weapons, most notably at Halabja. Many Kurds were herded into euphemistically entitled ‘obligatory collective villages’ – concentration camps – as vast areas of the countryside were made uninhabitable. New mass graves are regularly uncovered; as one official put it, ‘there is another Iraq under Iraq.’ Many widows cannot be certain their menfolk are dead and wait in agony. I am always struck by the stoicism and dignity of the survivors. Generally, the Kurds don’t want to be defined by their tragic past, though it affected everyone, directly or indirectly. However, formally recognising the genocide would help the Kurds to escape from its shadow as well as increasing the chances that it will never happen again.

Kurdistan is Muslim but generally secular, valuing tolerance. A quarter of a million have escaped there from Syria. Christians fleeing from the Iraqi south often head to the Christian enclave of Ankawa in Erbil. Ethnic and religious minorities have 10 per cent of parliamentary seats. Jews were once about 17 per cent in Slemani, where the Jewish quarter is preserved, but the Jews left in the 1940s and 1950s. In Barzan – the home town of the Barzani clan from where Saddam abducted and murdered 8,000 men and boys – ­I bumped into a group of visiting Kurdish Jews from the 120,000 strong community in Israel. Foreign policy is decided by Baghdad but Masoud Barzani, President of Iraqi Kurdistan, told one of our delegations that if Israel is recognised there would be a consulate in Erbil the next day.

Kurdistan still has many deep-seated problems. The economy remains state-heavy and the private sector, despite some growth, is weak. A once-concealed problem of high levels of female genital mutilation (FGM) has shocked leaders, who are combating it with some success. Electricity and power run almost 24/7 but health services can be ropey, with hidden problems of mental illness and disability; I have seen perhaps five wheelchairs in eight years. Education encompasses a third of the population but needs to be improved in quality and to overcome the old habits of learning by rote and from the top down. Several journalists have been murdered and this has been strongly condemned by Kurdish leaders. Much of the media needs to be put on a more professional basis. One change for the good is the growth of the Rudaw group (for which I write a column) with TV, Radio, and Kurdish and English print outlets which are seen as more reliable. Also, the emergence of the first ever Kurdish think tank is a good sign of a developing civil society, though it remains a work in progress.

The Kurds have long said that they have ‘no friends but the mountains,’ where they have often fled for sanctuary. They live in a tough neighbourhood. But if the Kurds play their cards right, they can turn oil and gas into a boon that benefits all, becoming a dynamic subject rather than a repressed object of history. 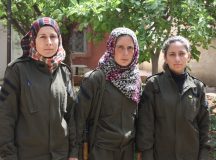 By Jonathan Spyer
Jonathan Spyer is one of the few policy experts to regularly visit the front lines... Read more > Spring 2014

By Matthew Levitt
The radical Shiite Lebanese organisation Hezbollah may be best known for its armed activities, but... Read more > Spring 2014

By Jonathan Spyer
The end of the Assad regime will probably not mark the end of the civil... Read more > Spring 2014

By Shashank Joshi
Ties between the two countries will be repaired, but not restored anytime soon. Turkish Prime... Read more > Spring 2014