IsraelVotes2019 | The growing power of the ‘independent’ ultra-Orthodox voter

by Gilad Malach
BACK 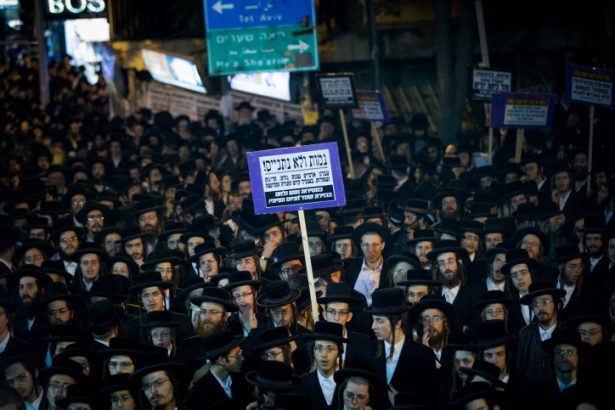 Ultra-Orthodox Jews attend a protest against the draft bill in the Mea Shearim neighborhood, in Jerusalem, 5 July 2018. Photo by Yonatan Sindel. Flash90.

Dr. Gilad Malach is head of the ultra-Orthodox program at the Israel Democracy Institute in Jerusalem. In a conversation with Fathom Deputy Editor Calev Ben-Dor, Malach discusses the recent changes that have taken place in ultra-Orthodox society, voting trends within the ‘sector’, and how the onset of technology is affecting voting patterns.

Calev Ben-Dor: What size is the ultra-Orthodox population in Israel? And what sort of changes have taken place within ultra-Orthodox society in recent years – what are the big underlying trends?

Gilad Malach: There are approximately 1 million ultra-Orthodox in Israel, comprising about 12 per cent of the population. Their growth is around 4 per cent each year, in comparison to 1.5 per cent for the rest of Israeli society. Historically, some elements of behaviour among the ultra-Orthodox, such as their low levels of higher education and low participation in the work force, were considered less important because they constituted a small proportion of the population as a whole. But these topics have now become increasingly more important for Israel’s future prosperity.

One unique component to Israeli ultra-Orthodoxy – rather than their English or American counterparts – is that most men study religious texts for their entire lives rather than work. In 2003, the ultra-Orthodox male participation in the work force was around 35 per cent (compared to 85 per cent in male population as a whole). And even those who did work often earned less money because their secular education was lower.

However, many changes have taken place over the last 15 years. Children allowances were so high before 2003 that families with seven children received the equivalent of a salary from the government. But cuts in these allowances has meant that many ultra-Orthodox families are unable afford to rely on the state and have entered into the labour market. Today around 50 per cent of ultra-Orthodox men are working, while the rates for women has also increased. In 2003 just 51 per cent of ultra-Orthodox women worked, whereas today that number is 76 per cent, a similar number to the rest of Israeli society.

CB-D: If the ultra-Orthodox population is growing at a much faster rate than the rest of Israel, why are the number of seats that United Torah Judaism (UTJ) and Shas are receiving staying the same? Who is voting for these parties and do ultra-Orthodox vote en-masse? Has there been a change?

GM: For many years, Shas was a much larger party than UTJ. In the 1990s Shas got 17 seats in 1999 but today have seven and they are currently polling four to seven seats. They are in decline. But unlike UTJ, for many years Shas was getting most of its support from non-ultra-Orthodox voters – traditional, religious and some secular Israelis with Mizrachi origins who felt connected to the charismatic Rabbinical leader Ovadya Yosef. When Yosef passed away, Shas’ support fell and it continues to fall. Today most traditionally-religious voters don’t feel they are connected to ultra-Orthodox parties. Rather, they feel they have other options, which are more modern and Israeli that better reflect their identity.

UTJ is faced with a different situation. The mainstream ultra-Orthodox voter group is smaller than it used to be. On the one hand, around 20 per cent of those who identify as ultra-Orthodox say they will not vote for an ultra-Orthodox party. Instead, they vote for right-wing parties. This phenomenon didn’t exist 20 years ago. In addition, there are about 15 per cent who simply boycott elections. This group has recently doubled and is joined by a group known as the ‘Jerusalem faction’. So UTJ have lost voters from some who no longer vote sectorally and from others who boycott elections completely.

Also, since the 1990s more than 1 million people immigrated to Israel, especially from the former Soviet Union, and this has diluted the relative size of the fast growing ultra-Orthodox population.

GM: For years many ultra-Orthodox voters would vote for the party that their Rabbis told them to vote for. However, all the great Rabbis who made up the leadership of the ultra-Orthodox – among the Lithuanian stream, the Hasidic stream, and the Sefardim – have passed away and the current leaders aren’t as influential. So in the recent municipal elections, we saw the growing power of the ‘independent voter’. This change is also connected to technology and access to knowledge being much more readily available. When people read on the internet about all the political infighting behind the scenes, they see how leaders are often manipulated by younger political advisors and conclude that even if they adore their Rabbis, they don’t feel the need to obey the whims of their Rabbis’ advisors. The percentage of ultra-Orthodox who use the internet is growing rapidly and now stands at around 50 per cent. In fact, you can divide up ultra-Orthodox society between those who uses the internet, and those who don’t yet use the internet. And once an individual begins using it they have new access to knowledge.

CB-D: Many people generally divide Israelis along the Right to Left spectrum based on their positions on national security issues. To what extent can ultra-Orthodox voters be described as right-wing or left-wing?