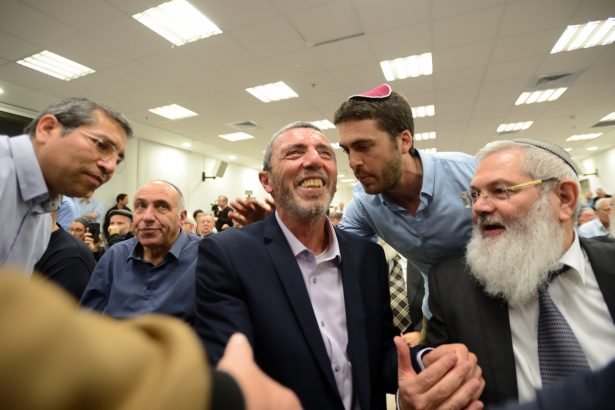 Professor Colin Shindler argues that pragmatism by a Right wing government has often led to an ideological schism towards the far Right, and evaluates the recent merger between Jewish Home, National Union and Jewish Power that was ‘midwifed’ by Prime Minister Netanyahu.

The Genesis of the Likud

The so-called father of the Zionist Right, Vladimir Jabotinsky, had been the head of the Revisionist Zionists, the Betar youth group and the Irgun Zvai Leumi in the 1930s. All had different political agendas. The charismatic Jabotinsky was adept at addressing different audiences in different voices. With his death in August 1940, there was no restraining hand. The Irgun split into two factions – one which wished to continue the war against the British, the other which wished to fight with the British against the Nazis. The former, led initially by Avraham Stern, emerged after his death as Lehi (the Fighters for the Freedom of Israel). Yitzhak Shamir became the chief operations officer. The other faction of the Irgun was taken over in 1943 by a leading Betar maximalist from Brest-Litovsk, Menahem Begin, who disagreed with Jabotinsky on fundamental questions such as the armed struggle and national liberation as well as the wisdom of negotiating with the British. On the day following Israel’s declaration of independence in May 1948, Begin announced that he was following a political path – and that the Irgun would become the Herut movement.

By 1973, Begin had painstakingly constructed an umbrella organisation, the Likud, during three decades of opposition to Labour hegemony. It consisted of Herut loyalists, general Zionists and defectors from Labour. Once in government, Begin’s grand coalition of the Right began to disintegrate as soon as political decisions had to be made. The Foreign Minister, Moshe Dayan, and the Defence Minister, Ezer Weizmann, resigned in the aftermath of the Camp David accord, when it became apparent that Begin had abandoned pragmatism and was uninterested in resolving the Palestinian question – he only wished to achieve a bilateral agreement with Egypt.

Even so, within Herut’s ranks, there had previously been dissension and disquiet about Begin’s willingness to return territory to Egypt and to consider Palestinian national rights. Only 57 per cent of Herut members of the Knesset voted for Camp David while loyalists such as Yitzhak Shamir and Moshe Arens refused to side with Begin. Long time comrades from the Irgun and Poland began to oppose Begin. Haim Landau, from Krakow, originally brought into the cabinet as a safe pair of hands, proved to be a rallying point for Begin’s critics.

In March 1979, following the signing of the Israeli-Egyptian peace treaty, the former president of Tel Aviv University, Yuval Ne’eman, announced that he was forming a new party. Tehiya became the first party of the far Right. It won only three seats in the 1981 election and was strongly supported by the West Bank settlers. However, its establishment formulated a pattern such that whenever the Right in government had to make a pragmatic decision, there would often be an ideological schism towards the far Right.

During the 1980s, the possibility of resolving the Palestinian question catalysed the formation of other far Right parties such as Tsomet, Morasha, and Moledet – which was enthusiastic about transferring Palestinian Arabs out of the territory. All wanted the expansion of settlements and the annexation of part – and often all – of the West Bank.  Ideologically these parties traced their origins back not only to the Likud, but also to Labour and to the National Religious Party.

The Road to Power

By the early 1990s, such far Right parties sat in Yitzhak Shamir’s government and were supported by Ariel Sharon as a means of bolstering his own opposition to the Likud leadership. This proved to be a feature of subsequent Likud governments. When Netanyahu became Likud leader in 1992, Sharon attacked him from the far Right. When Sharon became prime minister a decade later, Netanyahu moved to criticise him from a similar position. Yet all Likud prime ministers, Begin, Shamir, Sharon and Netanyahu feared being outmanoeuvred by small parties on the far Right.

However, the far Right grew in strength due mainly to the rise of Palestinian Islamism and its propagation of suicide bombing in the wake of dashed hopes for peace.

As soon as there was any semblance of violence in the Middle East, the Israeli electorate accelerated to the Right. The combined effect of Hamas in power in Gaza, the advance of Iran towards the northern border, the Syrian tragedy and the general instability in the Arab world persuaded many Israelis to place their trust in the far Right, in figures such as Naftali Bennett and Avigdor Lieberman. Any space for dialogue with Palestinians has been closed off.

Netanyahu recognised this situation and brought the far Right into his various administrations while practicing the politics of stagnation. Such stasis has been enhanced by the political disarray in the US and Europe. The economic woes of the West have been broadly avoided in Israel – although the gap between the haves and the have-nots has widened.

Such stability amidst international unrest has allowed the far Right to use its position in government to attack bastions of democracy such as an independent judiciary, free debate in academia and artistic endeavour in the arts world. It has even castigated the Jabotinsky wing of the Likud for its liberalism while purporting to be the heirs of this founder of the national camp. It has criticised Netanyahu for not accelerating the settlement drive on the West Bank.

Its presence in government has proved to be an obstacle to any pragmatic political initiative by the Likud such as those conducted by Begin at Camp David (1978) and Shamir at Madrid (1991). Netanyahu’s attempts at forge agreements – Hebron (1997) and Wye Plantation (1998) – brought him opprobrium both from within the Likud and the far Right and defeat at the polls in 1999. He took to heart the lessons learned from his near political demise.

Netanyahu’s isolationist mindset together with the growing power of the far Right has psychologically affected the public mood whereby moral behaviour in public life counts for little and spiritual leaders remain silent on corrupt practices. There was indeed no sense of shame within the Likud and sections of the Israeli Right that Otzma Yehudit, the latest reincarnation of Kahanism, should join the Habayit Hayehudi/Tkuma list. However clearly Netanyahu did not bargain for an eruption of outrage from many orthodox figures. In a Shabbat sermon, Rabbi Benny Lau, compared the views of Otzma Yehudit to those of Nazism – and has subsequently been served with a NIS 100,000 lawsuit for slander from one of its candidates in the election.

In a political sense, Netanyahu believed that he should be the midwife of this ‘Union of Right Wing Parties’ (URWP) in order to cement his ability to form a future coalition with the far Right. Another far Right group, Ahi, will run with the Likud. Eli Ben-Dahan, a former deputy Defence Minister, known for remarks about Palestinians – ‘they are not human’ – is number 28 on the Likud list. Zehut, yet another far Right group, led by Moshe Feiglin, once a major activist in the Likud, promises to return the IDF to ‘its original pre-Oslo mentality’. Feiglin was banned in March 2008 from entering Britain by the then Home Secretary, Jacqui Smith, for fear of provoking hatred which could lead to ‘inter-community violence’.

Following the Attorney General’s decision to indict Netanyahu for bribery, fraud and breach of trust in three criminal cases on 28 February, it is likely that the Likud will lose support amongst voters and fall further behind Benny Gantz’s Kachol Lavan (Blue and White). Preliminary polls suggest that Netanyahu’s indictment will also increase support for far Right parties, the URWP and Naftali Bennett’s HaYamin HaHadash (The New Right).

The problem for all parties in the 2019 election – outside of the two major blocs of the Likud and Kachol Lavan – whether Right or Left, is whether they can pass the threshold of 3.25 per cent. This is the great unknown. The far Right may succeed while parties such Meretz, Gesher and Kulanu may falter. If all the far Right parties including the haredim do cross the line, then they may have slightly greater representation in the Knesset than previously – albeit through a redistribution of seats due to splits and coalescence. If the Centre and Left parties fail to cross the line, then Gantz will find it hard to form a coalition. As in 2009, when Tzipi Livni’s Kadima attained the greatest number of seats, the far Right, preferred the loser in the contest, Netanyahu – the same may happen again a decade later if the far Right, fortified by the followers of Rabbi Meir Kahane, effectively holds the balance of power.