by Jonathan Cummings
BACK 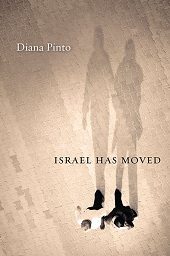 According to Michel Foucault, the French philosopher, the essence of modernity can be understood in the way in which a doctor looks on his patient. The clinician’s gaze is a penetrating, scientific insight. Unlike their faith-healer predecessors, who muddled body and soul in their attempts to heal, we moderns seek to fully understand what we see.

Diana Pinto, an intellectual historian and policy analyst based in Paris, possesses such a modern view of the world. Her book, Israel Has Moved, attempts to peel away the many accreted layers of muddle to really understand modern Israel. No, she tells her taxi driver, she is not a newcomer to the region, but her view is that of a detached observer, not an intimate or an ally. She is Jewish, but she is – in her own words – not a Zionist. Her insider-outsider’s insights, written after a pair of almost consecutive recent trips to Israel in the summer of 2012, are therefore a vivid travelogue written by an intelligent and inquisitive gazer-on-Israel. It is rich with detailed observations and a keen desire to understand the country and its people.

Some of her snapshots – the Old City of Jerusalem, the duty-free shop at Ben Gurion Airport, the cafes and restaurants of Jerusalem’s German Colony – are the standard fare of tourist itineraries, and reveal little new. Others, including her musings on the difference between two roads, the alternative routes that connect Jerusalem and Tel Aviv, are more engaging. Given more time, I’d like to think she might have deviated from those two cities and the roads between them. She would certainly have found much to grapple with by doing so.

Pinto’s key observation – and indeed the title of the book itself – is that Israel has broken the shackles of its troublesome location in the Middle East and now exists in a virtual world more to its liking, inhabiting ‘its own cyberspace at the very heart of a globalized world with increasingly Asian connotations.’ Israel has packed its bags and moved on. This is as clear an articulation of a post-modern interpretation of Israeli history as you are likely to hear: having adopted nationalism to achieve its aims, Israel has now cast off its spatial dimensions to be a utopia, ‘in the literal sense of non-place.’

It is true that Israel has yet to determine its internationally recognised borders. When relations with its neighbours are not explosively violent they are coldly non-aggressive. Many Israelis live in a bubble that insulates them from their immediate surroundings, oblivious to the lives of Palestinians, Egyptians, Jordanians, Lebanese and Syrians over a real or imagined border. Even so, it is fanciful to suggest that Israel has removed itself in a meaningful way from its geographical location: ‘Israel, therefore, continues to live exactly where GPS situates it,’ she concedes.

Her claim that Israel has not managed to acquire the ‘grammatical syntax’ required to integrate into the region is also overstated, claiming that its people remain stuck in a Diaspora mentality of powerlessness. This ignores the unlikely success of a modern nationalism that successfully campaigned for Jewish independence, and it ignores the failures of Israel’s neighbours to adapt to the reality of Israel’s existence.

Pinto’s most arresting passages are those that describe Israel as autistic, closed off from its surroundings, and unable – or unwilling – to find any commonalities with its neighbours. This is no slip of the pen: she talks of Israel as ‘the autistic with Asperger syndrome, the bipolar, the schizophrenic, the paranoiac, the psychotic, and even the psycho-rigid: in other words, an entity that denies the very principle of reality.’ Terrifying terms, she concedes, hastening to add that they are not her own. Israelis of all sorts used them in front of her as self-evidently true.

The tendency of Israelis to self-diagnose as autistic, she decides, is a natural reaction to the giddying swings of euphoria and deep depression of contemporary Israeli life. Autism is a welcome insulation from the outside world, a justification for continuing the separateness which characterised Diaspora Jewish life. ‘Autistic personalities rarely dialogue,’ she states. It would be interesting to consider the last two decades of peace talks with the Palestinians – notably absent in this book – in that light.

Some of the book is disappointingly thin, though. If Israel has moved – by which she really means that some Israelis are part of the modern global economy which transcends national boundaries and physical geography – it leaves behind some who remain sadly earth-bound. What of them? Her plea for Israel to return ‘to its earlier modesty and its humanistic values, before it’s too late’ is oddly discordant.

Happily, this is a difficult book to pin down. In the conveyor belt of writing about Israel and Israelis, it isn’t easily categorised. It is not a polemic, either of the celebratory or the accusatory kind. It isn’t a history, nor is it an Innocents Abroad travelogue. Its vignettes animate its thought-provoking, if not absolutely convincing, central theme; that Israel has magically, like Elvis, left the building. This is a book for those looking to think hard about Israel as it is, rather than as people would like it to be. At its best, it offers some novel and challenging ideas to grapple with.

By Liam Hoare
Israel, as Amos Oz once observed, was born out of a spectrum of dreams and... Read more > Spring 2014

By Colin Shindler
In his autobiography, Chaim Weizmann commented that Theodor Herzl was ‘not of the people’ despite... Read more > Spring 2014

By Alan Johnson
The cultural theorist Judith Butler has written what she intends as a critique of Zionism... Read more > Spring 2014

By Michael Walzer
Michael Walzer is one of America’s foremost political thinkers. A professor emeritus at the Institute... Read more > Spring 2014