Finding the Words: a review essay 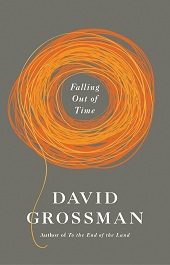 When Ora’s son, Ofer, is called up for military service in order to take part in a sudden offensive, she becomes overpowered by a fear of bereavement, terrified of sounds and shapes that might be the army ‘notifiers’ coming to her door with the worst possible news. She decides to take flight. ‘She has to obey this thing that instructs her to get up and leave home, immediately, without waiting even one minute. She cannot stay here.’ When the taxi driver asks whither she wishes to go, Ora replies, ‘To where the country ends.’

David Grossman’s To the End of the Land, published in 2010, is a novel in which the protagonist runs from grief, or rather, from the prospect of grief. By contrast, his latest work of fiction, Falling Out of Time, attempts to do what François de la Rochefoucauld once claimed is unfeasible: to look at death steadily. Falling Out of Time does not run from grief – it is a direct confrontation with grief.

Over dinner, a man Grossman names the Walking Man looks up at his wife. ‘I have to go.’ ‘Where?’ she asks. ‘To him.’ ‘Where?’ ‘To him, there.’ As they begin to recover the capacity of speech, having been struck dumb by sorrow, the wife exclaims, ‘But what is there? There’s no such place. There doesn’t exist.’ ‘Maybe he’s waiting for us,’ the Walking Man says. ‘He’s not,’ she replies. ‘It’s been five years and he’s still not. He’s not.’

But the Walking Man does leave, pacing in ever-widening circles around the unnamed town in which they live, which itself seems to have fallen out of time and place. As the narrative progresses, in step with the Walking Man’s movements, he is joined in his quest by kith from the village, each of whom is carrying their own burden or loss – the Net Mender, the Midwife, the Elderly Maths Teacher, the Duke. They come to form a chorus as they walk together in pursuit of ‘there’, whatever ‘there’ might be. ‘If only we could speak to them, we thought, we’d tell them everything we did not say when they still lived.’

It is hard to describe the shape of Falling Out of Time. Abstract with only two locations – here and there – it is written as a libretto within which the speech moves between poetry and prose. The poetry itself occasionally has remarkably short lines, only one or two stresses, as if to echo the rhythm of walking. The translator, Jessica Cohen, tasked with the almost impossible does a remarkable job rendering this highly unusual work into English, with great sensitivity and without losing the essence of the piece.

Given its structure, it would be tempting to compare Falling Out of Time with Amos Oz’s 1999 novel The Same Sea, which blended narrative prose, free verse, and rhyme and meter. But The Same Sea spanned from Kathmandu to Bat Yam, with Oz composing in a lyrical and mysterious style, rich with biblical allusions and references to rabbinic writings and modern Hebrew literature. It was an exercise of shameless artistic expression, with Oz even appearing as a character in the novel named the Narrator. Falling Out of Time, on the other hand, takes the form it does almost out of necessity. ‘Poems suddenly tumble out of my mouth,’ the walkers say. ‘Poetry is the language of my grief.’

And it is Grossman’s own grief. On 12 August 2006 – while Grossman was writing To the End of the Land – his son Uri was killed in southern Lebanon while serving in the Armoured Corps during the final hours of the Second Lebanon War. His tank was hit by a rocket while trying to rescue soldiers from another tank. All of the members of Uri’s tank crew were killed in the incident.

‘I must recreate it in the form of a story! Do you get

that? It, you idiot! The thing that happened!

What’s not to understand? It! The sonofabitch

thing that happened to me and my boy. Yes –

mix it into a story is what I need to do, have to

do. And it must have plots! And imagination!

And hallucinations and freedom and dreams!

And so he does. In order to give expression to his grief, Grossman has crafted a work that is fundamentally different not just from To the End of the Land – a very Israeli novel which is not only about Ora’s experience but war, history, politics, and the land itself – but also any of his other novels. Falling Out of Time is extraordinary – Grossman’s poetry and prose are well commanded, remarkably spare and precise, the voices personal, the emotions clear and deep, almost too much to take. It is a masterpiece which demonstrates what it is possible to convey with the minimum of words.

‘Yet still it breaks my heart, my son,’ the Centaur concludes, ‘to think that I have – that one could – that I have found the words.’

While Falling Out of Time is rich but terse, specific with its words, two other new works of Israeli fiction unapologetically sprawl across the page.

Neuland – the latest novel by Eshkol Nevo, grandson of the former Prime Minister of Israel Levi Eshkol and the author of Homesick and World Cup Wishes – weaves an adventure and love story between two Israelis, who find themselves in South America for different reasons, betwixt two larger stories about Jewish wandering.

‘For the entire time he was preparing for the trip, Dori hoped with all his heart that he wouldn’t have to go.’ Dori’s father has gone missing in South America, and it is Dori who has been tasked with recovering him, leaving behind his wife and son. On the trail, Dori encounters Inbar, who herself has left Israel in order to flee the grief set on by her brother’s death and a boyfriend she does not love. Between Dori and Inbar, love encroaches at precisely the wrong time.

As the novel develops, Dori and Inbar’s South American journey entwines with a plot involving backpackers who have founded a new colony of Israeli Jews in Argentina called Neuland, with the intention of returning to the original values of Theodor Herzl. Neuland, thus, is a manifestation of the divergence between Herzl’s vision and the realities of statehood. From a distance, it becomes possible for Nevo’s characters to gain fresh perspectives on the meaning of homeland, raising both questions and answers. ‘Can it be that the Jews’ tendency to wander in order to “escape the famine” is really stronger? Or have they been compelled to fulfil time and time again the human desire to wander, even though they have tired of it?’

Recently published in paperback, Zeruya Shalev’s fourth novel The Remains of Love opens on Hemda Horowitz, living alone in the smallest room of her miniscule apartment, confined to her bed. ‘The remains of life, that is, the last remnant of the portion of time allotted to her, in some absurd fashion feels like eternity – being in such a state of immobility, it seems it is stretching away into the infinite.’

During these final days of her life, memories and shards of Hemda’s life pass through her consciousness. She recollects her childhood on the kibbutz, how after ‘all gathered in the dining hall to see her take her first steps,’ she refused to walk for two whole years – ‘until the age of three she was carried around like a cripple.’ She remembers her father the fisherman, who worked the lake and as a parent was stern and disciplined, and the absence of her mother. She recalls the traumas of her childhood.

Moving around Hemda are her children, Dina – the child she believes she did not love enough, a mutual feeling that in turn informs Dina’s bond with her own daughter – and Avner, a human rights lawyer, unhappy in marriage. ‘He feels a pang of fear at the thought that his mother might be going to the world hereafter sometime in the next few hours, leaving him without so much as a morsel of the supposed protection that she has provided. A man without parents is more exposed to death, he thinks.’

The Remains of Love thus examines the approaching death from both sides. All are dragged back into the past: for the parent, it is about what one remembers, wants to bequeath, wishes one could have changed; for the child, the loss is shattering and revolutionary, a time of re-examination. 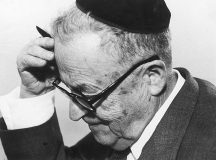 By Noga Emanuel
As the spiritual bedrock of Judaism, Jerusalem had been a magnet for millennial longing. For... Read more > Spring 2014

By A.B Yehoshua
An extract from a play by A.B. Yehoshua. Translated by David Janner-Klausner and adapted for... Read more > Spring 2014