Fathom > Summer 2013 > Can the new Knesset fix the old problems? 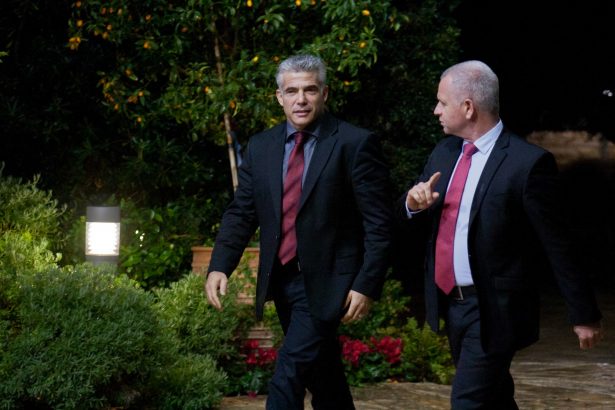 Yair Lapid, leader of Yesh Atid, is excorted into the President's Residence and into the new government. Nir Alon / Demotix / Press Association Images.

The chances of the new Knesset fulfilling its promise of ‘new politics’ will depend upon its ability to get rid of the old occupation, argues the Director of OneVoice Israel.

The Israeli economy needs retooling. There is a growing segment of the population who refuse to move into competitive education and employment, labour productivity is alarmingly low, and the cost of living is rising. Israel has received alarming ratings for market concentration and income inequality, while the soaring house prices that spurred unprecedented demonstrations in 2011 remain high. (It takes 276 monthly salaries for the average Jerusalemite to purchase an apartment.)

All parties understand that this is unsustainable, but there is little agreement about how best to respond. The new Knesset is divided between those who support neo-liberalism and free markets and those in favour of a version of the social democratic welfare state. Significantly, the first are in the coalition, while the latter sit in the opposition. Yair Lapid’s party now holds the keys to the ministries of finance and education, giving it the power to make profound changes in the short and long term. Moreover, being relatively new on Israel’s political scene, Yesh Atid is free from the influence of the vested interests, whether unions or tycoons.

Israel’s first great political challenge is to begin to heal the divisions between different parts of our society. The ultra-Orthodox, the national-religious, the Palestinian citizens of Israel, and the secular elite are just some of the groups that educate their children separately. Once out of education some of these groups barely interact, in military or civil service, or in the job market. The 19th Knesset has an opportunity to build much-needed bridges and introduce greater cohesion into Israeli society, not least by recruiting the ultra-Orthodox into equal compulsory military or civil service, and then encouraging them into the job market.

Israel’s second great political challenge is to maintain our democratic and liberal freedoms. These were the trademarks of Israel at its birth, but came under threat from illiberal legislative proposals in the last Knesset. With the Likud having shifted further to the right in its recent primaries, and following the rise of Naftali Bennett’s Jewish Home party, some fear more discriminatory bills may be proposed. However, Tzipi Livni, the new Justice Minister, will also serve as the chair of the ministerial committee for legislation and is committed to the protection of democratic and liberal values. The left will need to play an active role in defending Israel’s democracy, and in responding to any attacks on the Supreme Court, minorities, refugees, and foreign workers. In this regard, the strengthened position of Meretz and Labour, who both won back seats lost in the previous Knesset to Kadima, is significant.

Israel’s diplomatic challenge is, of course, to make progress in the Israeli-Arab peace process. But any progress would potentially bring the left and the right of the coalition to a showdown. When the occupation finally demands attention – whether through a peace plan proposed by US Secretary of State John Kerry, another move by President Abbas at the UN, or a third intifada – the unity of the coalition itself will likely come under a huge strain.

Netanyahu’s conservatism – the former government muddled through four years of settlement expansion, while blaming the Palestinians for the freeze in peace talks – is in tension with a Knesset majority in support of the two-state solution. Livni’s official role and extensive mandate to lead the peace process will likely clash with Defence Minister Yaalon and his agenda to ‘manage the conflict’. Yair Lapid, the new Minister of Finance, may eventually have to choose between his coalition partners from the Jewish Home party, Naftali Bennett and Uri Ariel, former heads of the Settler’s ‘Yesha’ Council, and his own party members who mostly have a dovish, if pragmatic, approach to the conflict. In another development, the ultra-Orthodox parties, who are now in opposition, are moving leftwards and campaigning against settlement policies.

Civil society will also play its role in advancing peace. The OneVoice Movement will continue to work in the Knesset through its caucus for the two-state solution. But we also need huge efforts on the part of ordinary Israeli citizens, and the younger generation in particular. In his speech to an audience of Israeli students in Jerusalem in March, President Obama reminded us of the meaning of people power: ‘Speaking as a politician, I can promise you this: political leaders will not take risks if the people do not demand that they do. You must create the change that you want to see.’ Those who successfully led the mass demonstrations for social justice just over a year ago can now become catalysts for a breakthrough to real peace and security for Israel.

The ability of the new Knesset to make progress on these economic and political challenges will be contingent upon its ability to make diplomatic progress towards peace with our neighbours. Yair Lapid became the leader of the second biggest party in the Knesset by asking ‘Where is the money?’ With a defence budget five times larger than the OECD average and an enormous unfulfilled potential for trade with the Arab and the Muslim world, ending the conflict has to be part of the answer. The chances of the new Knesset fulfilling its promise of ‘new politics’ will depend ultimately upon its ability to get rid of the old occupation.

By Benedetta Berti
Relations between Egypt and Hamas have improved under Morsi. But he has issued no blank... Read more > Summer 2013

By Alex Brummer
From reforming the banks to the crisis in the Eurozone, from increasing Haredi employment to... Read more > Summer 2013

By Tali Nir and Marc Grey
How much social justice can we really expect from the Nineteenth Knesset? The Association for... Read more > Summer 2013