Book Review | Ben-Gurion: His Later Years in the Political Wilderness 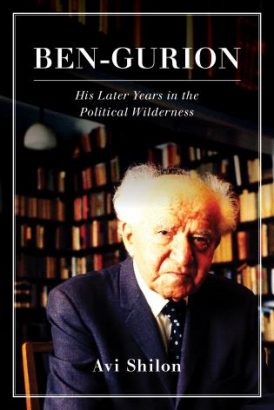 This latest work from Avi Shilon describes in detail Ben-Gurion’s last decade – from stepping down as prime minister in June 1963 until his death in December 1973. They were not glorious years and were peppered by anger, bitterness, disputation and disagreement. Throughout his life, he had never bowed to convention, spoke his mind using outrageous language and harboured grudges for an eternity.

When prime minister Levi Eshkol died suddenly in 1969, Ben-Gurion refused to go to his funeral. Eshkol had been Ben-Gurion’s successor in 1963. Shilon describes this act as ‘a combination of insensitivity, stubbornness and rare honesty’. It demonstrated once more Ben-Gurion’s reputation as a man of extremes – someone who could rationally justify his hate and act accordingly. Ben-Gurion named a stray dog at his kibbutz Sde Boker, ‘Eldad’ after the far Right ideologue, Israel Scheib who was known as Israel Eldad in the Lehi underground in the 1940s.

Ben-Gurion thought that he would be able to control the often bumbling Eshkol from his kibbutz at Sde Boker – just as he had attempted to control Moshe Sharett ten years before. If, in Ben-Gurion’s eyes, the state was not being guided correctly, he would step in to make the adjustment. The guide should either be himself or someone who would do his bidding. In Eshkol’s case, there were two issues. First, a refusal to visit the Lavon affair. Ben-Gurion seemed almost obsessed by the Lavon Affair in which members of Zionist youth had firebombed American libraries in Cairo and Alexandria. Although little damage was caused, the fiasco ended in arrest, torture, incarceration and the execution of two trial defendants. But who had given the order for such a disastrous operation? Pinhas Lavon, the Minister of Defence, resigned amidst controversy and protested innocence. It became the subject of numerous official inquiries in Israel. Second, the return of Ze’ev Jabotinsky’s remains from New York, which Ben-Gurion believed would legitimise the nascent Right. Unexpectedly the mild-mannered Eshkol refused to bend to Ben-Gurion’s will.

As Prime Minister, Ben-Gurion had opposed the exclusion of non-socialist parties from government coalitions because he feared that they would be cultivated and captured by Menachem Begin. This was a factor behind his desire to block an alignment between Mapai and Ahdut Ha’Avodah at the Mapai conference in 1965. Instead, as Shilon describes, the conference turned into a reaction against the years of accumulated resentment. A wheelchair bound Sharett, dying from cancer, denounced Ben-Gurion in no uncertain terms:

The movement should be inspired by the leader, but the leader cannot outstrip the movement, freeze its thoughts and enforce his own personal opinion by relying on his own enormous authority.

Sharett said that it was Ben-Gurion’s unremitting insistence that he was always right that caused offence. Ben-Gurion had simply desecrated the very notion of leadership and thereby undermined the prestige of the state. Even loyalists such as Golda Meir had reached the end of her tether. Ben-Gurion wrote his diary that the ugliest manifestation at the 1965 conference was ‘Golda’s poisonous speech’. A pained Ben-Gurion wondered where all ‘the hate and venom’ had come from. Despite their respect for his past leadership, Sharett was heard in respectful silence when he mocked Ben-Gurion’s ability to predict events. Ben-Gurion, at 80, was no longer seen as infallible and god-like. People were prepared to answer back. In the words of Uri Avneri, this was the beginning of de-Ben-Gurionisation.

Ben-Gurion left Mapai, the party that he founded in 1930 and led a breakaway faction, Rafi. It included all his disciples, Moshe Dayan, Shimon Peres, Chaim Herzog, Teddy Kollek, Yitzhak Navon and many others. Rafi essentially marked a move to the Right and pointed to the future defection of part of the labour movement that led to the establishment of the Likud. As Shilon records, there was talk about electoral pacts with the Liberals, Gahal and the National Religious. There was no mention of socialism in its platform and Ben-Gurion wished to position Rafi to the left of Begin’s Gahal and to the right of Eshkol’s Mapai. Rafi, however, attained only 10 seats in the 1965 election – an abysmal conclusion to a concerted campaign to replace Mapai. It became known as ‘the party of the princes’ since there was no possibility that Peres or Dayan could now succeed to the premiership from such a small grouping.

In the run-up to the Six-Day War, Begin wanted Ben-Gurion to return to the premiership, but the resentment against Ben-Gurion that the leadership of Mapai still exhibited was all-pervading. Instead, Ben-Gurion agreed that Rafi should join a wall-to-wall coalition and that Dayan be appointed minister of defence. The success in the Six-Day War suggested that Ben-Gurion was not indispensable, that his followers could cope by themselves, have their own ideas and act independently. It led a year later to the return of all the Rafi MKs – with the notable exception of Ben-Gurion himself – and to the formation of the new Labor Party. Dayan, Peres, Herzog and the others had essentially renounced the historical patronage of their mentor, David Ben-Gurion. Despite the magnetic attraction towards him, the allure of political office proved stronger.

Shilon argues that Ben-Gurion used his influence before the war in an unsuccessful effort to avert a conflict – which he believed would end in disaster. He blamed Eshkol for authorising an Israel Defence Forces (IDF) raid on the Jordanian village of Samo’a in November 1966, which he believed had undermined King Hussein Bin Talal and left him no option but to strengthen his ties with the then Egyptian President Gamal Abdel Nasser. It decreased Hussein’s natural tendency to avoid any clash in a time of war.

Ben-Gurion’s approach tended to be one of pragmatic endeavour. Following the victory of 1967, Ben-Gurion called for the retention of the Golan Heights for strategic reasons and for Jerusalem and Hebron – which he called ‘the sister of Jerusalem’ – for historical ones. He agreed with settlement building in the conquered territories, but crucially argued that they could remain ‘under foreign rule’ in the future. He did not advocate the annexation of the West Bank – primarily for demographic reasons rather than for moral ones. If the Arab states however indicated a real interest in peace, then the West Bank and Sinai could be returned. But he added that this would be unlikely to occur in the near future – and therefore Israelis should start settling the environs of Hebron, Gaza and Sharm el-Sheikh.

At that point in time, he, like Golda Meir, did not believe in the existence of a Palestinian people. It was ‘a bluff designed to defame Israel’. Instead, he advocated an autonomous status for the West Bank in a federated arrangement with both Israel and Jordan.

The second part of Shilon’s detailed book looks at Ben-Gurion’s post-1967 life outside the political bear-pit. The Rafi remnant established the State List which won 4 seats in the 1969 election and Ben-Gurion left the Knesset shortly afterwards. He remained at Sde Boker – his personal bodyguard was Yehoshua Cohen, the assassin of Folke Bernadotte in 1948.

Even in his last years, Ben-Gurion practiced the habit of a lifetime and read mainly non-fiction and hardly any fiction. He spent his days writing and rearranging his voluminous archives. Even so, in an interview, he listed the three books which influenced him as Avraham Mapu’s Ahavat Zion, Harriet Beecher Stowes’ Uncle Tom’s Cabin and Leo Tolstoy’s Resurrection.

Politics and history continued to enthral him. At times Ben-Gurion said that he felt ‘like a forty year old’ while at others he felt his age with an accompanying lack of energy.

Ben-Gurion immersed himself in constructing a utopian vision of a future, but framed by the cruel reality of the Middle East conflict. His reputation rested on his perceived ability to predict what came next – as a shrewd and sophisticated political calculating machine. During his life’s journey, he had always placed the nation before his own family – and despite the good intentions of his wife, Paula, his children and his wider family felt distant from him. He once remarked incisively that there was no present – only the past and the future. As Ben-Gurion himself recognised, he was the archetypal absentee father. His daughter, Renana, requested that her parents not attend her wedding because she wanted to avoid the presence of politicians. His surviving brother, Michel, ran a small store on Sderot Nordau in Tel Aviv and had little contact with Ben-Gurion.

Apart from Kings David, Uzziah and Jeroboam II, Ben-Gurion did not exhibit any great respect for the political leadership of ancient Israel. But he did identify with the prophet Jeremiah, an independently-minded seer and the forecaster of destruction. In contemporary times, he admired Charles De Gaulle because he took decisions. Winston Churchill came a close second and was appreciated for his leadership during the war against Nazism. He admired the ability of the British to sustain the basic tenets of freedom and democracy in a time of war and even then uphold the right to criticise a government. He also marvelled at the manner in which Churchill was pushed out of office in 1945 – despite everything that had gone before during the previous five years:

He wasn’t elected to the premiership and rightly so. He didn’t want to take apart the British Empire; he refused to grant India its independence and was willing to start a war. This shows you what healthy and wonderful political instincts the English have.

Ben-Gurion famously promoted biblical knowledge – as cultural and intellectual history – during the early years of the state. Yet since childhood, Ben-Gurion had imbibed the philosophy of Baruch Spinoza and was inspired by the rationalism of his writings. He never went to synagogue apart from Yom Kippur and believed that Jesus and his teachings should be added to the Jewish canon. And yet he commented in his last years that he believed in ‘the truth of God more than in any other truth’. But he added that ‘my God is not the God of the Satmar Rebbe’.

Avi Shilon has uncovered a little known period in Israeli history – warts and all. It is unfortunate that he has not been served well by a poor translation from the Hebrew original. He has reminded us of Ben-Gurion’s uniqueness, his flaws and his greatness. It is easy to either love him or to hate him. Shilon has injected a realistic complexity into the imagery of this enigmatic and probably shy man who – without exaggeration – changed the course of Jewish history.

By Israel Bartal
Shlomo Sand’s political treatise, The Invention of the Land of Israel, is another link in... Read more > Autumn 2016

By Steven J. Zipperstein
'Had there been telephones back then,’ recalled a close aide years later, ‘Begin would never... Read more > Autumn 2016