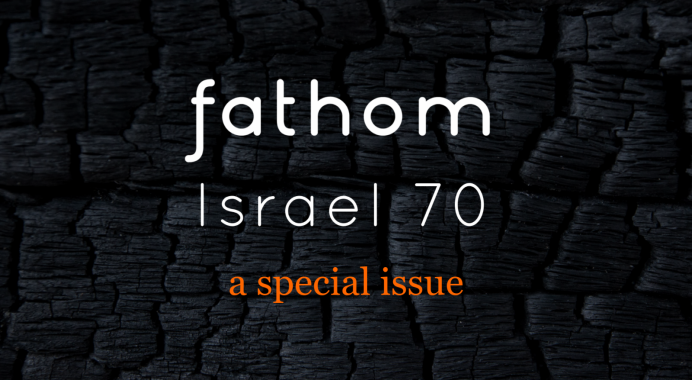 Einat Wilf and Shany Mor, both advisory editors of the journal, they set the tone for the entire collection by inviting us to celebrate 70 years of … argument! Wilf is a Senior Fellow with the Jewish People Policy Institute and an Adjunct Fellow at the Washington Institute. She served as a member of the Knesset for the Labour Party and Independence from 2010 to 2013. Mor is a former Director for Foreign Policy on the Israeli National Security Council. Zionism and the State of Israel, they claim, are unique examples of a movement of national liberation, and a state, established as ongoing debates. Democratic debate about the character and future of the state has been at once a necessity, a virtue, a strength and a saving grace; in fact, they say, it has defined the country. They look forward to the next 70 years of argument.

Gidi Grinstein and Ari Afilalo argue that despite all the security challenges facing Israel, the core ethos of Israel’s existence is fundamentally challenged by one ‘internal’ crisis, which is brewing to potentially transform it altogether: Israel’s relations with World Jewry. They explore how and why the relationship between Israel and the Jewish diaspora has hit a new low and suggest a new vision for how Israel must treat and respect the Jewish Diaspora if it wishes to still be recognised as the home for the Jewish people. Grinstein is the President and Founder of the Reut Institute. Ari Afilalo is a professor f law at Rutgers University.

Sima Shine and Ezra Friedman map the shift in Israel foreign policy strategy over the past 50 years and the state of play today. Shine joined INSS as a senior research fellow following her departure from the Israel’s Ministry of Strategic Affairs where she served as deputy director general, responsible for the Iranian file (2009-2015). Prior to that, she served as deputy head of the National Security Council for Strategic Affairs (2008-2009). Friedman is a project manager at the INSS. We also asked the former head of Mossad Efraim Halevy, astute analyst and regular Fathom contributor, to assess Israel’s security environment at 70.

Read the contrasting perspectives of US negotiator Dennis Ross; B’Tselem Director Hagai El-Ad; Shalom Lipner, a nonresident senior fellow in the Center for Middle East Policy at the Brookings Institution, and Ziad Darwish, a Palestinian journalist and a member of the Palestinian Committee for Interaction with the Israeli Society.

We asked a range of young Israelis about their worries for Israel’s present and hopes for Israel’s future. The results were inspiring and challenging in equal measure. Read Asaf Yusufov, a former counsellor and manager at Tel Aviv’s Barnoar LGBTQ Youth Club; Tal Harris, the spokesperson of MK Amir Peretz; Rob Pinfold, a Neubauer Research Associate at the INSS and a Doctoral Fellow at the University of Haifa; Aron Kalman, Naftali Bennett’s policy advisor; Tel Aviv Widrich, director of operations for Darkenu; Yaniv Yitzchak, head of Mechina in Yerucham, a development town in southern Israel who runs an educational program that prepares men and women for the army; Yair Zivan, foreign policy adviser to Yair Lapid; Hen Mazzig, a writer, speaker and activist whose articles were featured in the International Business Times, The Jerusalem Post, Haaretz and many other publications; Netta Geist, an advisor to the CEO of the city of Givatyim and a former advisor to Stav Shaffir; Elai Rettig, a Neubauer Research Fellow at the INSS and a Ph.D. Candidate and lecturer at the School of Political Science in the University of Haifa; and Daniel Levi, who runs a mechina in Jerusalem, part of which is based on the teaching of the late Rabbi Menachem Froman. More young Israeli voices will join the discussion over the Spring.

Israel was once a world leader in development assistance and a model for African states to follow. There are signs it can become both again, with the explosion of new Israeli development actors and programs. To fond out more Fathom editors talked to Sivan Yaari, Head of Innovation-Africa, which brings innovative Israeli solar and water technologies to remote African villages. Dr. Aliza Inbal, the leading Israeli expert in international development and Director of the Pears Programme for Global Innovation, and Ophelie Namiech, Senior Director of Organizational Learning and Training at IsraAID, the leading Israeli Aid NGO see a new vision emerging: government, the private sector and civil society joining forces to harness Israel’s innovative capacity.

In ‘the back of the book’ you will find five book reviews: Asher Susser on Ian Black’s Enemies and Neighbours: Arabs and Jews in Palestine and Israel, 1917-2017; Cary Nelson’s highly critical review of Susaina Maira’s Boycott! The Academy and Justice for Palestine; Paul Iddon, a freelance journalist based in Erbil, Iraqi Kurdistan, on Being Kurdish in a Hostile World by Ayub Nuri; Michael Stephens, the Research Fellow for Middle East Studies and Head of RUSI Qatar, reviews Jonathan Spyer’s Days of the Fall: A Reporter’s Journey in the Syria and Iraq Wars; as well as Kyle Orton, Middle East analyst and Research Fellow with the Henry Jackson Society, on Carter Malkasian’s Illusions of Victory.