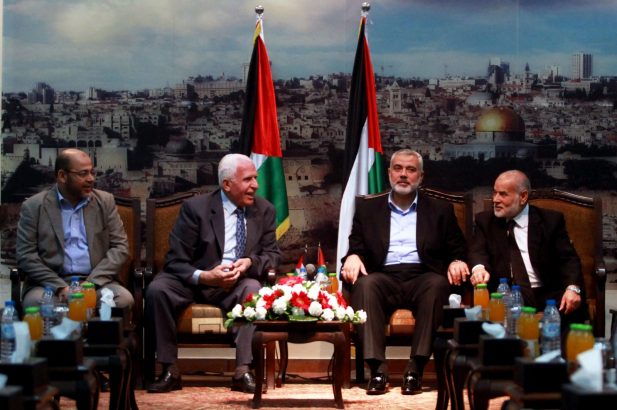 Questions have been raised about the direction and intentions of Hamas since the signing of a reconciliation agreement with rival Palestinian faction Fatah at the end of April. To explore this issue, Fathom deputy editor Toby Greene interviewed Dr. Benedetta Berti, a fellow at the Institute for National Security Studies (INSS) at Tel Aviv University and co-author of a new book, Hezbollah and Hamas: A Comparative Study, published by Johns Hopkins University Press. The interview took place on 15 May 2014.

Toby Greene: We have seen reconciliation tried many times before. Is there something different this time on the Hamas side of the equation?

Benedetta Berti: Since Hamas was first elected in 2006 we have had a series of reconciliation deals that were not implemented. However, things are somewhat different this time because both sides are coming to the table from a point of weakness, especially Hamas.

Hamas’s position has changed dramatically in the last year. At the beginning of the Arab awakenings it seemed that Hamas was largely benefitting because it found a strong new alliance with Egypt under the Muslim Brotherhood. That situation was reversed with the demise of the Muslim Brotherhood and the rise of a new government which was highly antagonistic, and has been cracking down on Hamas economically and politically.

Hamas finds itself isolated and cannot rely on its traditional supporters because even Iran today is cooler towards Hamas. This weakness represents a powerful incentive for Hamas to do something popular domestically, and that is reconciliation.

TG: Can you imagine a situation in which Hamas will relinquish any element of its control of the Gaza Strip?

BB: That’s the acid test of the reconciliation deal. There are elements that could be implemented – like a unity government of technocrats, which could eventually open up the path to future elections. But where the parties have not seen eye to eye so far is on their mutual desire to keep control of Gaza, in the case of Hamas, and the West Bank, in the case of Fatah.

Some scepticism is therefore in order, especially when you look at the contentious issue of what to do with the security sector which Hamas has created in Gaza. The deal is silent about that because it is an area where Hamas is not yet ready to compromise. In the long term, the prospects for either side relinquishing power do not look good.

TG: Do you see any underlying shift away from the hard-line opposition to the peace process and the extreme antisemitism that has characterised Hamas ideology until now?

BB: Since the beginning of the organisation there have been internal debates on a number of key issues including how to deal with Israel, whether to recognise Israel de facto (not de jure), as well as how to deal with the peace process. The core elements of Hamas’s ideology have not shifted, but there is an internal conflict in the organisation about how to accommodate ideology with political interests and pragmatism.

After Hamas took control of Gaza they were faced with the reality that whilst their ideology pushed them to attack Israel, political interests pushed them to keep quiet to avoid Israeli attacks on Gaza. We have seen over time that Hamas has come to some tactical understandings that have led to a ceasefire. However, this has been one of the main challenges for the group and we will see them continue to struggle with the tension between ideology and pragmatism in the future.

TG: You work within one of Israel’s leading strategic think tanks – can you give a sense of the debate in Israeli strategic and security policy circles around Hamas.

BB: There are a range of views, as on most security issues in Israel. There are those who are very sceptical about Hamas’s potential to be a tactical, let alone a strategic partner for Israel, that camp is already profoundly sceptical towards the reconciliation deal and thinks it could hinder any progress in solving the Israeli-Palestinian conflict. That’s the mainstream position of the government also.

However, there are security and policy experts who question this notion of Hamas as being only ideological and they try to understand the group in terms of its cost benefit decision-making processes. According to this camp, the reconciliation deal should be seen as a potential opportunity to bring Hamas – the second largest Palestinian group – into a peace process. This is on the understanding that in the long term there will be no sustainable peace if we don’t get all the main parties to the table and there will be no long term sustainable Palestinians state without reintegrating Gaza and the West Bank.

TG: There are reports that since the fall of the Muslim Brotherhood in Egypt, Hamas is trying to rebuild its strategic relations with Iran. What do you think is the significance of that and is it consistent with the unity deal with Fatah?

BB: It is consistent with Hamas’s strategy since they lost their main regional ally in Egypt under the Muslim Brotherhood. They have been trying to reconnect with Iran, because the relationship deteriorated after Hamas decided to leave Damascus during the Syrian Civil War. But they are also trying to sustain their relationship with Qatar and reach out to the new government in Egypt. It is Hamas’s strategy to try and improve its regional position, which explains the outreach to Egypt and Iran, and it also explains the reconciliation deal.

TG: We hear Israeli reports that whilst Hamas has been observing a ceasefire in the Gaza Strip it continues to pursue armed activity in the West Bank. What do you see as the future of that approach, if a unity deal is formed?

BB: If we have a unity government, Hamas will have to consider its next steps carefully. Some security experts in Israel have been worried that, because Hamas has an incentive to prevent rocket firing from the Gaza Strip, to avoid retaliation, they may be fuelling terrorist activities in the West Bank and trying to start a third Intifada. Although there have been convincing reports of such activities, it is important to say that Hamas understands that an exponential rise in terrorism in the West Bank initiated by Hamas, would lead to direct repercussions in Gaza. With respect to the reconciliation deal, Hamas understands that sabotaging the West Bank would also most likely undermine the reconciliation deal.

TG: Over the last couple of years we have seen a lot of speculation about the internal politics of Hamas. How coherent is the organisation internally?

BB: I think Hamas is holding together but in a condition of perpetual internal dialogue, which at times becomes very animated and escalates to internal conflict. Since the formative stages of the organisation, we have seen recurring episodes of internal tension about issues such as keeping ceasefires; dealing de facto with Israel; and alternating between political and military strategies.

There are internal factions, organised not just around internal and external leaderships, but also around the military leadership, the political leadership, and there are personality clashes. Regarding the reconciliation deal, however, nobody significant in Hamas has expressed disappointment, which is very different from the last reconciliation deal in February 2012. Then, Khaled Mashaal signed a deal and key leaders in Gaza went on record to say they did not recognise it and that Mashaal did not have the authority to negotiate. Now we do not see anything similar, suggesting there is more internal support for this deal.