Fathom > June 2022 > The Boston Mapping Project: BDS and the Paranoid Style of Politics

The Boston Mapping Project: BDS and the Paranoid Style of Politics

by Richard L. Cravatts
BACK 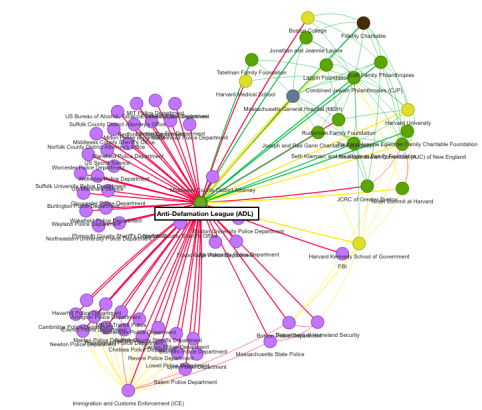 Graph of links between the ADL, police agencies, universities and NGOs. Image is part of The Boston Mapping Project..

Richard L. Cravatts is President Emeritus of Scholars for Peace in the Middle East.

The Boston ‘Mapping Project’ proves conclusively that many anti-Israel activists inhabit an ideological universe of conspiracism and nihilistic hatred, both for Israel and the Jewish community as a whole. The map plots the actual physical locations and addresses of Jewish and Zionist institutions, universities, organisations, and individuals who are to be targeted. 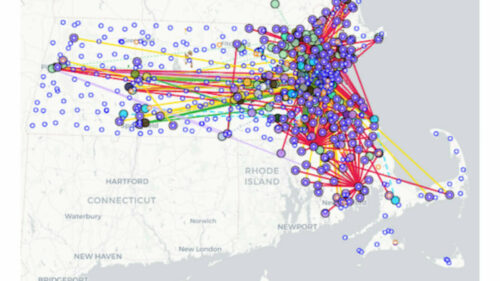 The Mapping Project is a call for dangerous, even violent, action against those targeted. ‘As we built this project,’ the BDS Boston post announced, ‘we were constantly asking ourselves: What actions can BDS activists take to meaningfully narrow, if not cut off, supply lines of material and ideological sustenance flowing from the Boston area to the zionist [sic] state? How can we impose a real material cost on the zionist [sic] project…?’

The notion of a manipulative, powerful, and malign ‘Israel Lobby’ has been part of the anti-Israel dialogue for some time, at least since the publication of a book with that title published by Stephen Walt and John Mearsheimer in 2008. That book focused on the alleged power of Israel in bending U.S. lawmakers to its will, forcing it to behave, diplomatically and economically, in ways that harmed the United States and only benefited Israel.

The Mapping Project goes beyond that by linking a bucket full of Jewish communal organisations and others as furtive, conspiratorial agents of oppression, not only concerning the long-suffering Palestinians but other groups supposedly victimised by this Jewish cabal.

The Mapping Project characterises pro-Israel lobbying by Jewish institutions and organisations as ‘manipulation’—coercive, underhanded actions whose end result would not otherwise honestly, fairly, or reasonably be achieved—paralleling classic anti-Semitic canards, such as the Protocols of the Elders of Zion, that also purported to reveal the intention of Jews to furtively rule and dominate the globe.

This style of politics—revealing the machinations of a subversive group or groups to a world of dupes who cannot see—is a reprise of what was characterised in 1964 by historian Richard Hofstadter as ‘the paranoid style’ of politics and more recently as a culture of conspiracism by Michael Barkun. The latter defines conspiracism as ‘first and foremost, an explanation of politics’ which ‘purports to locate and identify the true loci of power and thereby illuminate previously hidden decision making.’ In this paranoid world view the conspirators, often referred to as a ‘shadow government’ are held to ‘operate a concealed political system behind the visible one, whose functionaries are either ciphers or puppets.’ Zionists and Jews, of course, are at the center of all of this, using their allegedly limitless influence and finances to benefit Jews.

By publishing the names and physical addresses of Boston Jews the intent of the map’s creators is clear: ‘Our goal in pursuing this collective mapping was to reveal the local entities and networks that enact devastation, so we can dismantle them,’ it stated. ‘Every entity has an address, every network can be disrupted [emphasis added].’

The days of pretending that criticism of the Jewish state is never anti-Semitic seem to be coming to an end. Now, apparently, activists feel comfortable enough to engage in public attacks on named Jews and Jewish communal and civil rights organisations as part of their contention that it is Jews per se, not just the Jewish state, who are guiding and maintaining a system of global oppression.

This is not the first ‘mapping project’. David Miller, former professor of political sociology in the School for Policy Studies at Britain’s Bristol University, enraged Jewish students and others with his vicious attacks on Zionism, Israel, and Jewish organisations in England. In lecture slides used in Miller’s ‘Harms of the Powerful’ module, Jewish students perceived anti-Semitic tropes about Jewish power, malignancy, and manipulation. 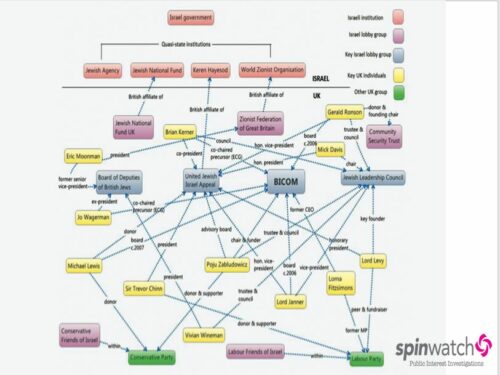 The slide which drew the most attention, which perhaps served as the model for the Mapping Project’s version, was an elaborate diagram depicting a spider’s web of dozens of organisations, all listed as under the influence or control of the Israeli government, but until now hidden from sight. In Miller’s paranoid fantasy he had revealed a nefarious and powerful and malign ‘British Zionist scene’.

The Anti-Defamation League noted there were 2,717 anti-Semitic incidents in 2021, representing an increase of 34 per cent over 2020, which was itself an all-time high. So when the Mapping Project promises to ‘disrupt the network’ they have just identified, it is no surprise that it is heard as a none too veiled threat against some of the individuals and institutions they name. And they are right to do so. ‘We see our map and associated database as a resource for gathering intelligence on the agents of oppression’ and to engage in ‘resistance in all its forms’, [emphasis added].

‘We are all sufferers from history,’ Hofstadter observed, ‘but the paranoid is a double sufferer, since he is afflicted not only by the real world, with the rest of us, but by his fantasies as well.’ True, but save your pity for the victims: paranoia and fantasies about Jewish power have been with us for millennia. The Boston Mapping Project is the latest permutation. We have, literally, been warned. 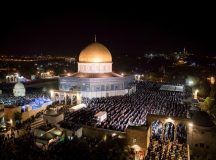 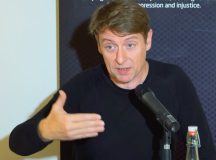 By David Hirsh
According to Bristol University Professor David Miller, ‘Britain is in the grip of an assault... Read more > June 2022 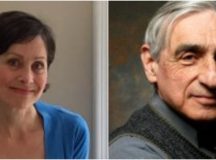 How Best to Combat Antisemitism and Anti-Zionism on...