by Richard Pater
BACK 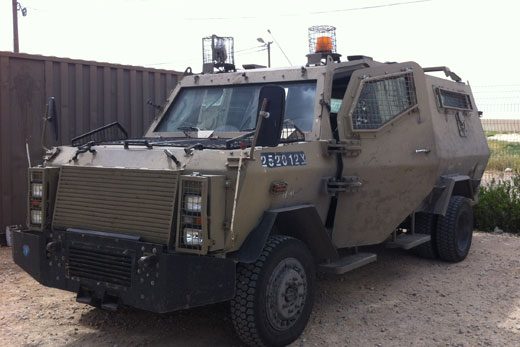 It’s Friday lunchtime in early summer, we are in the southern Hebron hills and it’s hot. I’m seated in the back of an armoured transport vehicle with six other guys, rumbling along as we steadily climb a picturesque mountainous road, with a largely unspoilt biblical landscape as a background. I am in full combat kit, with riot control gear, helmet and a protective visor by my feet.

This is not my typical Friday. I would usually be having lunch with the family, having spent my working week seated in a cool air conditioned office. The other guys feel similarly out of place.A collection of professionals from across the country: a lawyer from Tel Aviv, an estate agent from the North, a building contractor from Ashkelon and a couple who work in Israel’s booming hi-tech sector from either end of the country. Apart from the driver, who is a career soldier, we are all Israel Defence Force (IDF) reservists doing our annual stint of service in the West Bank.

Twenty minutes earlier we crossed over the Green Line and are heading for a village in Area B (Palestinian civil control, IDF security control). At the edge of this particular village there is a traffic triangle that causes cars to slow down. This is a convenient spot for local Palestinian youths to throw stones (or worse) at Jewish settlers on their way home or at IDF jeeps that patrol the road. This has been a weekly event for over a year.

This village has two large chamulot (clans), one whose elders will meet with IDF commanders and civil administration, cordial and professional, the other less accommodating. The neighbouring village is known to be affiliated with Hamas. The phenomenon of attacking cars with stones and Molotov cocktails or disrupting traffic by oil spills, burning tyres or nails on the road has been on the increase. In our sector there were 12 such events recorded in 2012 and already six in the first quarter of 2013.

On this Friday the first stone is thrown at about 1pm (slightly earlier than the week before) by teenagers leaving school and prayers. The stone throwers are well versed in IDF procedures and know the IDF will now enter the village in an effort to prevent further disruption. Hence we have been called on to enter the fray. This is our debut in this particular theatre. As in previous weeks, the IDF tactic is to enter the village and take over an unfinished, uninhabited house, circumventing the junction and drawing the agitator’s attention and wrath. As we enter the house we are greeted by a large hail of stones as well as shouting and taunts in Arabic. Once inside, it takes a couple of moments to acclimatise, get our bearings, and establish our perimeters. Three young conscript soldiers in their late teens join us in the house from the border police. They are more wary and circumspect – I also notice that their equipment is more up to date and they have better gadgets than we do.

At the back of the house are empty fields and in the distance sit 30 or so youths enjoying the spectacle. Closer to us are about 20 teenagers that come in waves, a handful at a time, to within 30 or 40 metres and pelt the house with large rocks. Occasionally we reply with volleys of non-lethal ammunition at our disposal, tear gas and stun grenades, to cause them to race away enthusiastically only to return slightly more gingerly, minutes later, once the smoke has cleared. The border police guys become tense. One of them, of Ethiopian descent, is particularly distressed. One of the others who speaks Arabic explains that the stone throwers chants were vulgar and racist, and had been directed at their Ethiopian friend. Their response is to urge us to raise the stakes and fire rubber bullets, but we ignore them.

For my team, it’s stoic professionalism. We have all served inside Gaza or Lebanon, most in both, as well as numerous assignments in the West Bank. Our only motivation is to get home safe. The ultimate objective for the stone throwers is to injure one of us; to make an IDF soldier bleed. A token, a small trophy, would have been a great coup for them. Our objective is the opposite, to provide a distraction from targeting the road and defuse the situation. Even the firing of a rubber bullet is considered an escalation and requires the approval of the Battalion commander, a Lt. Col responsible for the whole sector.

We know from experience when that would be necessary and we understand the ramifications if we fire rubber bullets and the procedures that would then follow: alerting medical backup, attending to anyone wounded by our fire and coordinating his extraction from the field. All for the arrest of a teenager throwing rocks. Not worth it in our view, or that of our senior commanders, who have an overarching strategic approach of ‘restraint.’

As we watched the stone throwers prepare for another assault we could clearly identify the ringleaders. We discussed the advantages of soldiers carrying cameras. We could then photograph the instigators and potentially arrest them at a later date. I silently speculate whether transforming the neglected field into a cricket pitch might be a more constructive way for these guys to vent their anger. On the evidence of their ability to throw, they would probably be good fast bowlers.

The event lasts about five hours. In that time thousands of large rocks crash into the facade of the house, fall short or fly over the top. A few came through the windows. In a quite surreal moment, the owner of the house arrives and decides this is an appropriate moment to make some adjustments in his garden, nonchalantly ignoring both sets of protagonists. We politely ask him to wait a little longer, to which he reluctantly agrees. Eventually, the stone throwers run out of energy and skulk off home.

We return to base that night inside the Green Line for a thorough debrief. Not the bluster the media sometimes portrays. As has always been my experience of IDF operations, it is professional, thorough, detailed and precise.

Those who serve in the reserves are a dying breed. Once considered the benchmark of ‘Israeliness’, only 5 per cent of the population served more than a week last year. For me it still has many benefits. First of all, despite the depleted numbers, it is still a fascinating opportunity to interact with a real cross section of society and forge unlikely friendships with people I would otherwise not have met. It is also a kind of privilege to spend time in those remote spots, where most Israelis will never go to appreciate the spectacular views and reflect on how much I do not know about the flora and fauna described in the Bible, and my favourite: discovering the wild tortoises.

It is also healthy to challenge oneself politically; to witness the occupation up close. There was no consensus among our company, but a majority felt this tour of duty had moved them more to the left. There is a duality, a contradiction, in how many of us regard the fields and hills of Judea. On the one hand, this is the cradle of Jewish civilization, steeped in meaning and history. On the other, the cost to Israeli society of sustaining our presence in some of the more remote, outlying areas of the Land of Israel is too high. The opportunity cost of investing a similar amount into our own society is too great. I understand and can justify why we are there now, but in the long term it seems untenable.

For a unit like mine, which may well get scrapped as the IDF moves into a more hi-tech age, we are anachronistic. We are traditionally trained, skilled at fighting wars against a well armed enemy in uniform. We are able to adapt to new challenges. But target practice for kids throwing stones? We can do better than that.

Postscript: After we left the sector, the battalions that replaced us (also from my brigade) encountered rapidly escalating events including the throwing of a Molotov cocktail that burned down a jeep and injured four soldiers at that same traffic triangle.

By Jonathan Spyer
The end of the Assad regime will probably not mark the end of the civil... Read more > Autumn 2013

By Alexander Yakobson
The Israel Democracy Institute’s annual survey reveals a gulf between the sentiments of many Israeli... Read more > Autumn 2013

By Alan Mendoza
One of the leading neoconservative intellectuals of the last half century, Richard Perle was Assistant... Read more > Autumn 2013

By Ben Cohen
Amid the fanfare about the interim agreement reached in Geneva in November 2013 over Iran’s... Read more > Autumn 2013